Only a single panel appearance from Doctor Doom in this story, which starts with another of those warnings to the reader that they haven't picked up the wrong comic:

I assume this story is carried over from an issue of The Avengers, though oddly there's no footnotes to say so, at least not in the Marvel Unlimited version. The story itself sees Thor and Iron Man leaving the other Avengers behind in a spaceship while they fly out to stop a computer called Faust from destroying the planet. To be honest it all seems like a pretty straightforward fight, but it does cause quite a lot of laser beams and explosions to go off in the skies around the world, and these are noticed by a selection of very mid-70s Marvel characters, including Captain Marvel, Spider-man, Nova, Daredevil, Shang-Chi and of course Doctor Doom. 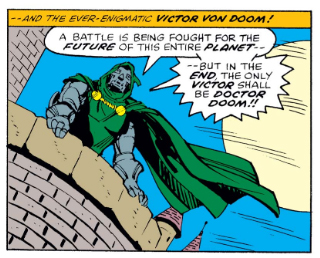 Is he making the "Victor" pun on purpose, do you think?

That list of charcters is quite interesting - every one of them apart from Doom has a series of his own, which might signify his existence as a roving character, especially compared to Nova and Shang-Chi (and to some extent Captain Marvel) who are lesser characters there to remind readers of their existence. Also, as ever in these situations, Doom is there to show that the battle is being watched all over the world, not just in New York.

That's all the Doom we get in this issue, and there's not a whole lot more to come next time, in a prime example of Bill Mantlo's "Dreaded Deadline Doom" work!