Who In The World Is The Invincible Man?

Since Super-Villain Team-Up ended Doom has drifted away from mainstream continuity. The final instalment of the series of solo Doom stories that began way back in Marvel Super-Heroes #20 ended in The Champions #16 with him paralysed by his own cunning, but then he reappeared a couple of months later apparently safe and sound, interacting with The Prime Mover in Master Of Kung Fu #59, then a little while after that he was back in Latveria, watching the skies as Thor and Iron Man saved the world, with no reference to either of the two previous tales. It feels like he's come loose from continuity, but now, after an absence of two years, he's back in the pages of 'The Fantastic Four' for a story that will have him very much in a lead role.

He doesn't appear until the very last page of this issue, but clues to his presence are laid throughout. In fact, hints have been laid for several issues prior to this, in an ongoing story that sees The Fantastic Four splitting up and a de-powered Mr Fantastic going to work for a mysterious corporation who, he's told, are working for "The Government". He's supposed to be a genius, but at no point does he ask exactly who's employing him, and the comic keeps cutting away to a mysterious figure, watching from a distance.

He's talking another nation conquering the world whilst watching a video screen... but then again he's also wearing a normal suit, so it can't be Doom, can it? Similar hints follow in this issue, as we see a shadowy figure referring to an underling called "Hauptmann" as a "dolt". 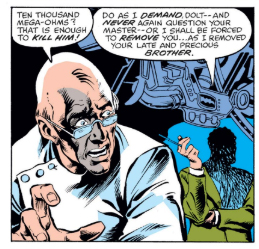 Meanwhile, the rest of the FF are in Hollywood, where they're attacked by their old enemy The Invincible Man. Last time he appeared he was a Skrull masquerading as Sue and Johnny's father, but this time he turns out to be ... Reed Richards? 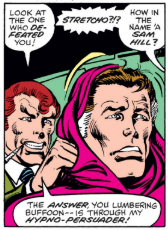 When we finally see the face of the mysterious character who has been employing Reed for the past few months, standing behind him above, he turns out to look oddly familiar. 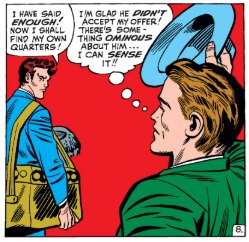 However, just when we're ready to believe that this is a Doctor Doom who is somehow cured of his facial disfigurement while also unrecognisable to his college friend, this same individual does something Doom would never do - he goes and reports to his boss. 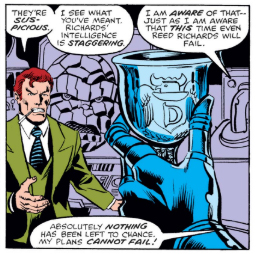 We're looking at an armoured hand holding a goblet with Doctor Doom's crest on it, yet still Marv Wolfman and Keith Pollard don't actually name him. It gets even more obvious a few pages later when Sue, Johnny and Ben escape from captivity and fight a bunch of purple-uniformed metal-helmeted goons who look very much like Latverian soldiers (or robots, depending on who's writing them). 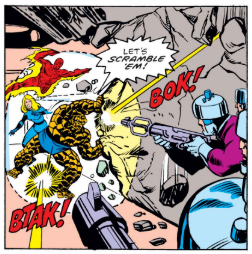 The trio burst into another room where a mysterious gloved hand blasts them with sleeping gas, leading to a final page reveal of who has been behind it all. 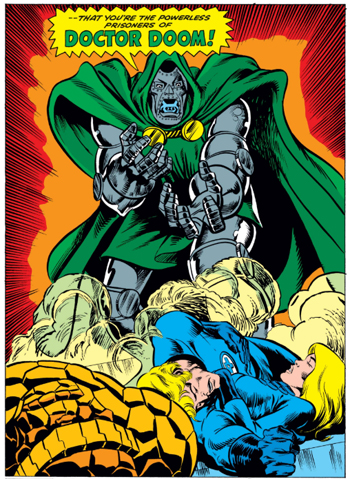 As so often happens, this is presented as a massive shocker, despite the fact that it's been blindingly obvious for several pages that it's Doctor Doom!

With his scream of triumph and mouth wide open in mad joy he's drawn to look like a throwback to the mad despot of Lee and Kirby's later years, rather than the more complex, thoughtful character who's been appearing more recently, but perhaps that's just all the excitement getting to him. We'll find out for ourselves... next time!