This is a comic that feels quite special to me, as it was part of my very first Academic Output in Comics Studies, when I presented a paper called Latverian Incursions: Dr Doom and Cold War Politics at the Eighth International Graphic Novel, Comics Conference and Bandes Dessinées Society Conference in Dundee in 2017. It feels like a long old time ago, but as it happens I'm off to do another talk, this time about periodising "The Marvel Age", at Comics Forum in Leeds tomorrow!

That first paper was all about the way that the portrayal of Doctor Doom changed over time as American attitudes to Eastern Europe developed during the Cold War. The actual comics starts with Mr Fantastic making his way into Latveria, where he discovers a country that's markedly different from the original version seen way back in Fantastic Four Annual #2. Back then it was an olde-worlde "fairytale kingdom", but now it's an Orwellian state, constantly watched over by unshaven goons and ruled with fear. 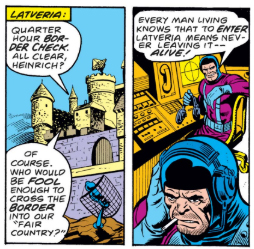 Mr Fantastic is immediately attacked by robot guards and thrown, unconscious, into a pond. "Will a man who has survived countless intergalactic battles die in a most ignoble manner?" asks the caption. The answer is "no", as in the very next panel he's dragged out by some locals who intend to "bring him to our leader".

Doom, meanwhile, is showing off his castle to the rest of the Fantastic Four while his people prepare for the coronation of his son. He takes them out onto the balcony of his residence to look at a parade rehearsing.

Referring to his people as "mindless cretins, prancing like headless chickens" is a very different attitude to his previously professed love for his people, and it's very much more in line with American attitudes of the time, with East European rulers (not unreasonably) viewed as propaganda-spouting despots who ruled over the masses without a thought for their welfare.

Alicia is still working on Doom's sculpture, which is designed to show Doom before he was "so horribly scarred". It's meant to be a gift to the United Nations, so he wants it to show him at his best in order to persuade them that Latveria itself is not scarred... or something. It doesn't make any sense to be honest and (spoilers) won't make any more sense later on either!

What does make a little bit more sense, comparitively speaking anyway, is the next stage of Doom's plan, which involves putting the Fantastic Four into "transference globes" which will allow him to transmit their powers into the body of his son. 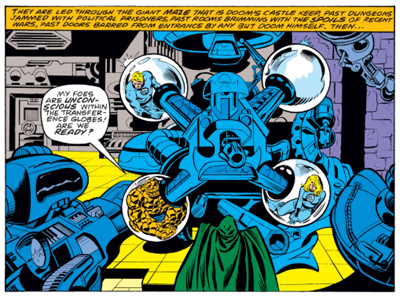 There's four globes there, which finally explains why Doom was spending so much time and money helping Mr Fantastic to get his powers back - so that they could then be given to his son. Talking of Mr Fantastic, he has woken up and been introduced to Zorba, the leader of the Latverian resistance who saved him. Together they are making their way towards Doom's castle, avoiding the gaze of more goons.

I like the way that Marv Wolfman gives the goons back stories and inner lives. I certainly hope this doesn't mean anything awful is going to happen to them! There's more to come, when Mr Fantastic manages to sneak up on a couple of guards who are moaning about how dull it is, working as hired goons for a super-villain. 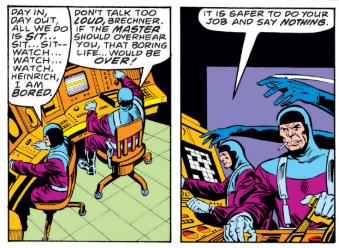 We've all been there Brechner!

Mr Fantastic leads the resistance army into the castle, only for most of them to get trapped in a gas filled room. Only he and Zorba make it out, much to Zorba's dismay. This leads to him requiring a talking to from an all-American ally. 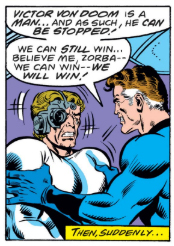 In my presentation I used this as an example of America (in the shape of Mr Fantastic) having to literally shake some sense into the revolutionary forces trying to overthrow Communism. It's a metaphor for the CIA intervening, because only with American leadership can the world become free! There's more of this when Reed confronts the scientist Hauptmann, who knows he was wrong to work for Doom, but was insufficiently American to resist. 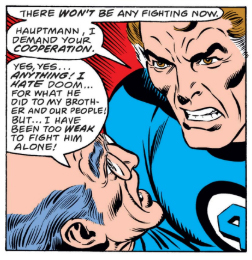 The action cuts to Doom's chamber, where he's back at the sonic keyboard we last saw back in Fantastic Four #85 (which really does seem to be the key reference for this storyline). 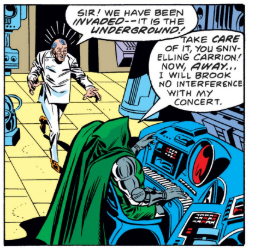 Hauptmann enters to tell Doom what's going on, but he's fooling nobody - Doom instantly recognises him as Mr Fantastic in disguise and zaps him with sleeping gas. Clearly he has a much better memory for faces than his adversary! 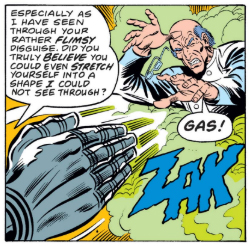 The story ends with all four members of The Fantastic Four captured and their powers being transferred into Doom's son. It looks like nothing can stop him now - but we'll have to wait a while to find out what happens, as next time we're off to World War Two and some classic Roy Thomas revisionism!