This is the first of two appearances by Doctor Doom in "The New Fantastic Four", the 1978 cartoon series by DePatie Freleng which is perhaps best remembered for featuring HERBIE The Robot rather than the Human Torch. There was a widespread belief at the time that this was because the television networks worried that kids would be inspired to set themselves on fire to be like their hero if they saw it on TV, but this was wrong on two counts - firstly because the rights to use the Human Torch had already gone elsewhere, meaning he couldn't be shown, and secondly because nobody would ever be inspired by anything in this show. It's not quite as terrible as Doom's first TV appearance in The Marvel Superheroes, but it's not far off.

It would be bad enough to have to watch this as it is, even without the knowledge that this dreary, half-arsed load of rubbish was actually the final Lee-Kirby collaboration, with Stan Lee writing the "teleplay" and Jack Kirby doing the storyboards. You can see hints of their better work, especially some of the jokey snippets of dialogue or the jaggedy Kirby lines on Doom's armour, but it's all submerged beneath a truly dire production.

This episode is a loose adaptation of Doctor Doom's first appearance in Fantastic Four #5, and begins quite promisingly in "the far off forbidden Kingdom of Latveria". The castle looks like a mix of science fiction and olde worlde magic, there a robots marching around, and inside we discover Doctor Doom glaring angrily at chess figure versions of The Fantastic Four. 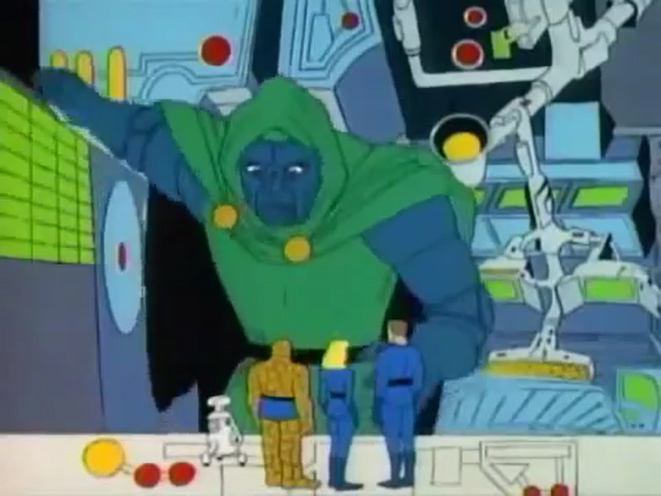 Doom himself talks with a heavily echoed deep voice, back to his usual performance style after the recent (much more fun) campery, and he looks very much like he does in the comics, with the only slight difference being that he appears to have a large row of metal teeth and a lower jaw that moves up and down as he speaks. 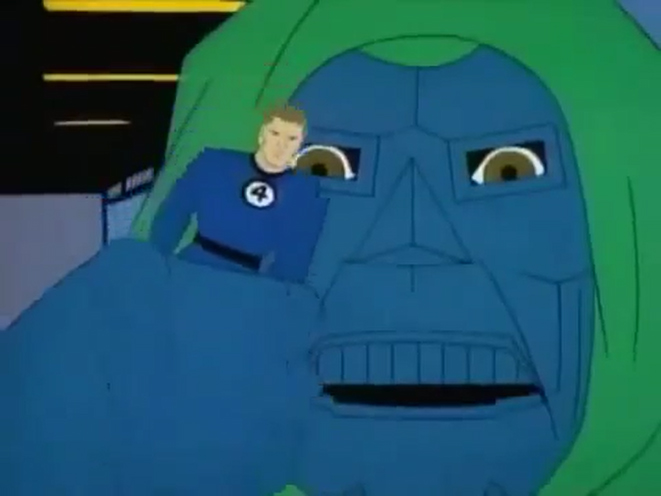 He sets off in his ship, heading for Manhattan where the action slides into the original story, right down to The Thing sitting reading a comic... except in this case he's reading a "Silver Surfer" comic rather than "The Hulk", I guess because someone else had the rights to the Hulk. There seems to be a tendency in a lot of these adaptations to keep stuff in that just doesn't work in the new medium - 16 years earlier it would have been fun to see a character in a comic reading a recently released comic starring another character, but here it's just someone in a cartoon doing so for no apparent reason.

Doom turns up and, as before, hovers above the Baxter Building. This time, however, it's a (much easier to animate) rope rather than a net that falls over everything, electrifying some (though not all) of the contents. 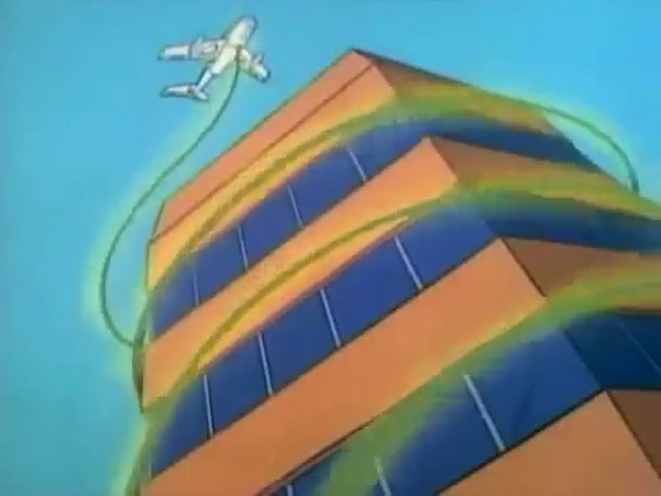 Doom appears as a hologram, much to the confusion of HERBIE who has no record of Doom in his "memory banks", so Reed Richards gives an extremely full version of his origin, including lots of details that weren't available in the original comic. The first part is much the same as usual, with Doom showing an unhealthy interest in ... sorcery! 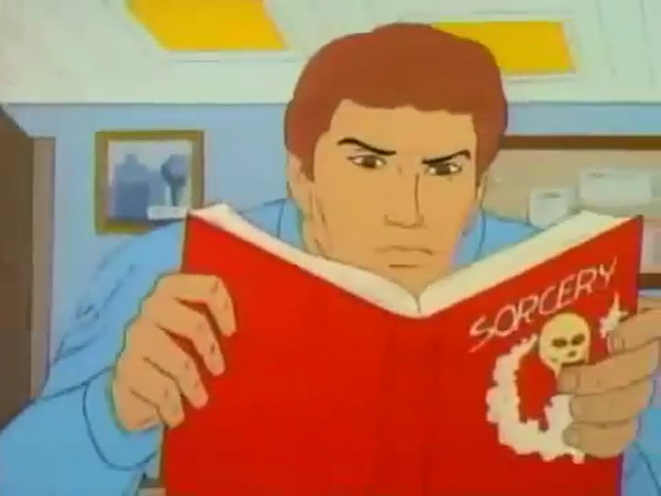 In this version he's doing some sort of chemistry experiment, but the end result is the same, and the heavily bandaged Doom gets expelled from college. 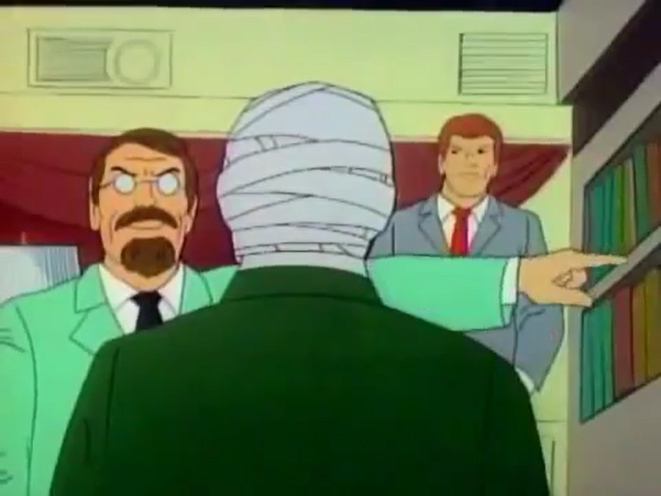 The college Dean here looks very Kirby-esque to me, reinforcing the sadness of this missed opportunity. Doom seeks the advice of specialists to cure his injuries, and then "forsakes the civilised world" to travel through remote villages dressed, for some reason, as a barefoot monk, using his horribly disfigured face to frighten off bandits. 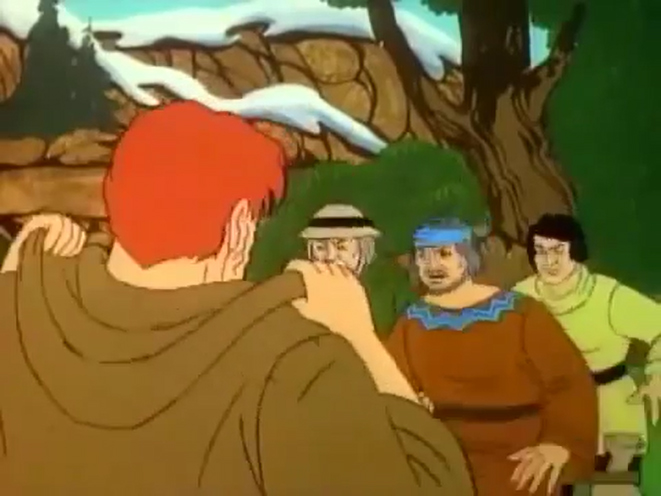 Eventually he finds some actual monks, makes his own armour, then heads back to Latveria to take it over. The whole thing is done very quickly and, again, makes me wonder why they bothered including things like the monastery, or indeed Latveria, if it's not going to play much part in the story.

"An admirable summation," says Doom, and then tells the FF it's time for them to return to Latveria with him. Understandably they say no, except Reed who wants to see what Doom is up to. Reed gets in the spaceship and then the others join him so he doesn't have to go alone, and they're soon in Latveria where a tractor beam and then some gigantic pincers bring their ship in to land. They're greeted by a great Jack Kirby robot. 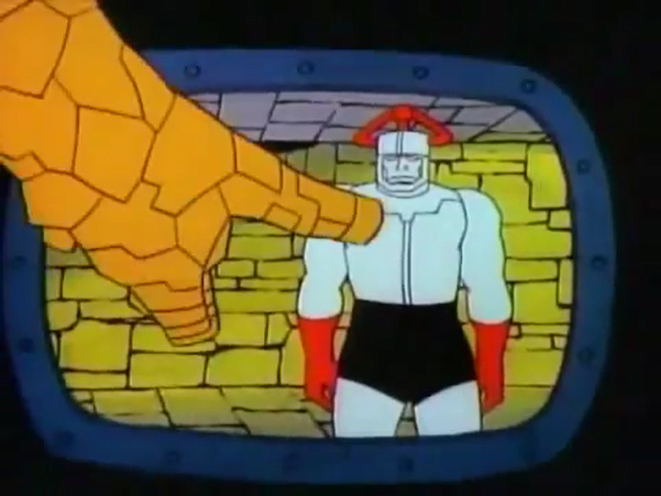 Doom tells them he needs money to buy "more arms, more magic potions, more giant robots" and, to be fair, who could disagree with that? He still wants the FF to go back in time to collect Blackbeard's treaure, but this time it's to sell it off rather than use it for magic. The whole thing is a much simplified, much blander, version of the original story and, with that in mind, on first viewing I thought it was rather odd that the composition was so different to the original. If they're copying the story so diligently, why didn't they copy any of the imagery? I was just thinking that, in fact, when this image appeared. 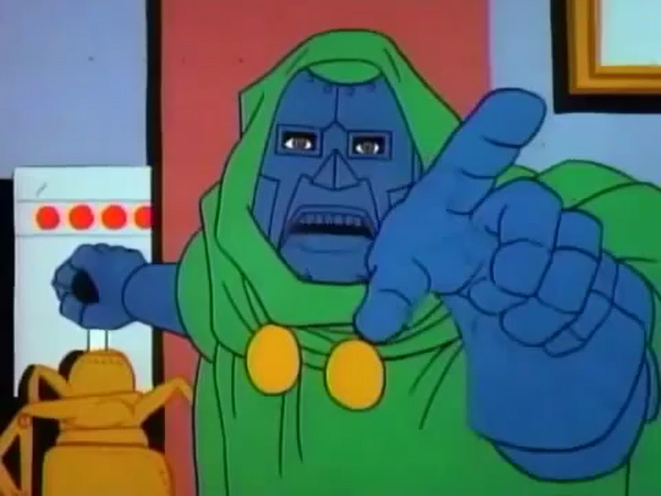 It's yet another direct swipe of John Buscema's image from Thor #183!! 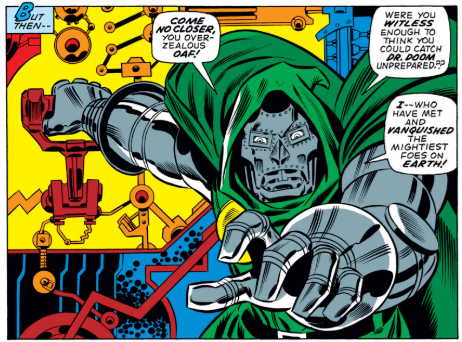 This strikes me as very odd - this image was definitely not part of the original story, yet here it is again, the only direct swipe I could pick out. I wonder why this above all else was chosen, especially in a Jack Kirby storyboarded cartoon?

Doom pulls the lever and Sue falls through a trapdoor, saying "I'm falling!" as she goes. "A trap door!" replies Reed. "He's captured me!" she responds. As stated previously, this really is a load of old rubbish!

As in the original, Sue's capture forces the rest of the team to go back in time to collect the treasure chest, despite Ben's wish that they "clobber" Doom instead. "Personally, I abhor acts of violence" replies Doom, taking another line of dialogue directly from the comic. There it was stated ironically, whereas here it seems to be true.

Reed tells the others that they needn't worry, he'll think of a plan to foil Doom... while standing right in front of him. Doom doesn't seem bothered about their planning and sends them back in time for a very sanitised version of the original story. There's a "comedy" section where Ben and HERBIE run away from some pirates while Reed steals their clothes, with "whacky" music playing all the time, but then they just agree to go with the pirates onto their ship rather than being drugged. Worst of all, when after a very brief not-quite-punch-up, when the pirates start calling the Thing "Blackbeard" it's just a mildly amusing occurrence, not the terrifically emotional chance for him to stay behind and be accepted as something other than a monster, as in the original comics. It's terrible!

They empty the box and we watch them very slowly head back to the island,load the chest with rocks, and walk back to their original spot. Slowly. Back in the future, Doom checks a clock and decides "they must have found the treasure by now" because apparently that's how time travel works, and uses a funky television screen to check. 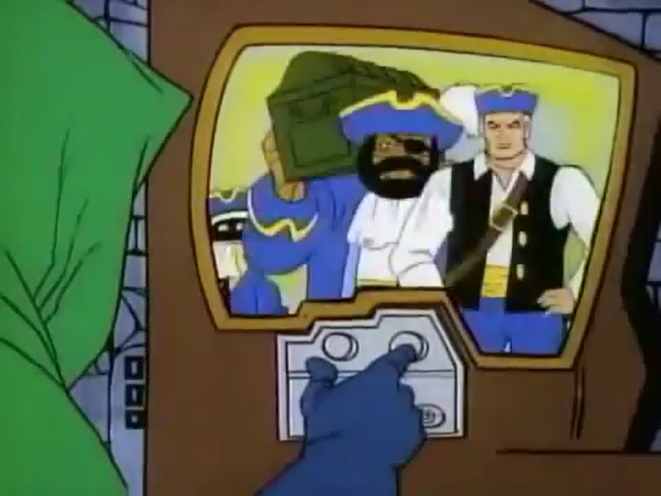 It would be unfair to point out how idiotic this is, because the comic itself did much the same thing, but at least the original comic was exciting, this is just dull! The FF somehow morph back into their costumes (presumably to cut down on the number of new figure drawings they'd need for the rest of the episode) and they're beamed back to our time, where Doom fulfills his promise by releasing Sue.

He is, however, distraught to see that Reed Richards has done the smart aleck tricking of bringing the chest as promised, without any treasure, so he points out that he promised Sue would be safe, but not the rest of them. A very slow, unexciting fight ensues which has lots and lots of time for chat, and then we cut back to Doom at another, very Kirby-esque, view screen. 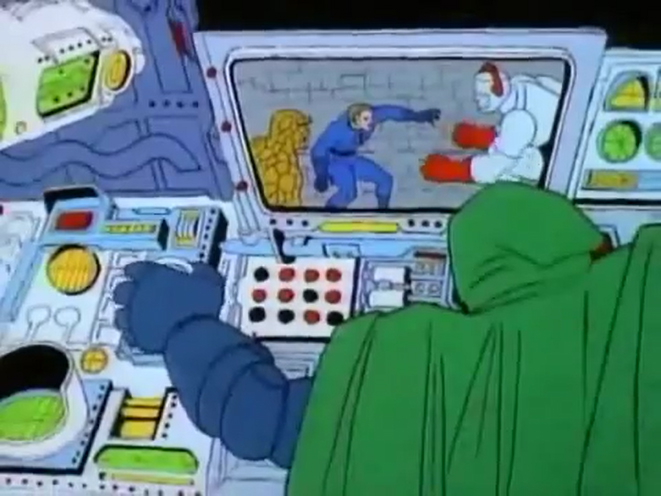 HERBIE and Ben had forgotten that Sue existed earlier, and now Doom does too. "The girl! She's vanished!" he says when he realises she's missing, apparently also forgetting she's called The Invisible Girl. Sue "short circuits the robot control" allowing the others to (very easily) break down a wall and discover a Doom who looks like he has been drawn by a ten year old. 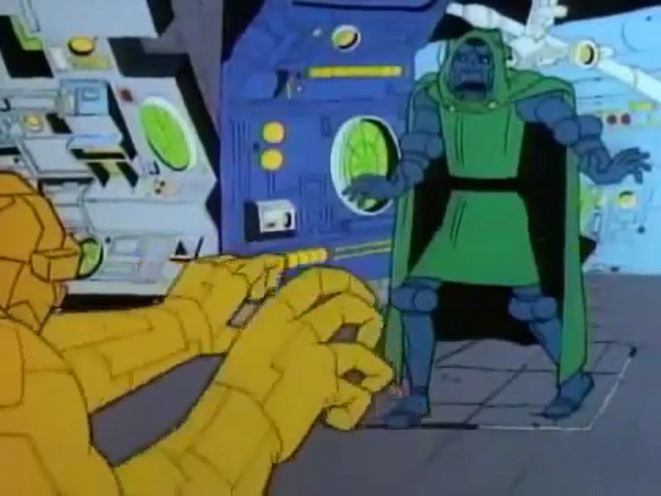 Doom pulls yet another lever and falls through a trapdoor. "It's over", says Reed. "He's the monarch here, if he chooses not to fight, so be it." It's not quite the same as the usual "He has diplomatic immunity" super-power, but it's close enough.

At the end Doom stands with a bunch of pilots, watching as they fly home. "They have earned their freedom," says Doom, "they won it fairly. But this was only the first round - there will be other encounters!"

Sadly, for me, he's telling the truth. They'll be another, equally awful, cartoon starring Doc Doom soon, but before that we'll be heading back at last to the Latveria of the mainstream Marvel universe. What a relief!