Here we go then, this is the grand finale for the recent (pretty exciting) story running through The Fantastic Four, starting where the last issue left off, with Doctor Doom cradling his son/clone in his arms, after strangling and electrocuting him to death.

This is peak Doom-of-this-period, screaming into the ether, demanding to know why he was "forced" to kill his clone. As we saw last time, he did it in a fit of pure rage, and this denial of his own responsibility is entirely in line with his current characterisation.

The FF attack, and Doom blasts them all with "energy" which Sue says is "even more powerful than my force field", trapping them while he goes to "take care" of his clone. Before he can do anything though, a lackey comes in to warn him that the Latveria people are gathering outside. Doom once again lashes out, before rushing off to see what's happening. 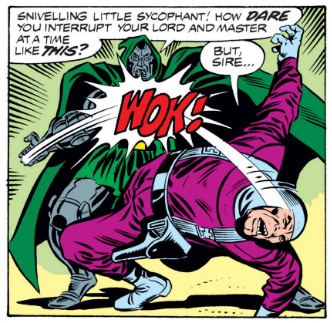 This time he doesn't bother so much with pretending to be quiet, bellowing "Everyone - Silence!" at the waiting crowd. Keith Pollard again draws our attention to Zorba's credentials as a man of the people, by showing him standing within the crowd, shouting up at Doom in his lofty perch. 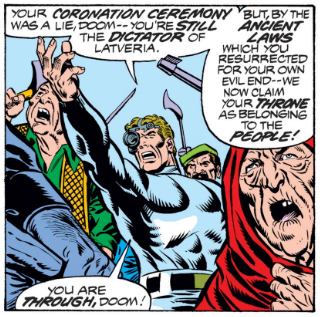 Doom can't be bothered with any of this, and unleashes an artificial whirlwind on the people, stating "you've brought your destructipon on yourselves" before stomping off to carry on with his plan. Here we get another insight into the inner life of Doom's goons, as one called Gustav does his master's bidding whilst in fear for the life of his family. 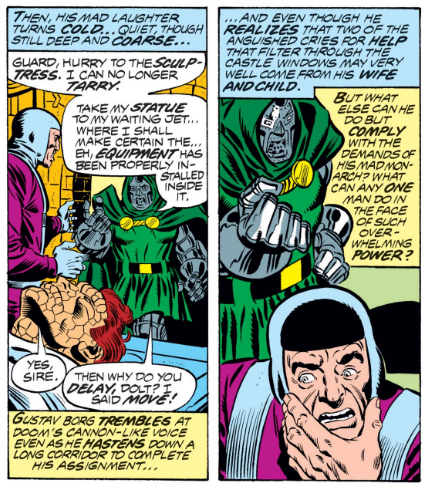 Marv Wolfman has been doing a lot of this during the course of this story, showing that the people of Latveria, even Doom's employees, are still people, seeking to find an explanation for how they can obey Doom in this way. It sets up the revolution as an inevitable consequence of his rule, and also comments on the people of Eastern Europe who, at the time the story was issued, were (according to the US Government) struggling under oppressive dictatorships themselves. It's a much more sympathetic way of looking at a people who, rather than being simple-minded peasants, are living in fear, dreaming of freedom.

Doom packs up the statue that Alicia has designed and heads off in a plane for the United Nations. The FF escape from their prison and give chase, much to the annoyance of Doom who, as usual, takes it out on his staff. 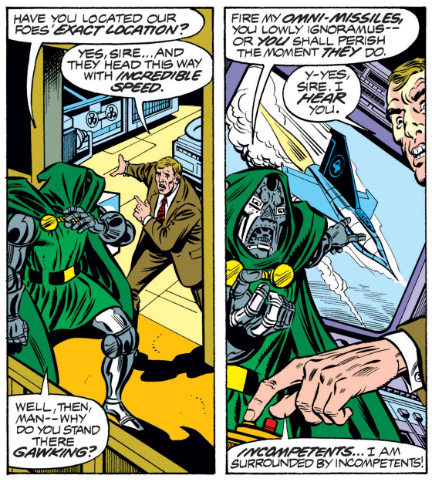 I keep saying it, but this is a long long way from the heroic revolutionary leader we saw back in the sixties! While the rest of the team deal with the Omni-missiles Reed Richards gives chase on his own, finding Doom in his "upstate New York laboratory", where he's treated to a recap of their history together. This follows all the usual beats of Doom's origin, neglecting the recent idea that he sought medical assistance before leaving the country, with the only change the idea that the monks in Tibet forged Doom's entire suit of armour, rather than just his mask. 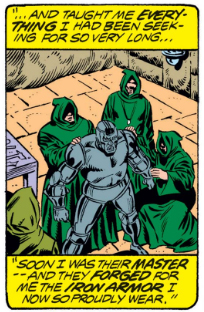 As advertised on the cover, a Big Fight then ensues between the two of them, which Doom very easily wins. While Reed lies on the floor Doom goes next door to observe his enemy from "my macabre murder room". As ever, he's watching via a screen. 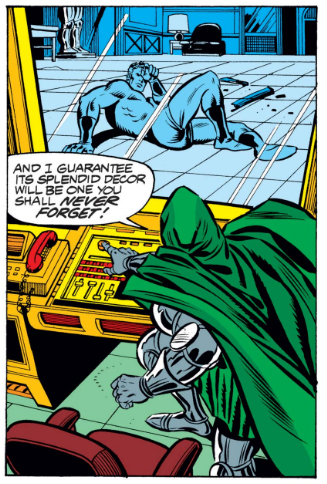 I do like the handy telephone in the console!

While Doom tortures Mr Fantastic, his robots are delivering the statue to the united Nations, where it's greeted by some very "of the time" racist caricatures. 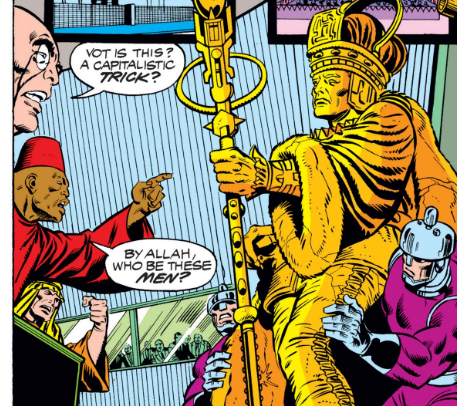 Doom receives a signal to say that the statue's in place and so leaves, trusting that his "automatic murder room" will be fine killing Reed Richards on its own. He's been a supervillain for nearly twenty years, and yet he appears to have learnt nothing! While Mr Fantastic (inevitably) escapes, Doom enters his "Solartron Complex - the energy storage center for all of Doom's incredible weapons" where, on yet another screen, he spots the rest of the FF fighting their way into the UN.

While he's distracted Mr Fantastic creeps up and, using a device mentioned a couple of issues ago, short circuits Doom's armour, leading to another Big Fight which, again, Doom wins pretty easily by using the "refrigeration controls" we've seen recently on the moon. 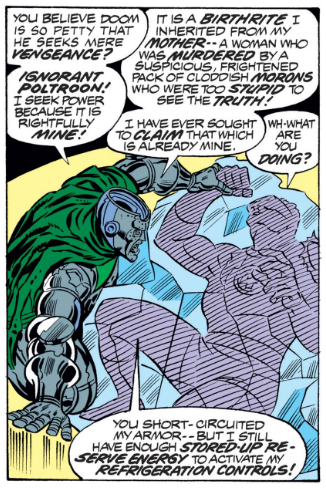 I'm not sure how these work when his armour is short-circuited, but I imagine it's the same way they managed to freeze water molecules when they were already at absolute zero!

The rant about his inheritance from his mother is very interesting - his mother didn't actually have any political power for him to receive, but the idea that he is somehow the rightful ruler of Latveria will return in a few stories' time. Here and now, however, he's busy with the next stage of his cunning plan, activating a hypnotic ray which takes control of the minds of the UN delegates. 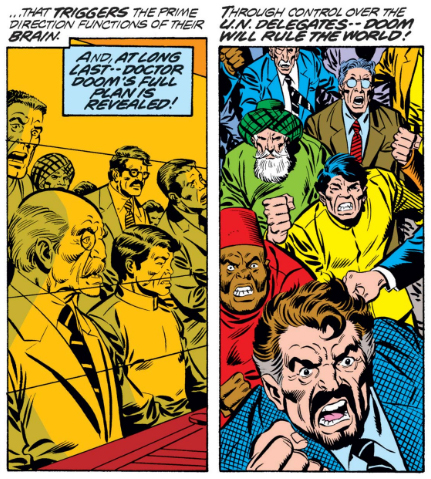 Once again, it seems that in the Marvel Universe the UN is more like a world government, and that if you can control the delegates you can control the world. This is clearly not true in our world, but it gets mentioned so often, across different media, that it must be true for Marvel's!

Everything's going great for Doom until Reed Richards picks himself up one last time. Getting up again when all else is lost is a common story point in Marvel comics, and normally you'd expect Reed's bravery and determination to triumph, but here Doom gets the upper hand yet again, strangling his enemy almost to death while demanding that he admits that Doom's disfigurement was his fault all along. 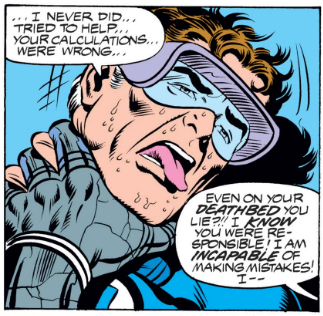 Just at the last moment Reed pulls off Doom's mask, without which he is unprotected from the "solar-powered intensified reflections" of the Solartron. Confronted by images of his own face he is driven MAD (or madder than usual, anyway), which Keith Pollard very cleverly manages to depict without actually showing Doom's face. 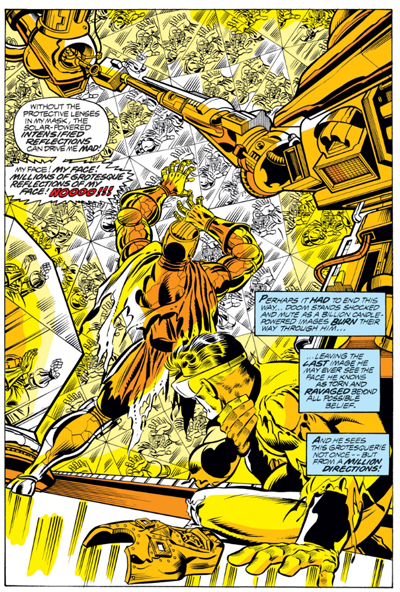 With Doom disabled Mr Fantastic is able to disable the hypno-ray, and we see a classic example of Marvel Age depictions of other (i.e. non-American) nations. 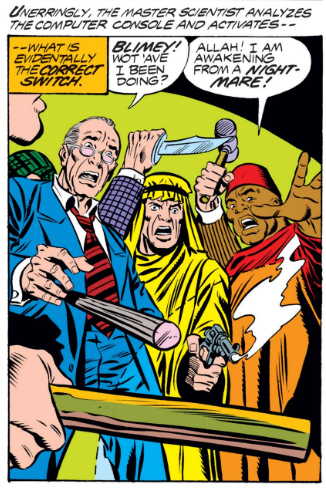 Blimey indeed! All the remains is an epilogue, featuring a particularly well constructed image showing exactly how the revolution has worked out.

Here we see the Fantastic Four (representing America) conferring legitimacy on the new head of government, standing on a raised area which places them above the mass of the people, who are now coloured as a group and silent. Tellingly, there's a UN guard there too, standing to one side, taking no part in proceedings. It's almost as if Marv Wolfman and Keith Pollard are suggesting that America is the only country strong enough to confer legitimacy on revolutions abroad!

Doom, meanwhile, is seen in a padded cell, writhing in "eternal torment" as a result of what he's seen. 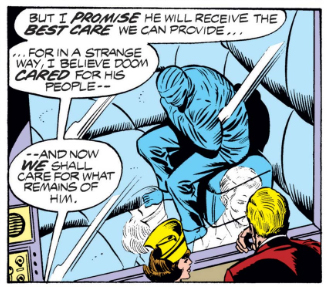 And there ends what has been, leaving my academic objectivity to one side for once (hem hem), a bloody brilliant storyline which has shown why this version of Doom is such a terrifying villain. After this it'll be an incredible two years before Doom properly returns to the mainstream Marvel Universe, although there'll be a lot of alternative realities, flashbacks, adverts and cartoon to look forward to along the way. Before that, however, we have an extra bonus look at part of this very issue where Doctor Doom attempts to sell... MILKDUDS!