What If Doctor Strange Were A Disciple Of Dormammu?

Minor Appearances Month continues with another trip to the alternate worls of "What If?", where Doctor Strange becomes a disciple of Dread Dormannu rather than The Ancient One. This change leads to Strange becoming even more arrogant, self-centered and, well, sleazy - at one point he is tricked into releasing a sorcerous called Umar from the Dark Dimension, and the look on his face when she thanks him is Quite A Thing. 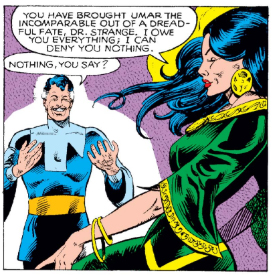 Meanwhile The Ancient One tries to find another disciple, and happens upon Doctor Doom who, at that moment, is bemoaning his disfigured face. 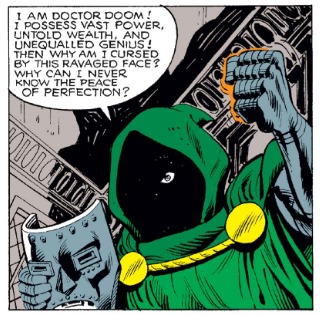 Bringing Doom into the story as a possible alternative is an interesting choice, as his and Strange's origins are pretty similar, with both suffering terrible injuries (Doom to his face, Strange to his hands), venturing to hidden monasteries in the mountains in search of a cure, and there learning forbidden secrets of sorcery. Actually, I say "pretty similar", what I mean is "the same"!

The Ancient One offers Doom a cure if he will become his disciple, but Doom is having none of it. 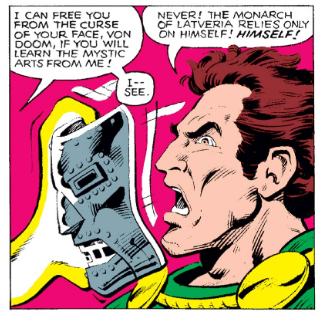 "I... see", says The Ancient One, quickly departing. Doctor Doom doesn't appear again after that, which I think is a bit of a shame. Instead The Ancient One is forced to turn to some other wizards, who fail to stop Doctor Strange. However, just as he is about to conquer the universe, he suddenly realises that Dormannu is a baddie and decides to be The Ancient One's disciple after all. It's all perfectly enjoyable, if a bit dull, with the Doctor Doom section being the best bit (although I guess I may be the only one who thinks that!), and it's worth noting that, as with yesterday's comic, Doom acts the same here as he would in the mainstream universe, preferring to remain disfigured rather than follow the orders of somebody else.

Next week, Minor Appearance Month heads somewhere we've never been before - into a puzzle book!