All I Ever Needed Was A Pencil

Today we have a fateful FIRST for "Marvel Age Doom" - a comic that I haven't read!

Most of the comics I've covered here appear on Marvel Unlimited, the online comics subscription service provided by Marvel themselves. They've got a massive, if not complete, library of comics and, for about 7 quid a month, it's pretty good value, even if the actual interface is a bit rubbish.

In cases where a comic isn't on Marvel Unlimited there are other ways to get hold of it. One is just to buy it on eBay, which I've done several times (these are not usually the expensive kind of old comics!), while another is to wait - most of the comics I bought a couple of years ago in preparation for this have subsequently turned up on Marvel Unlimited, which has been handy if ever so slightly annoying. Another easy way is to visit one of the many online comics scans sites, who have massive libraries including most of the comics Marvel haven't got round to uploading yet. Sometimes these even have the advert pages scanned, which can be very handy. Finally, at UAL we have our own Comics Collection, which isn't vast but has helped me out a couple of times.

This comic, however, wasn't available on any of them - indeed, I only found out about it when I saw it advertised in a different comic that I'd had to buy. We'll be covering that in Minor Appearances Month soon too!

The comic we're talking about today, "Fun And Games Magazine", was a short-lived series featuring puzzles and games loosely based around Marvel characters, put together by Owen McCarron. McCarron worked on a huge number of promotional comics, including the "Marvelous Fun And Games" strips that were briefly featured in various newspapers. I'm being vague here because these have proved very difficult to track down, as have the comics themselves. I've not been able to find scans anywhere, and individual issues are a bit too pricey for me - I don't mind buying one if I know it has Doom in it (like #6, which has him on the cover!), but I'm a bit reluctant to splash out just in case.

Luckily for me there are Nice People around in the comics community, including Jaz Jacobi of the Comic Book Historians Facebook group who very kindly went and checked through his run of issues to tell me which ones Doom appears in. He even scanned in an example page for me! 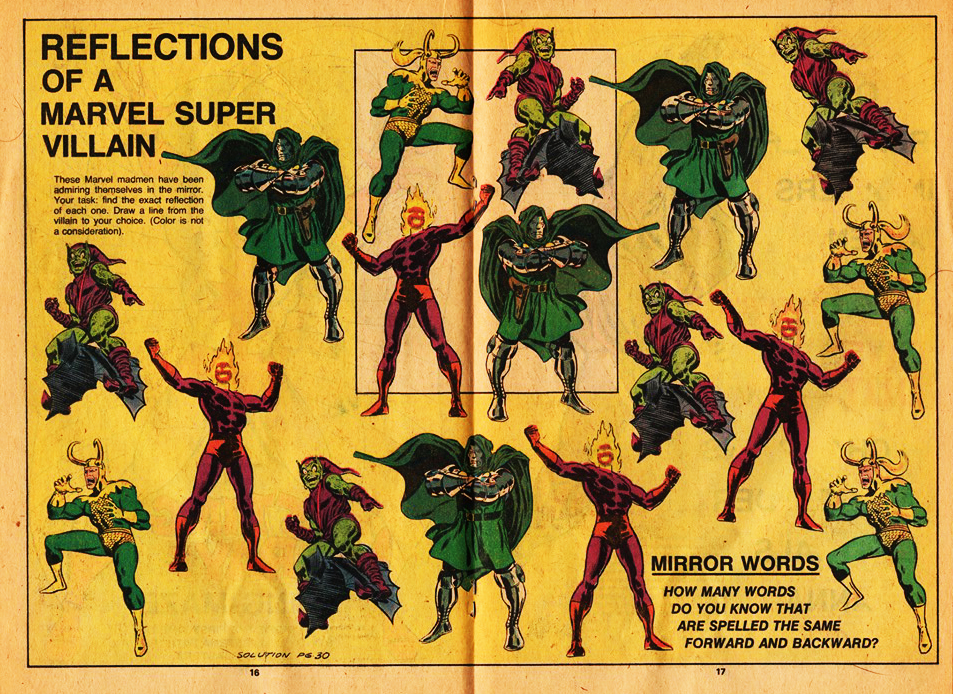 It turns out that Doctor Doom appears in most issues of the series, in puzzles similar to the one above. In theory I could now hit eBay and try to buy them, but as the PhD is meant to be looking at narrative appearances by Doom, I don't think I need to. Also, I don't think it'd be much fun for anyone to sit through EIGHT more blogs which would basically be "Can you help Doctor Doom find his way out of his castle maze?" or similar, so I'm just going to count this as covering all of them!

Next time we're returning (briefly) to the main Marvel Universe for an appearance so minor that it isn't really Doom at all!