Happiness Is A Warm Alien

When I saw this comic on the list of titles in the corpus I got a little bit excited as I was SURE that this would be the first comic in the list that I actually bought when it first came out. I distinctly remember the cover, and how gorgeous the art inside was, and also how much fun the story had been, with The Impossible Man constantly winding the Thing up as they attended the opening of one of Alicia's art shows. However, after a bit of thought I realised that I'd actually bought it a couple of years later in Marvel UK's reprint series "Rampage". 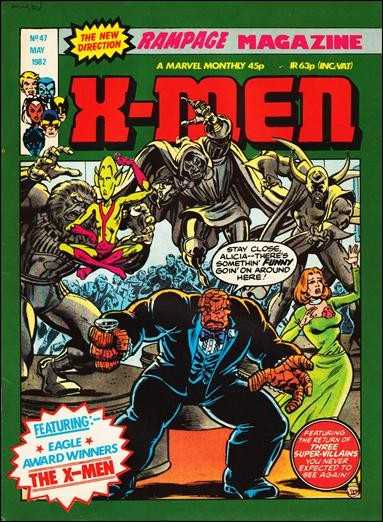 This was a brilliant comic which only appeared intermittently in Market Deeping, where I would buy my comics on a Saturday after going to see my grandparents with my Dad. As well as reprinting Two-In-One (drawn by Perez) it was also my introduction to the Claremont/Byrne run on The X-Men, reprinted in glorious black and white, the format I still prefer to read them in!

As I say, the story itself is an awful lot of fun, with guest appearances by the creators Mark Gruenwald and George Perez, along with editor Ralph Macchio, at the gallery party. 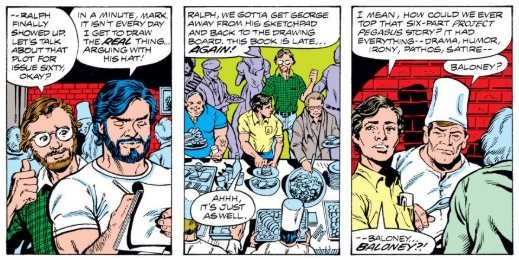 It turns out that the caterers for the party are The Terrible Trio, last seen by us way back in Strange Tales #122. They're a group of criminals who were recruited by Doctor Doom even further back, in Fantastic Four #23, and then unceremoniously dumped in another dimension, returning when Doom himself fell through a hole in the floor into space. Despite this long history with Doom he doesn't get mentioned by the trio, who are plotting their revenge on The Thing for putting them in prison afterwards. They do this by taking control of some statues which, they reason, The Thing won't be able to smash because they were created by his girlfriend. The statues are of various supervillains but, once Alicia realises what's going on, she tells The Thing that he's more important than they are, and he smashes them up. 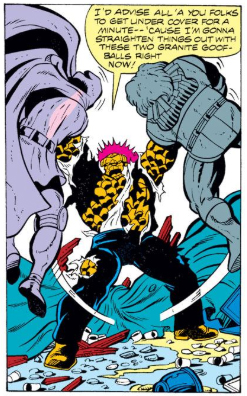 So, not really a Doctor Doom appearance at all, even though someone, somewhere, decided it was Doom-y enough to be listed in a database and so find its way into my corpus. It is, however, a real deep dive into the darkest corners of Marvel's continuity, something which Mark Gruenwald would become well know for.

Next time we've got a bit more Doom as we return to the world of Spidey Super Stories for "The Sunshine Machine"!