Come on in... the Revolution's Fine!

Here's an extra special flashback edition of Minor Appearances Month, looking at a very minor appearance from 1970, where Doctor Doom - or, rather, a Doctor Doom costume - appeared in the first Rutland Halloween Parade comics crossover.

These crossovers occurred occasionally throughout the 1970s (and even more occasionally beyond then) as an unofficial link between Marvel and DC's universes, notably in 1972 when a story involving Steve Englehart driving to meet Gerry Conway and Len Wein began in the background of Amazing Adventures #16 (written by Englehart), continued into Justice League of America #103 (written by Wein) and concluded back in the Marvel universe with the Gerry Conway-written Thor #207. It's a lovely bit of fun brought about by the enthusiasm of this generation of comics creators, recently arrived from the world of fandom.

This story does not, sadly, feature any actual superhero crossovers - the parade's organiser Tom Fagan traditionally wore a Batman costume but even this could not be shown in the Marvel-published stories, so he's shown dressed as Nighthawk - but it does feature plenty of comics creators in cameos, including Roy and Jeanie Thomas, who look very excited to be there. 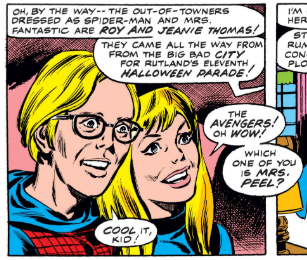 Doom appears a few times, although he's quickly revealed to be just someone in a halloween costume. There's a brief moment when he first appears when it might just be him though, if only due to the dialogue. 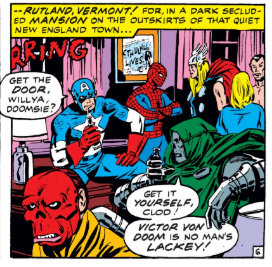 It's a great gag, only slightly given away by the fact that the Red Skull is clearly some bloke in a mask! Doom takes his own mask off in the following page, and then makes his final appearance on the page after that, actually leading the parade. 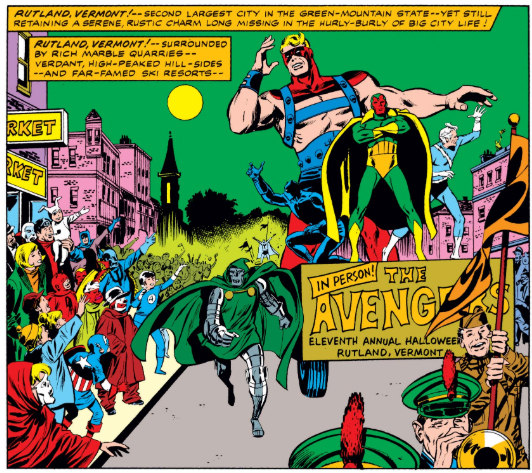 Is it me, or is there a cheeky Batman in that crowd? The rest of the story is... let's say "very of its time", as The Valkyrie organises a bunch of female Avengers into a group called "The Liberators" in order to fight the "male chauvinist pigs" in the rest of the team. She turns out to be The Enchantress in disguise, and the less said about the sexual politics of the whole thing the better! 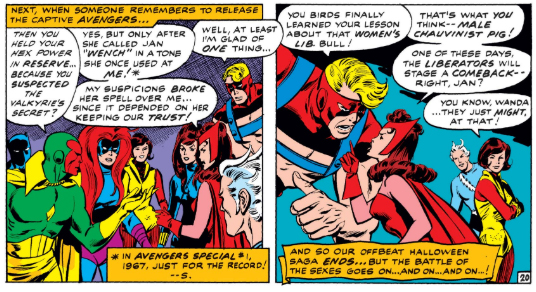 Unfortunately I only found out about this story by chance, when I noticed Doom in a feature about the Halloween parade - it would have been good to talk about it in its rightful place between Thor #182 and the DERANGED Astonishing Tales #3, as this was right at the start of Doom's first real period of glory. It would also have been good to have been able to relate it to Daredevil #9, another appearance of a Doom costume and, coincidentally, another issue that I missed at the time! 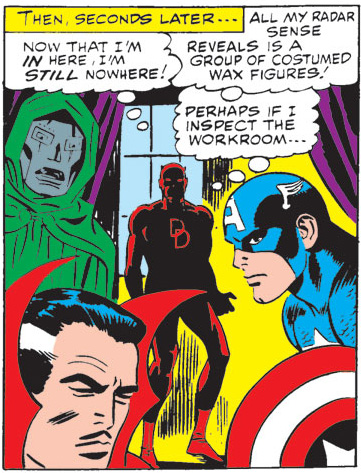 Having said that, it does fit in quite nicely with the next episode of Minor Appearances Month, which will be another flashback, looking at some real-world Doom costumes!