The Power Of The People!

Welcome back to a new year of the Marvel Age Doom blog, which kicks off in style with the return of Doctor Doom to the mainstream Marvel universe.

As we saw back in November, Doctor Doom was completely incapacitated at the climax of Fantastic Four #200 and did not take part in the Marvel universe proper for two whole years. The whole of "Minor Appearances Month" detailed his various appearances in flashbacks, adverts, "What If?" and other publications, but he was otherwise entirely absent from the main "story" of Marvel from 1978 to 1980. Looking at it now it's quite a feat of editorial policy, and suggests that there was a determination within the company to rest the character before very gradually bringing him back in a series of stories that would see him returned to his status as Marvel's top villain. It's a process that companies have done a lot more in recent years, notably with Marvel's recent temporary retirements of Thor and The Fantastic Four, but this is the first time I recall seeing it happen during the Marvel Age.

Doom's return begins, quite appropriately, in a Fantastic Four Annual - the same place that his full origin was first told sixteen years earlier. "The Power Of The People!" is a back-up story set in Latveria, where the absence of Doctor Doom has not gone quite as smoothly as one might have hoped. Rather than ushering in a new age of peace for the East European country, his removal from power has seen the nation begin to collapse without its former iron ruler in charge.

Even all these years later, it's quite astounding to see the usual "fairy tale" of a dictator overthrown being turned inside out in this way, and it's possible to see Doug Moench using Latveria to comment on then-current events across the world, where dictators such as the Shah Of Iran were overthrown, only for the newly free nations to fall into chaos and revolution. It's the start of a character voyage for Doom and Latveria that will come to a head with John Byrne casting Doom as an almost benevolent tyrant, whose previously-deemed "villainous" policies are actually for the good of the people.

For now, the problem seems to be that Zorba, the revolutionary installed in charge at the end of Fantastic Four #200, is too weak to control the simple-minded people of Latveria, who object mightily to the taxes necessary for their freedom to be established. Seen through a cynical eye this is a pretty mean-spirited view of ordinary people in the rest of the world outside of America, who do not have the backbone needed to nurtuer a revolution. Americans, of course, were pure of heart and savoured freedom above all else, but the suggestion here seems to be that other nations tend to get upset if they don't get their creature comforts.

Zorba's advisor, Starn, tells him not to worry, and together they go down to the basement where Doom is being guarded by Hauptmann, the scientist who worked for the old regime despite the fact that Doom murdered his brother. They look in to see Doom sitting still... "Too Still?" asks Zorba, and when they check it turns out that the figure in the holding cell is in fact (see if you can guess!)... a robot! 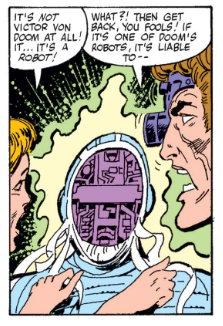 Starn suggests infiltrating the Doom Loyalist resistance to see what's happened, but Zorba refuses - that is how Doom used to do things, not how he does them now! 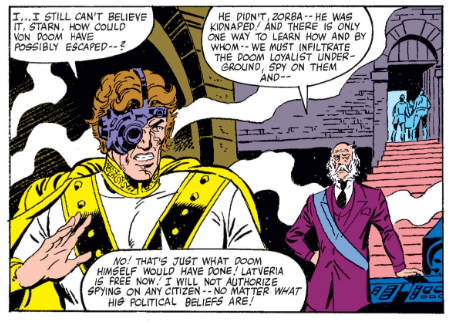 It seems that the rescue of Doom's body only happened very recently, as the scene cuts to a cavern where Doom's body is being delivered to the Loyalist's base, which is under the command of our old friend Boris. 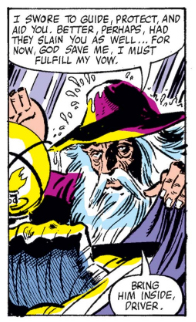 They're very soon joined by none other than Hauptmann, who explains why he's come to help, despite his family history with Doom. "The fear is stronger than the hate!" 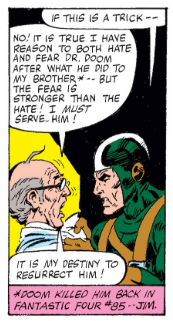 Again, this is a pretty cynical view of oppressed peoples, practically willing themselves into oppression at the hands of "strong leaders". To be fair to Doug Moench, this was a common view in the US at the time, and arguably informed much US foreign policy, but with historical hindsight it's still a bit alarming to see.

Meanwhile, Zorba is woken up by a nightmare about his treatment at the hands of Doom - as previously established, his cybernetic eye is a result of human experimentation in Doom's lab. He leaps out of bed to go and check that, even though Doom's body has gone, his armour is still where it should be, and arrives just in time to bump into the loyalists who have come to take it back. 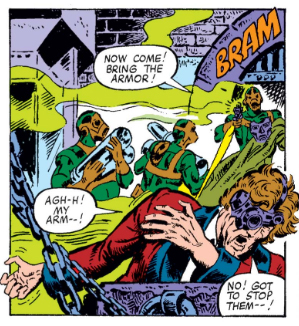 This is a big turning point for Zorba. He's already been reminded of his own mistreatment at Doom's hands and is then gassed by his enemy's lackeys, all because he refused Starn's advice to infiltrate them in secret. It's all too much, and he changes his mind, choosing instead to play the game Starn's way, and advises him to use one of the Loyalists to track down Doom's base. 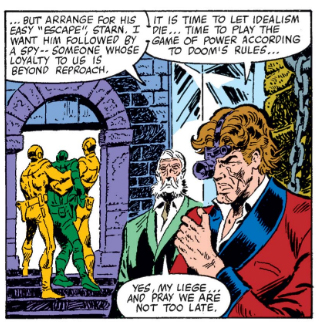 "It is time to let idealism die," he says.

Back in the Loyalists' base, Doom is placed in his armour and then strapped to a table where he is going to be zapped with a "generator". The comparisons to Frankenstein are not shied away from... 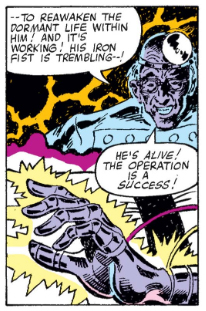 Doom comes back to life, shouting "Where am I? What has been done to me?" There's only time for a quick explanation before one of his guards realises that Strego (the name of the guard who was set up to be followed earlier) has somehow escaped, and Doom swings into action right away by simply murdering him. 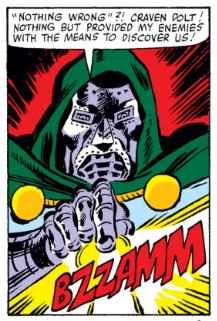 Zorba's forces are already there, but Doom destroys them easily, partly because they're trying to use his own weapons against him (something which many have tried before) and partly because, well, he's Doctor Doom. Zorba and Starn are forced to flee, leaving Doom's loyalists to start hailing him again. 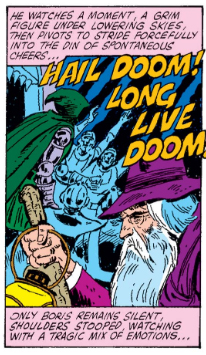 Doom orders his men to find a new headquarters and tell the people that he's coming back, before strapping on a device which looks rather reminiscent of the one he used to steal the Silver Surfer's power and then flying off to begin his planning.

This leaves Boris to watch his master depart with a mixture of emotions - he's done his duty, but he seems to be aware that his boss is not entirely a Good Thing.

This has been a fascinating comic in many ways, playing with our sympathies throughout, never allowing us to entirely get behind any one character, and putting Doom in a place where he can begin to make his comeback. As I always say, it's a mark of Doom's importance in the Marvel Universe that he gets this sort of treatment and, as we'll see next time, his return is deemed a big enough deal to spread out into other titles as well - this was, after all, only "Chapter 1"!