The Jewels Of Doom!

Doctor Doom's return to the Marvel Universe gets back on track in a rather unexpected place today - the third issue of "Dazzler"!

This was a comic originally intended to be a genuine transmedia event, linking to an animated TV special and a real singer called "The Disco Queen", who at one point was going to be Bo Derek. None of this ever actually happened, apart from the comic, which was repurposed to be part of the Marvel Universe. That means that, in the early pages of the comic, she goes through some of the generally accepted jobs of a new Marvel character in their third issue, notably meeting other members of the Marvel Universe (in this case the Fantastic Four) to establish her presence there, and then facing mundane issues in her private life - in this case money troubles in her job. 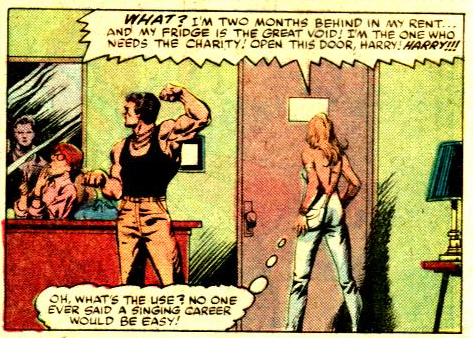 Dazzler is visiting the Baxter Building when Johnny Storm spots a news article about an exhibition of Doctor Doom's jeweles, which is being staged at the United Nations. This gives a handy excuse for a quick recap of recent goings-on in Latveria. 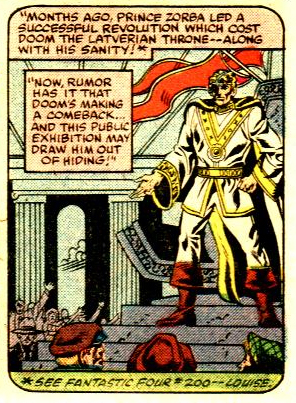 We then pop over to the aforementioned United Nations - a place which figures almost as much in Doom stories as Latveria or Manhattan - where the Latverian ambassador fills in a little more background about his country's current situation. 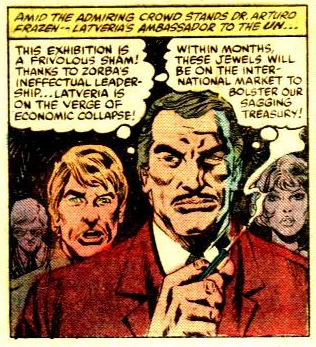 It's interesting how quickly Latveria has gone from a place of hope, as seen in Fantastic Four #200, to the strife-torn country shown in Fantastic Four Annual #14. Aside from the slightly dodgy continuity seen recently in Amazing Spider-Man Annual #14, this feels like a concerted attempt to move the story of Doom and Latveria gently forward through the background of the Marvel Universe.

We then briefly follow Dazzler as she accepts a charity gig at the UN and pays a visit to her father before returning to "a castle in the Bavarian alps" that is a clear swipe of the one we saw in Amazing Spider-Man Annual #14. 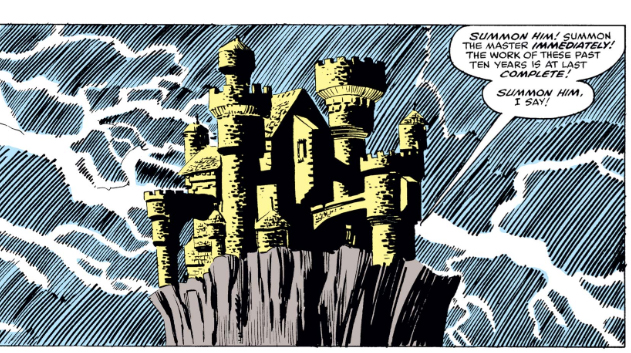 A hooded lackey, also seen in that annual, tells Doom that his jewels are being exhibited at the UN. At first Doom dismisses this, calling Zorba "an unthinking boor" but as soon as he hears that The Merlin Stone is among the exhibits he sets off immediately to get it back.

He's not the only one after the jewels, however, as a gang of robbers wait outside the UN to try their hand at stealing it.

I wonder if Tom deFalco or John Romita Jr have ever actually seen "punk rockers"? Dazzler disturbs them and, powered by the sounds of her pocket radio, stops them in their tracks. However, while all that is going on somebody else makes their move, and when Dazzler pops back to check that everything's OK she discovers that it's ... 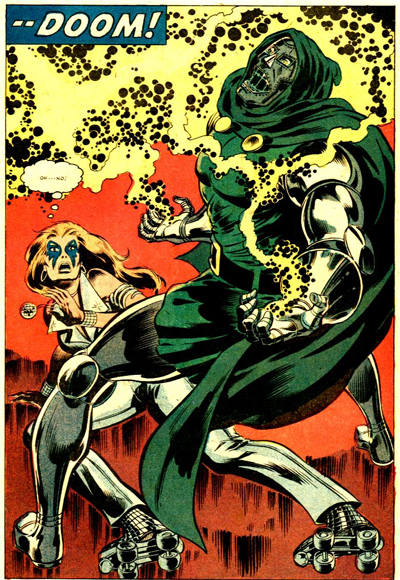 I can't help thinking that this was meant to be the last page of the issue - there's even a boring space in the bottom right where a "NEXT TIME!" box could go - and I wonder if the length of the issue was extended at a later date?

Doom acts the gentleman, helping Dazzler up, telling her "Do not fear! Doom does not make war on helpless civilians!" which is not something which has been borne out by his actions over the years. Still, Dazzler is impressed. 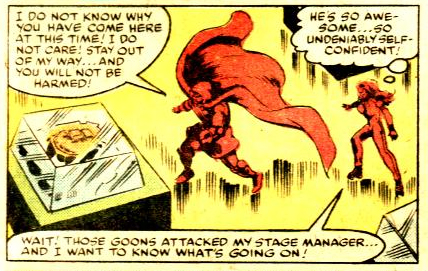 The feeling is mutual, with Doom impressed by the "noble, courageous spirit" which he senses under her impertinence (according to him anyway), so decideds to give her more backstory, including a brief discussion of his first encounter with the FF way back in Fantastic Four #5 when he sent them back in time to get blackbeard's treasure chest. It turns out that he didn't just give up when Reed Richards conned him, but instead continued looking and eventually found the Merlin Stone. Not only that, but this stone will allow him to find another one in another dimension.

Dazzler decides that she can't let him get that much power, and a Big Fight breaks out during which she nearly beats Doom, until he manages to electrocute the floor and knock her out. 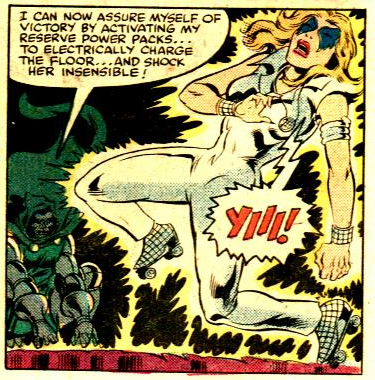 The story ends with Doom picking up the Merlin Stone and then Dazzler too, taking her away on his hoverbike so that she can be sent off in search of the second stone. It looks like it's going to be a retread of Doom's very first appearance, using superheroes to do his dirty work for him, but we'll have to wait a little while to find out how it turns out because next time we'll be looking at another appearance that would prove to be highly contentious!