Doom has been absent from the mainstream Marvel universe for over two years, but now he's back, appearing on the cover of not one but two comics in the same month, in both cases hassling female superhero covers - last time we looked at him kidnapping an unconscious Dazzler, while today we have him doing much the same to Storm!

The actual story begins at the ballet, where Storm is trying to get to know Kitty Pryde's ballet teacher, Stevie. However, before they can get properly into a discussion about The Dance, they're attacked by Miss Locke, a lackey of Arcade who wants the X-Men to help her rescue her boss from the clutches of Doctor Doom.

The editor, Louise Jones, misses off the issue number for the reference she's making here, and that's perhaps not too surprising as neither Arcade nor Doctor appear in the story that's being referenced! It's actually Marvel Two-In-One #68, published about nine months ago, in which Angel and The Thing get trapped in a castle full of robots controlled by the Toad. It turns out that the castle is actuallly Doctor Doom's old New York castle, as seen in Fantastic Four #5 and occasionally since, and that Toad is funded by a mysterious "Mr A". The story ends with Angel taking over and paying for the castle's transformation into an amusement park called "Toadland". 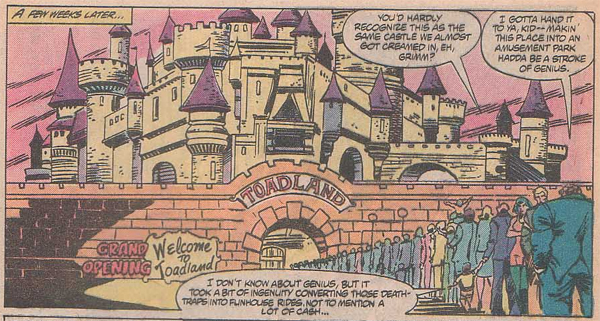 I hope they remembered to take out the Time Machine before opening day!

Doom and Arcade, as I say, don't appear, so it's a bit of a stretch for Claremont to use this as a way into a Doom/Arcade story. Anyway. Storm flies back to the X-Men to discover that they've also had friends or family members kidnapped. The team decide to get some more information about Doctor Doom, who they appear to know nothing about. It's a bit of a surprise to realise that Doom and the X-Men have never met before (except briefly in Fantastic Four Annual #3 aka The Marriage Of Reed and Sue), with only Nightcrawler claiming to have even heard of him.

Central Europe is, of course, a small place, so word gets around!

Professor X calls in some extra help from some previous team members via astral projection, then they head off to update New York to visit Doom's old castle, which now looks a lot more like the one recently seen "in the Bavarian Alps" than the amusement park. 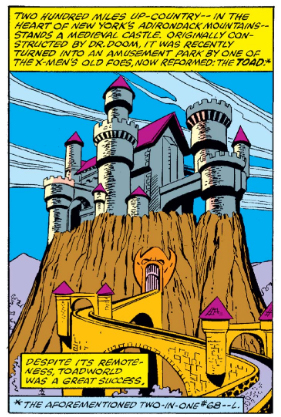 Storm drops into the castle where she is met by Doom, who offers to discuss the matter with her over some food. Right away this is the honourable, slightly suave version of Doom rather than the laughing lunatic, and while the rest of the X-Men jump into battle with his battle-suited guards he and Ororo enjoy a slap-up feed, attended to by the cloaked lackeys that he's been employing recently.

The meal goes really well, almost becoming one of those really good episodes of "Blind Date" in the Guardian Magazine. 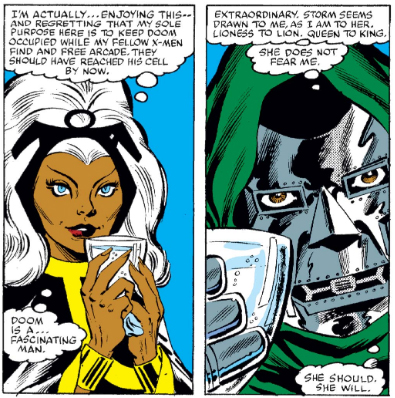 Doom is, of course, simultaneously monitoring the battle with the other X-Men and so knows that they're getting close to him. He thus decides to reveal that Arcade isn't a prisoner at all, and that this whole business has been a sneaky trap to get the X-Men there.

Doom uses a new device on Storm which coats her entire body in chrome and, when the X-Men burst in to fight him, uses it on them too. Colossus, of course, already has a body coated in chrome so this doesn't work on him, but Doom just zaps him with a "neural disruptor" anyway. 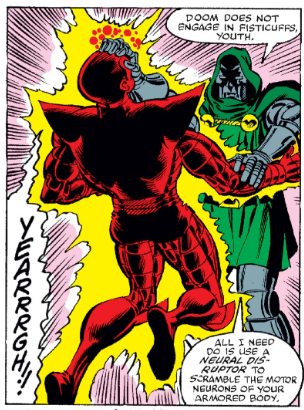 And that's the end of the comic - how will the X-Men escape? What does Doom want them for? And what's Arcade got to do with it all? We'll have to wait a while to find out, because next time we're looking at... bubble gum!