John Byrne began his acclaimed (especially by me) run on Fantastic Four a month after this comic was published, although it'll take us a while to get to it as he waited quite some time before he brought in Doctor Doom. However, when he did introduce his version of the character one of his first points of business was to retcon today's story so that the Doom seen here was actually a Doombot. Apparently he didn't like the way Chris Claremont portrayed Doom... or indeed, at this point, Chris Claremont! 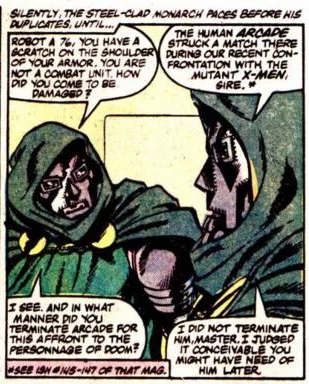 It may seem that this is all a bit petty, but having re-read the comic in question I can see that Byrne does have a bit of a point. There's something distinctly wonky about Claremont's characterisation of Doom, notably the way he uses contractions in his speech, the oddly passive way that he behaves around Arcade, and some rather out of place self-awareness.

In the actual story, Doom has captured the X-Men and trapped them in a version of Arcade's Murderworld, where each of them has been given a deadly puzzle to escape from. For instance, Nightcrawler is placed inside a room with no windows, so he has no way of knowing where he'll reappear if he tries to teleport out. As with all stories involving Arcade, it all seems a bit pointless to me. What does Doom gain by putting his enemies inside a logic puzzle? Isn't there the risk they'll escape and defeat him? And what does he have against the X-Men anyway, as they've never really met before?

He's also very quickly developed an obsession with Storm. In the last issue we saw how he'd transferred her into "organic chrome" much like Colossus's armoured form, so "she will live - and remain beautiful - forever", while constructing a Storm robot to be his servant. 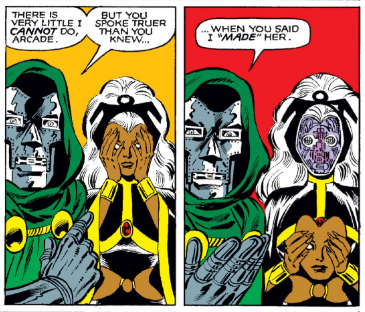 This actually makes a tiny bit more sense if this Doom really is a robot - maybe he's made himself a lady robot to be his girlfriend? Is that the sort of thing robots do?

Storm may be trapped inside her new chrome body, but she's still vaguely conscious and feeling claustrophobic, which comes out as terrible weather conditions all over the world, including outside the castle itself. Once again, the castle seems to have been very directly copied from the Frank Miller version a while back. 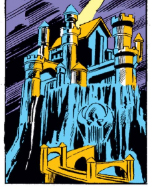 A team of substitute X-Men arrive and battle their way through Murderworld which, as ever in these stories, appears to be enoromous and partly magical, with room for battling spaceships and fairground horses which somehow come to life. The whole rest of the comic is taken up with Havok, Banshee, Polaris and Iceman fighting their way through hallucinatory scenarios, as the weather gets worse and worse, influenced by Storm. By the final page Doom is gazing out of the window wondering what's going on, but then is disturbed by Arcade, looking for a light. 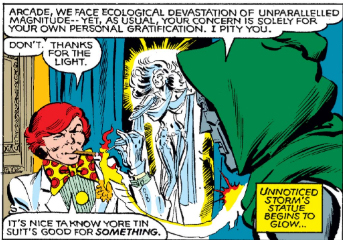 Doom responds to his armour being used as a lighter and his cigars being stolen (although I don't think we've seen him smoke a cigar before - how would they fit through his faceplate?) by saying "Arcade, if you wish to tell me something, please do so". This seems slightly bizarre for a character usually happy to murder people just for bringing him bad news. I think I'm starting to agree with John Byrne?

The story closes with Arcade pointing out that Nightcrawler appears to have solved his puzzle and teleported out, but we'll have to wait a while to find out where he went, as we've got a couple of trips to other storyworlds to come, starting off next week with Doom meeting ... SUperman?