This comic is simultaneously very straightforward, in that two superheroes get together to fight a common foe, but also very odd as the superheroes come from two entirely different storyworlds, yet never mentioned the fact. Through it all, however, Doctor Doom remains resolutely Doctor Doom!

The story is a "spiritual sequel" to the huge-selling "Superman vs Spider-man" of 1976, and like that takes place in a world very similar to both the DC and Marvel universes, except that both appear to have always co-existed. It means we get a scenes such as the one where J Jonah Jameson orders Peter Parker to go and get pictures of Superman as if that's something he says all the time.

It starts off like a normal Spider-man story, with Spidey stopping some bank robbers while being observed (from a distance) by Doctor Doom, who is busy with another plot for world domination. 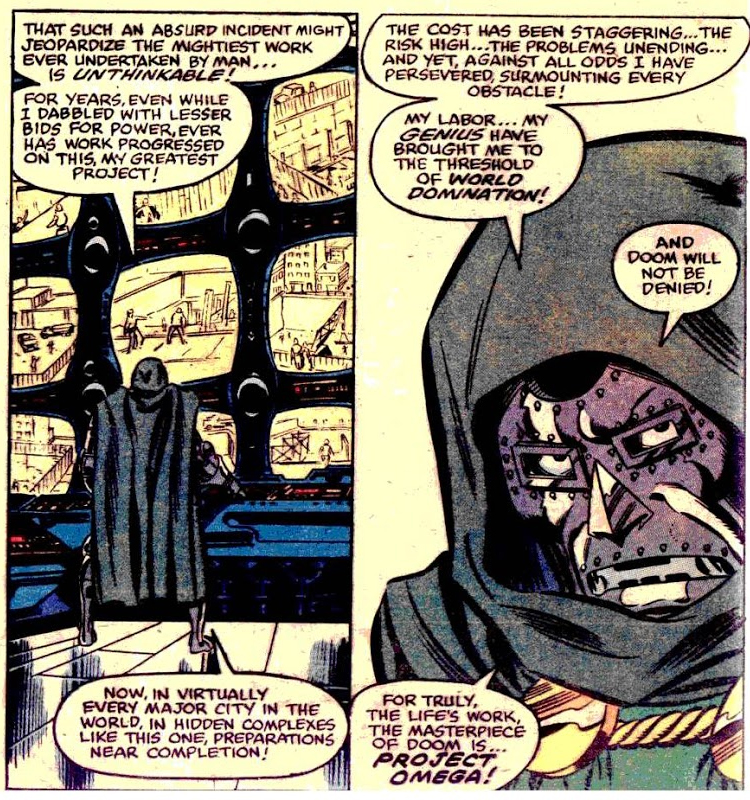 This is very much the Doom we know, so much so that Jim Shooter even gives him a moment of tortured contemplation in front of a mirror.

Doom then goes to one his trademark video screens, where he sees the Hulk being guided towards Metropolis. One of the Daily Planet's reporters is also keeping an eye on his progress, while stuck in a meeting. 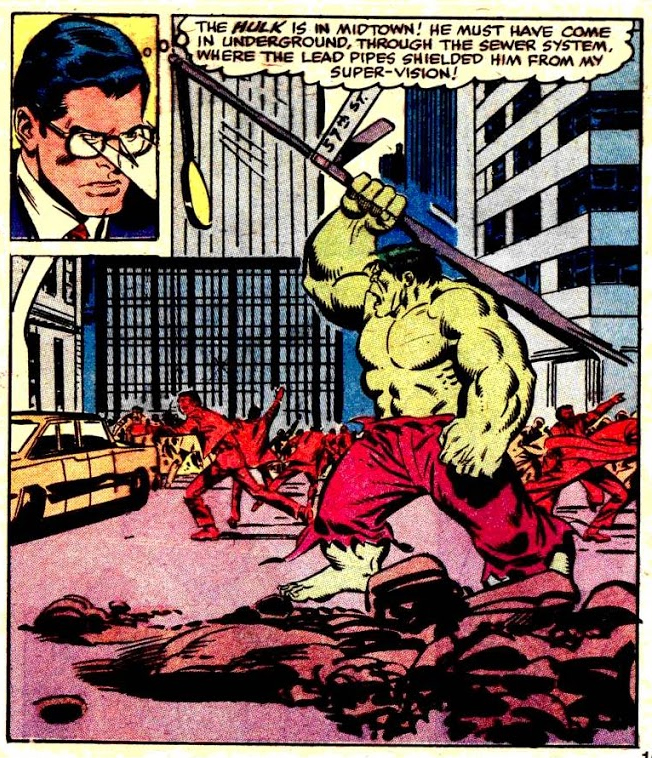 Superman flies out to fight the Hulk in a scene which, for a long-time superhero fan, is immensely jarring. The Hulk behaves just like the Hulk, Superman is Superman, but the whole thing feels entirely wrong - these two should not be meeting, and even if they are, surely it shouldn't seem so everyday? Then, to make it even worse, Spider-man arrives to help too! 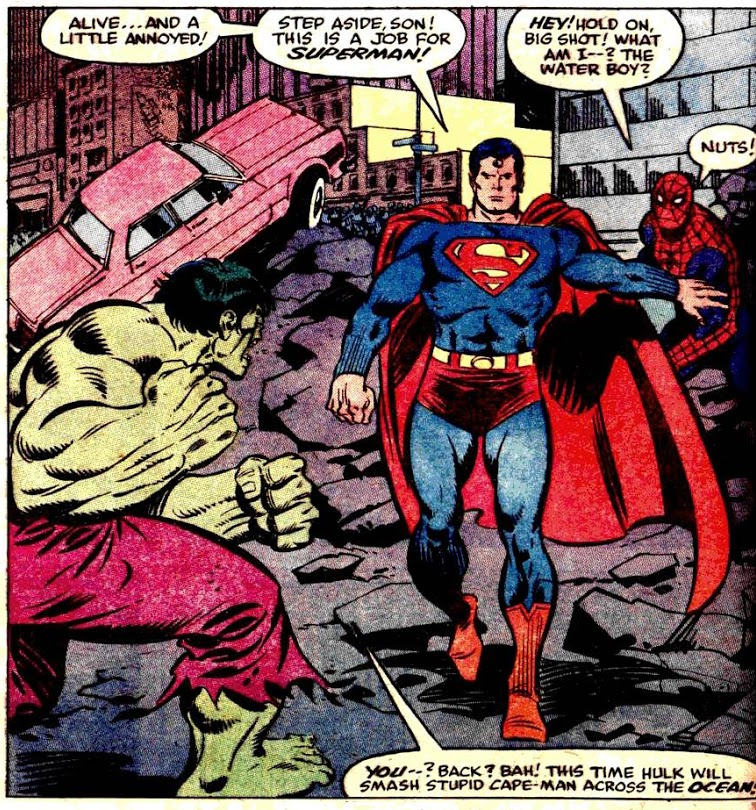 My brain hurts! It turns out that Doctor Doom sent the Hulk to Metropolis to free The Parasite, accidentally breaking him out of an underground prison as part of his rampage. Meanwhile Peter Parker meets some of the staff from Galaxycom, where he sees someone he knows - Lois Lane! 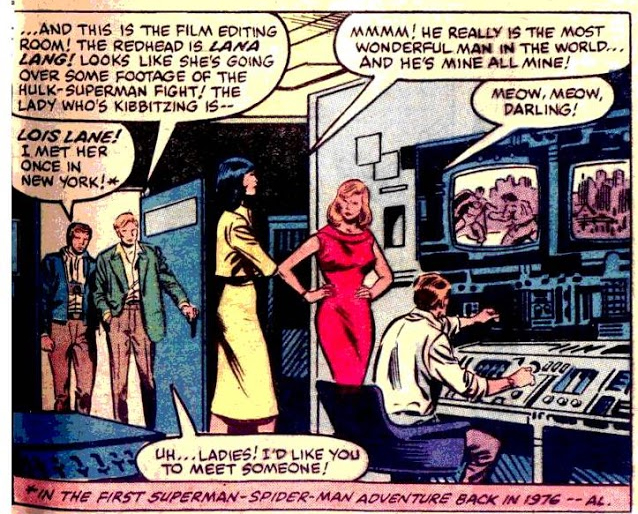 This is one of the very few nods to the previous story from five years ago. Meanwhile Superman has worked out that, with Lex Luthor locked up, only one man can be behind the Hulk's rampage, and so flies over to New York to visit the Latverian embassy, where he confronts Doctor Doom. 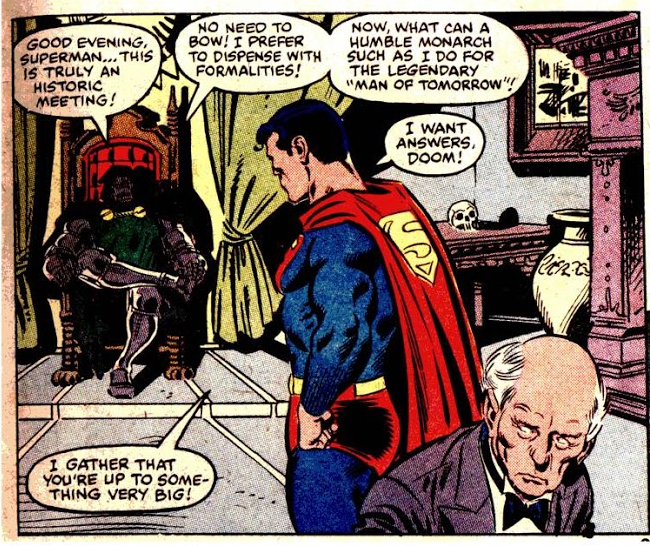 Doom's behaviour, language and even location are all perfectly on-brand, which comes as something of a relief amongst the mash-up going on around him! He suggests that Superman could use his mighty powers to make the world a better place if he wanted to, to which Superman gives the standard, deeply conservative, superhero-genre response that actually doing something to change the world makes you a supervillain. 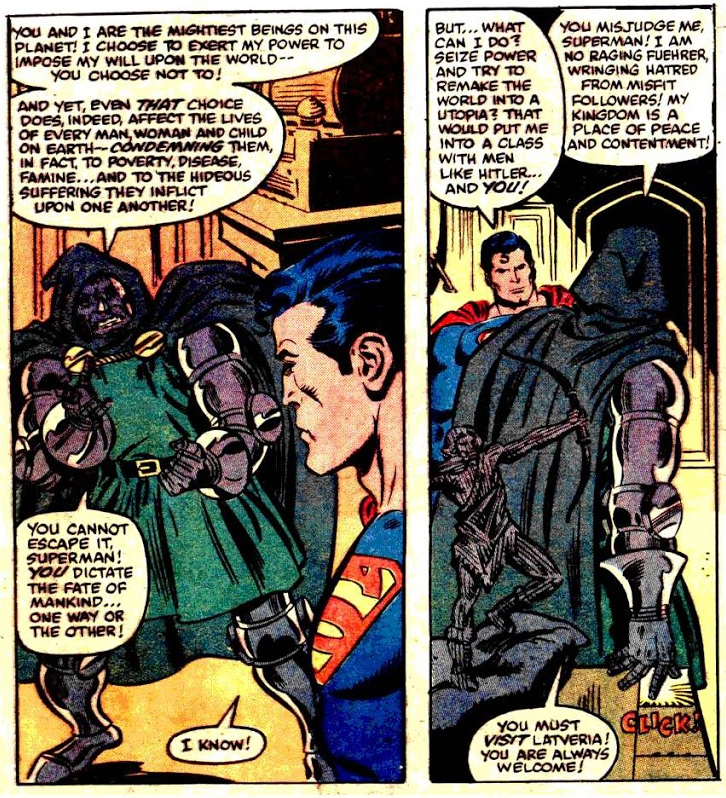 Doom then demonstrates exactly what an actual supervillain would really do, by attacking Superman with a chunk of Kryptonite and then, when his foe escapes the trap, pointing out that he can't be punished because of his own greatest superpower - diplomatic immunity! 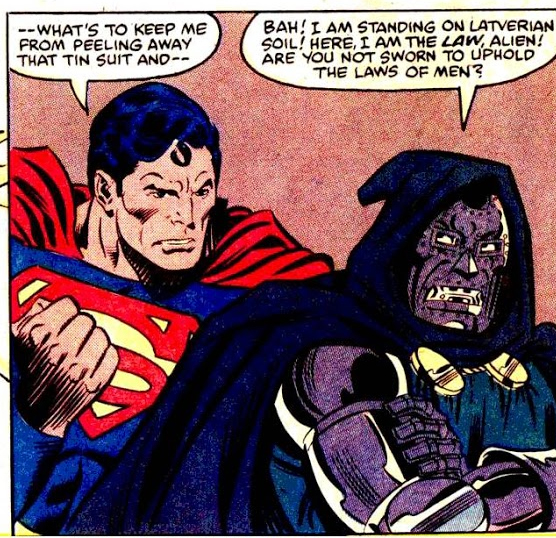 This is becoming like a greatest hits tour for Doctor Doom - surely he will be jumping out of a window at any moment?

Superman is dismissed, and then Doom briefly calls in The Parasite to assure him that, under Doom's guidance,they will be victorious. We then get a humorous sequence where Clark Kent has to hide in a cupboard from J Jonah Jameson while Superman rescues a jumbo jet, before he flies over to Latveria for a little bit of reconnaisance. 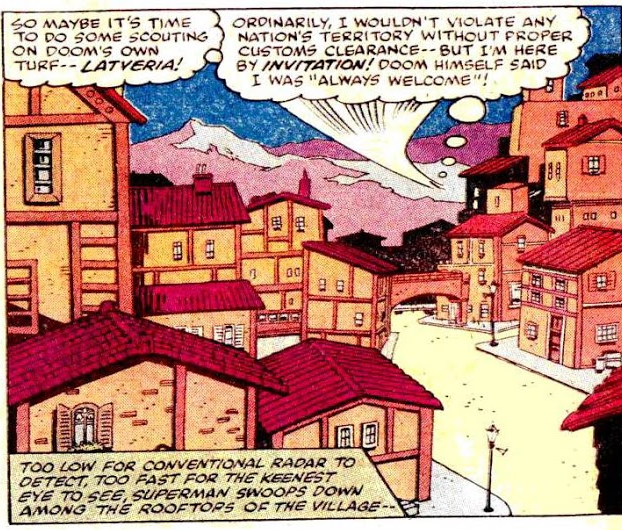 Doom,of course, had expected this to happen, so has lackeys on hand to fire a particle beam at Superman, which doesn't seem to hurt him or, as yet, have any kind of effect. Doom himself, meanwhile, is giving The Parasite a guided tour of his secret base, where he has the Hulk stored in a stasis cube. When the parasite starts to ask questions Doom is forced to show him who is boss. 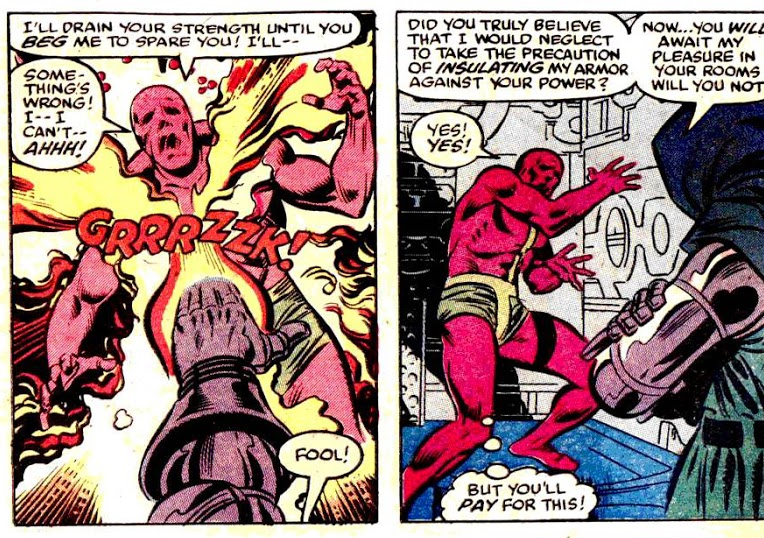 While all this has been going on Spider-man has been wandering round Metropolis, where he eventually discovers Wonder Woman fighting some of Doom's soldiers. She recognises him, and after an initial suspiciousness (she's been reading Daily Bugle editorials) they team-up. 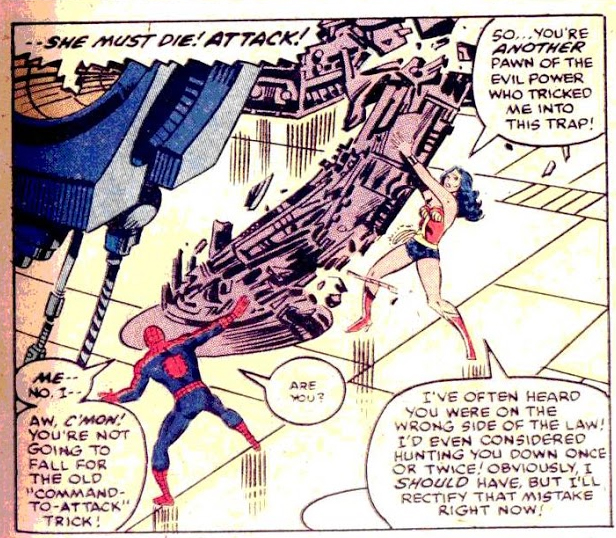 The soldiers are still too much for them, and Spider-man manages to escape while Wonder Woman is captured, much to the delight of The Parasite who has a mad crush on her. When Doom questsions this the Parasite points out that, beneath the "hideous thing that I am" he is still a man and, moved by this simularity between them, Doom decides to tell him the Big Plan for World Domination. He's built "Omega Installations" all around the world which will emit "Omega Radiation" that will destroy all fossil fuels and weapons. Thus, when he presents the world with a fusion reactor providing clean energy for the whole planet, nobody will be able (or really want) to stop him. 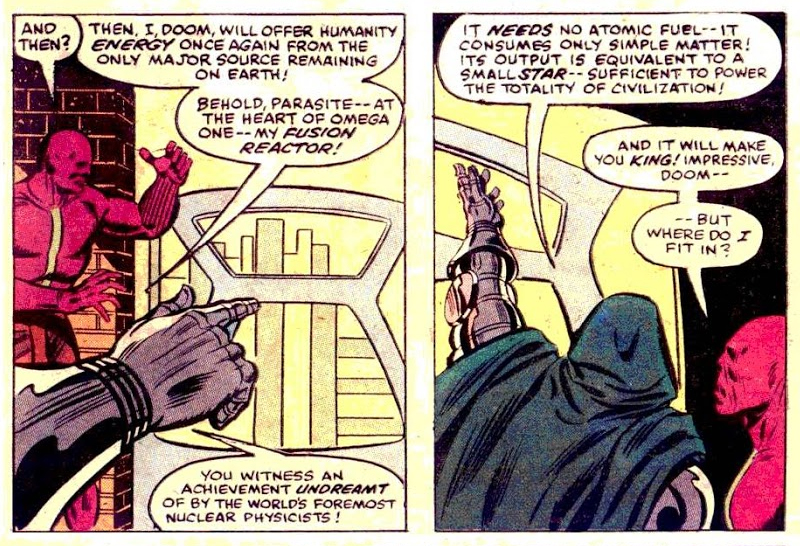 Ooh, what an evil plan! Er... isn't it? Luckily for the world, or at least the fossil fuel industry, Superman and Spider-man finally team-up to stop him, smashing into his secret base where they have a Big Fight with a pumped up Parasite and one of Doom's robots. It's all going really well until Doom himself enters the fray and brings Superman to his knees with the application of (I think) Kryptonite gas. 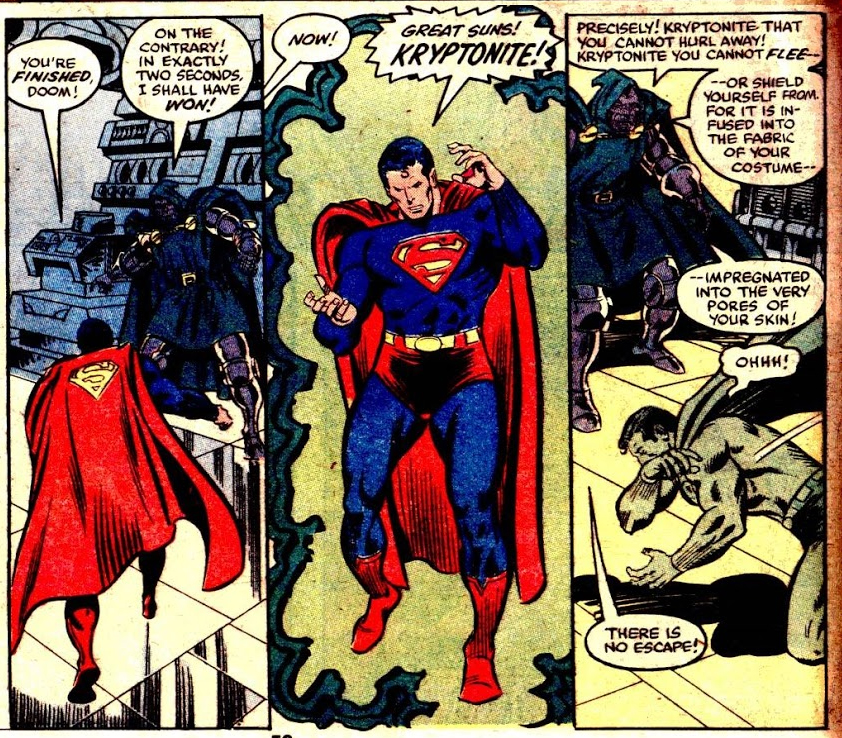 Spider-man is distracted all this and gets walloped by The Parasite, waking up not long after to find himself trapped in the same room as the unconscious Superman and the stasis tubes containing Hulk and Wonder Woman. Things look bleak - if they can't escape Doctor Doom will destroy fossil fuels and weapons and inflict clean energy on the world, the absolute fiend!

While Spidey tries to flex his webshooters to somehow free Superman, The Parasite gets a sudden jolt of spider-sense, stolen earlier from Spidey. He suddenly realises that Doom is about to betray him (another classic Doom trope!) and the pair have a punch-up which leads to Doom's falling into, and breaking, his own control panel. 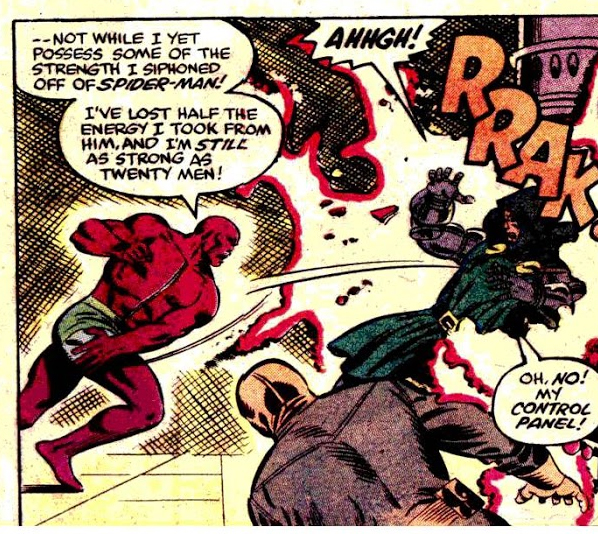 Spidey and Superman break free, stop the Parasite and halt the Omega Radiation just in time. Phew! And what is Doom doing during all this? He's jumping out of the window and legging it down the road to the Latverian Embassy! 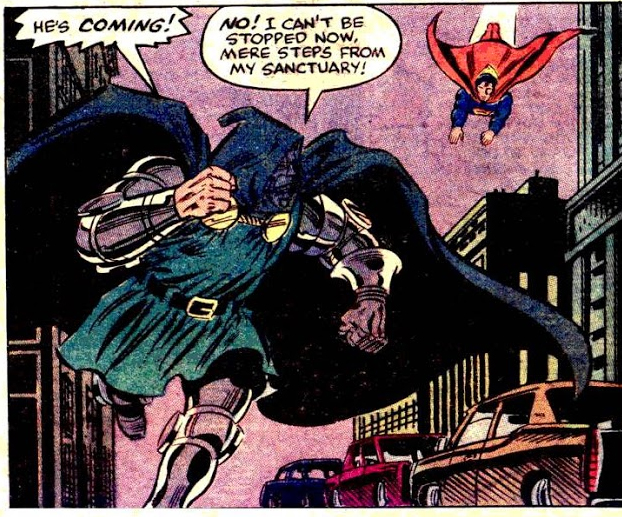 BINGO! I do believe that that's a full house of Doom activities! Superman and Spider-man can't do anything more about it, so head back to their respective cities, happy to be back where they belong. 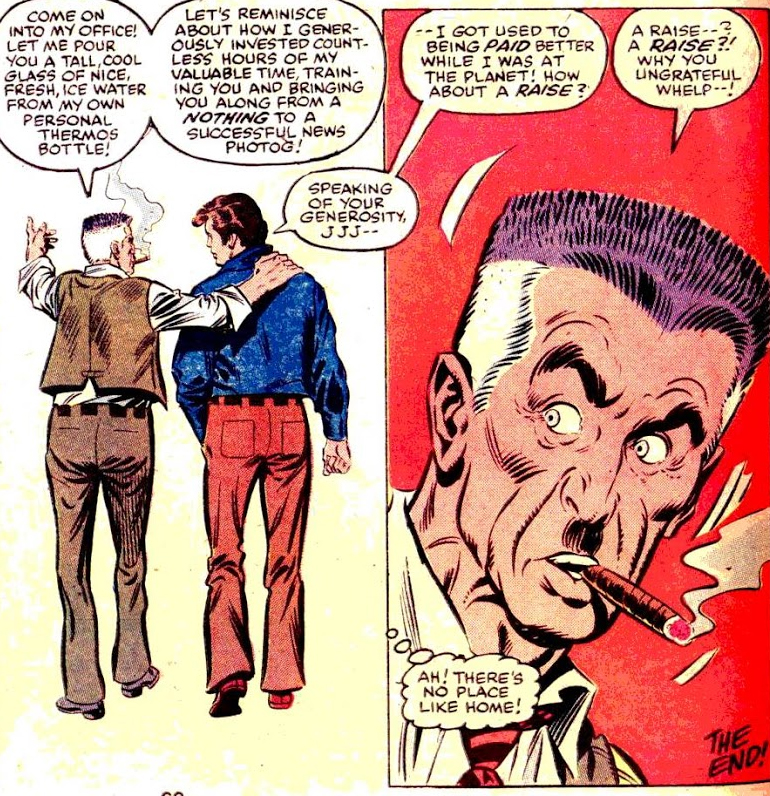 It's a cosy ending for what has been a thoroughly fun mash-up of the two universes, where many things have felt odd but Doctor Doom has proven to be the perfect portable supervillain, maintaining his character whatever happens. In a couple of weeks we'll see him doing this again in the world of cartoons, but next time we're back to a much more familiar alternate universe, as Doom returns to Spidey Super Stories!