Last time we loooked at an episode of the 1981 cartoon "Spider-man", a series which never aired in the UK (at least not in my ITV region). This week we're looking at a series that definitely did, as "Spider-man and his Amazing Friends" appeared on ITV at just the right time in life for me to be incredibly (very cleverly) cynical about it, mocking it constantly for its silly storylines and wooden acting. I still watched it every week though!

Both series were broadcast at the same time in the US, although where "Spider-man" was quite like the comics, "Amazing Friends" had a much more sitcom-like attitude, with regular interludes where Spider-man, Iceman and Firestar (the "Amazing Friends") would hang around in the home they shared with Aunt May and Firestar's dog, Ms Lion.

The show ran for three season, but Doctor Doom only appears in two episodes, and one of those is a barely noticeable cameo. Despite this, he has a regular space right at the end of the title sequence, a top billing which shows yet again what a recognisable, marketable, character he's become. 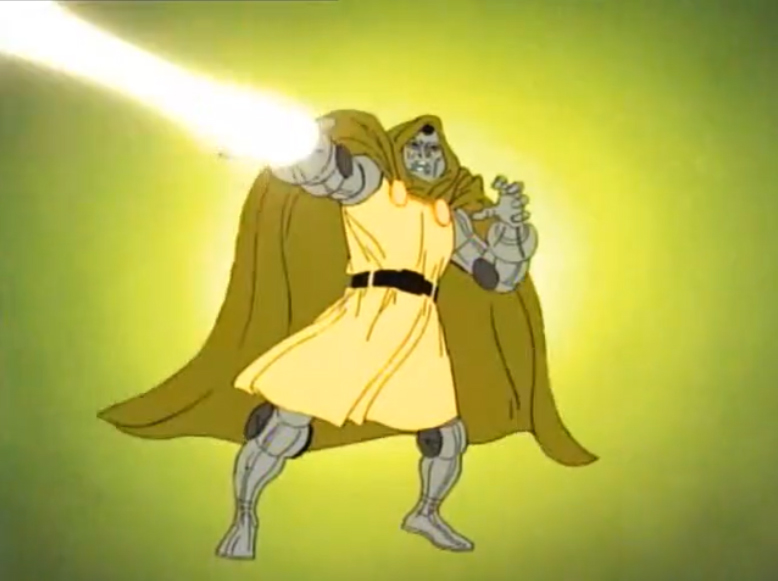 It's noticeable that this version of Doom has the lighter coloured tunic and darker elbow/knee details of the "Spider-man" cartoon, although the image used for the title card is the classic John Buscema pose which crops up time and again in Marvel marketing.

The action begins at the Latverian embassy, although for some reason the spelling has been changed here to "Latvaria". 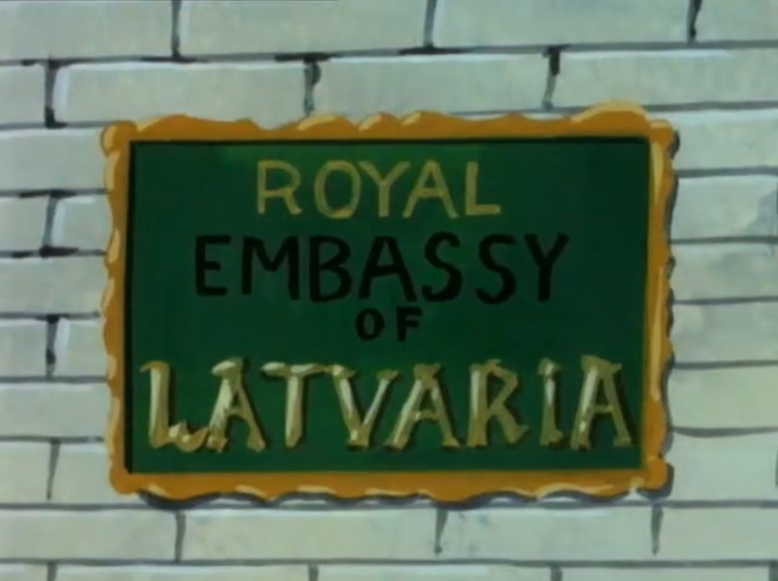 Doom stands on the roof, wearing an amulet that reminded me, through no fault of its own, of the one from Sabre Wulf - a game which, by the way, I was national champion of in Crash magazine for two months running, although I don't like to go on about it. As stated earlier, this version of Doom is similar to, but not exactly the same as, the one in "Spider-man", with a longer tunic and slightly different mask. Whilst researching these two series online I found that there's no clear relationship between them, despite both being made at the same time. Characters appear in both series, and occasionally events from one are vaguely referenced in others, but stories also contradict each other.

Excitingly, if you're the sort of person excited by Doom's supporting cast, this cartoon also features Boris, the old retainer, who is sent to collect the final piece of the amulet which will give Doom "the power of the universe". 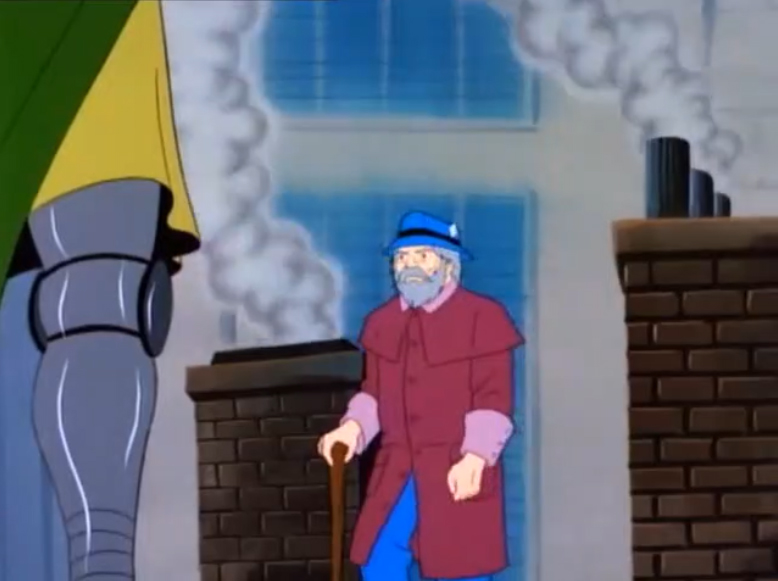 After an (annoying) interlude with Peter Parker and Firestar's dog, we see Boris pop into a museum and steal the final piece of the amulet. It takes about 3 seconds to do it and nobody chases him, which explains why Doom chose an old man for this mission rather than bothering to send the robots.

While all that's going on Spider-man and his Amazing Friends are heading back from a trip to a baseball game (in their civilian identities) where they bump into a sad figure who Peter recognises as Mr Frump, an old friend of his Aunt's, getting the sack from his job. Firestar rather patronisingly tells him to keep his hopes up as "you never know when good luck will strike." "Sure," he says, and slumps off.

Back at the embassy, Doom has assembled the amulet and has got Boris switching on a transmitter which "will mix the ancient with the new, science with sorcery" - a classic characteristic of Doctor Doom. The magic words on the amulet will, apparently, bring forth a cosmic ray which will make Doom "Lord of all the earth - and beyond!" 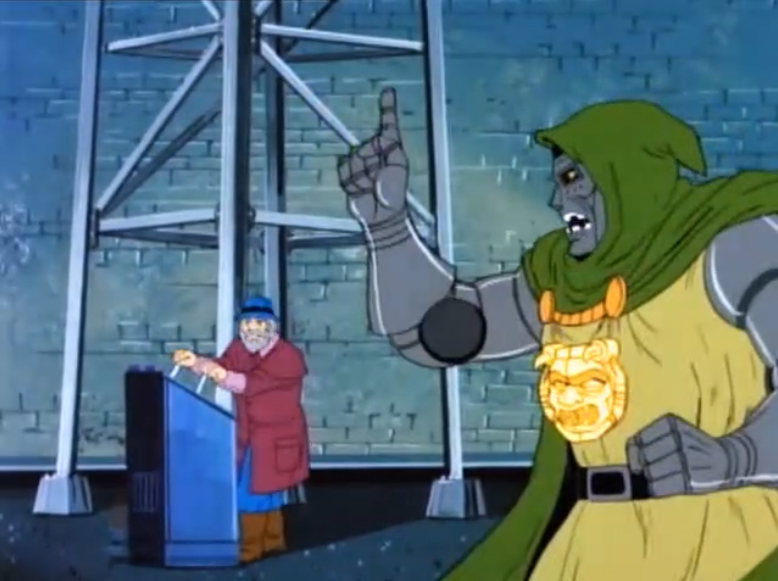 The Amazing Friends are still heading home from the baseball game, and decide to have a race back. It's a weirdly childish bit of action which, I remember at the time, made me think that this series was definitely "for kids". While taking a shortcut to try and catch up with the others, Spider-man sees Doom up to something, but before he can stop him Doom casts his spell. "I didn't know you were into magic", says Spidey, which seems a bit odd, as he definitely is, and then uses his webs to knock Doom over. The amulet goes flying and lands at the feet of Mr Frump, who gets struck with the cosmic ray and becomes "the most powerful being in the universe." 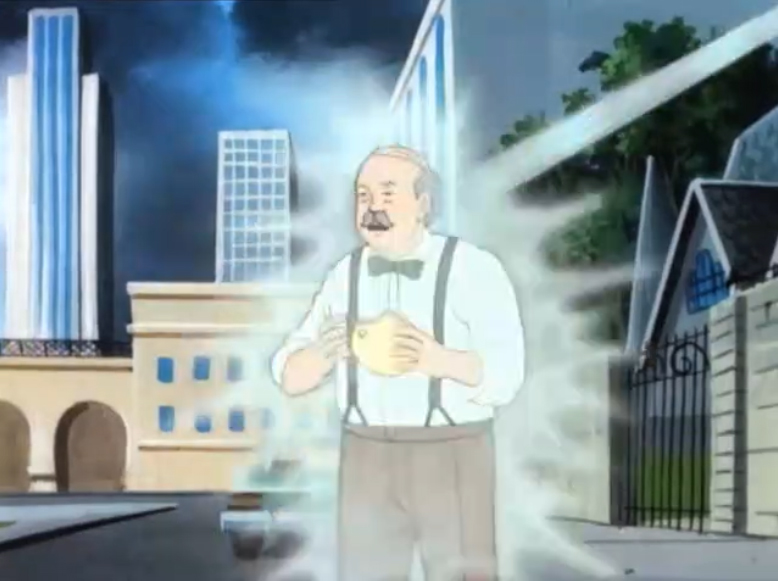 At this point I have to pause and say how familiar this storyline is to Fantastic Four #234, where the most powerful being on earth is a dowdy middle-aged man called Skip Collins who doesn't realise he has amazing powers. That comic has a cover date of September 1981, so I wonder if it's just a coincidence, or if one of the storylines was based on the other?

Back in the cartoon, someone tells Mr Frump to "Bug off". "You bug off," he replies, and the nasty person gets turned into a giant insect. Mr Frump runs away! 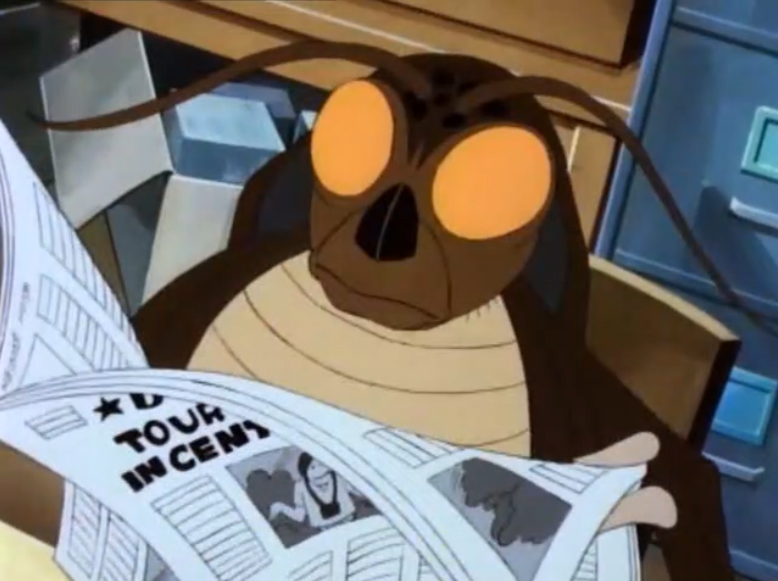 Later some kids tease him and he tells them to "go jump in a lake", so they do. He tells another to "clam up" and they turn into... a clam. Gradually he comes to realise that his dreams can all come true, and gives himself new clothes, a carriage, a hotdog, and a pet cat. Who can honestly say they would choose differently?

Back outside the embassy Doom and the Amazing Friends are fighting over the pieces of amulet, with Doom keeping the three heroes at bay fairly easily, stunning them with a "sonic siren" and blasting them with some pretty impressive Kirby Krackle. 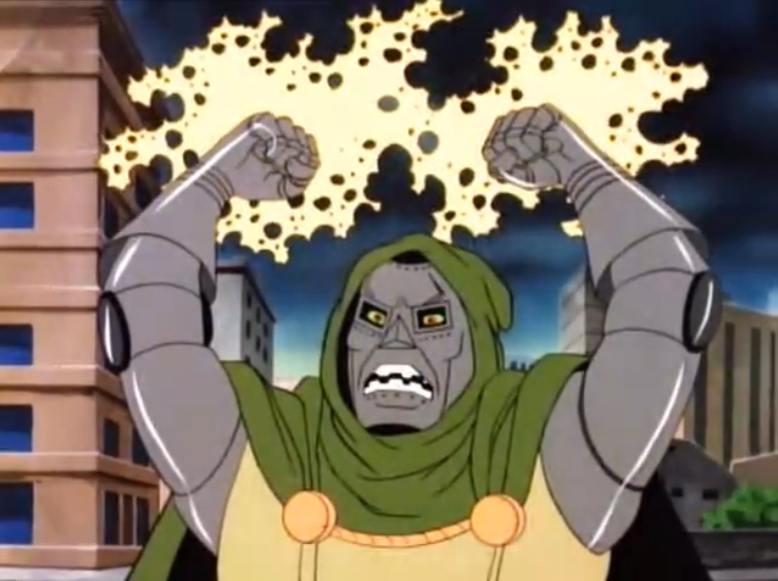 It's only when Frump starts to get more ambitious, changing the sky to rainbows and turning the buildings psychadelic, that they realise someone else has taken the power of the amulets. Frump summons Doctor Doom to explain what's going on, and Doom thinks quickly, saying that he deliberately gave Frump the powers. He offers guidance, suggesting that the Amazing Friends are his deadly enemies, so Frump summons them and turns them into stone. Doom and Frump have a good old laugh about this. 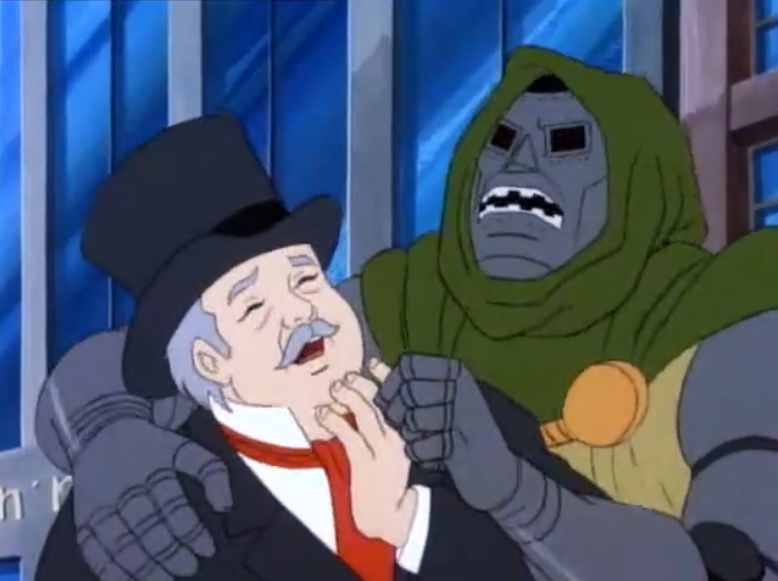 While Doom rages about the amulet also getting turned to stone, Frump next summons Aunt May to be his companion. She's frightened to see Firestar has been statufied (she's not bothered about Iceman and Spider-man) so Frump brings them all back to life and then, when Doom protests, removes their superpowers. For someone with all the power in the universe he's very easily swayed!

Doom still has all his own abilities and is about to crush the heroes when Frump summons "all the money in the world", which falls on Doom's head, allowing them to escape. Frump then summons a big car, a yacht, and a massive telly. Doom suggests that a better entertainment might be to force the friends to fight various historical monsters. He gives them back their powers to do this, and it culminates with them fighting "the weirdest creature in the universe." When Aunt May takes fright Doctor Doom loses his patience and blasts her into the arena, where the creature grabs her. 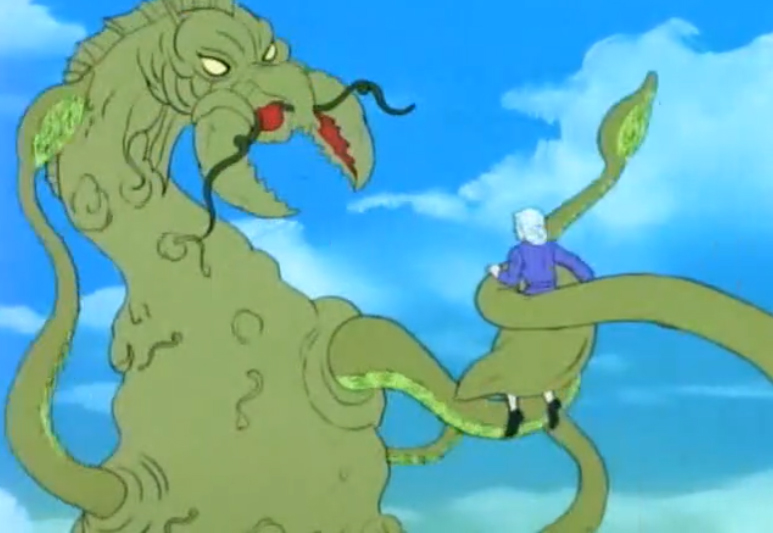 Frump decides to save her, transforming into "Wonder Frump - the most powerful superhero in the world." 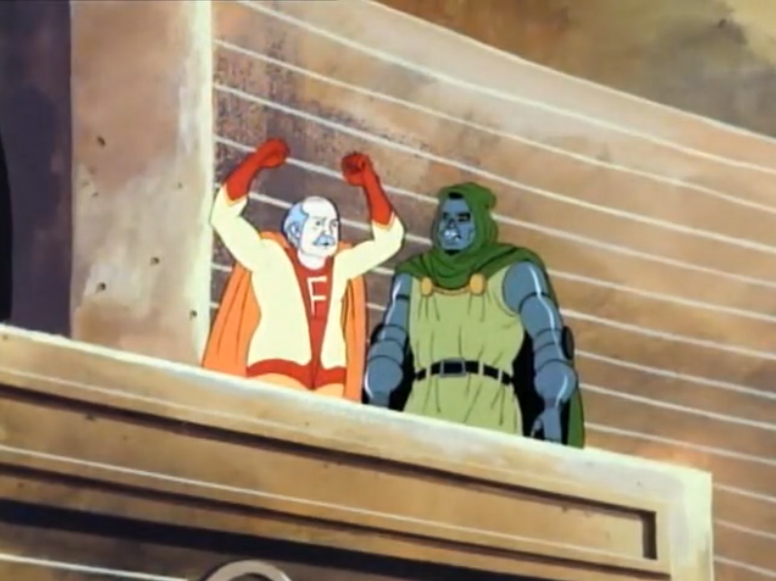 He beats the creature, saves Aunt May and flies off, leaving the Amazing Friends stuck with Doctor Doom. He offers them a deal - join forces with him to stop Frump. Again, it's a classic bit of Doom plotting, as they face a villain so evil that they must all join forces.

Doom tricks Frump by telling him that his powers will disappear in an hour unless he repeates the original incantation. The Amazing Friends back him up, though they have to cross their fingers behind their backs to get away with fibbing. 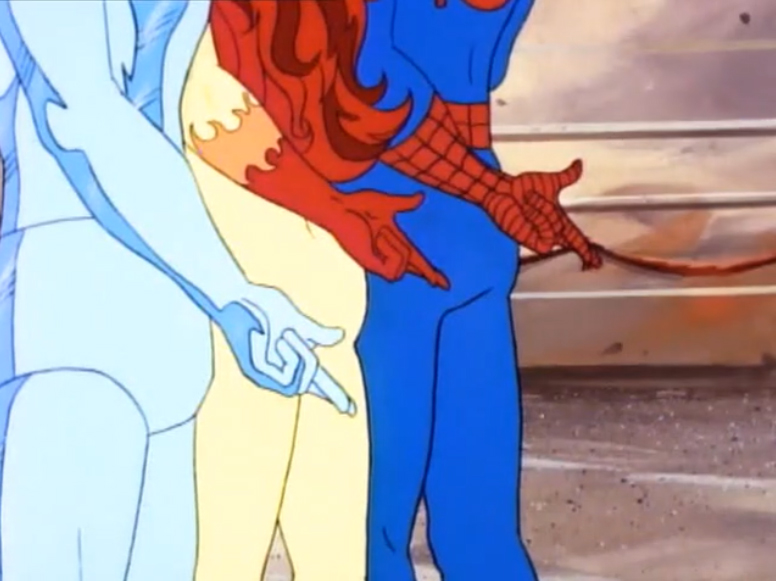 Doom fools him into repeating all of the original circumstances, stealing the amulet for himself so that this time he'll get the cosmic powers. A battle breaks out in which Doom kidnaps Aunt May and Frump decides to save her. In the confusion the amulet gets smashed, depriving both Doom and Frump of the powers of the universe. "But there is another amulet somewhere", says Doom, "and I will never stop searching for it". As good as his word, he flies off into the sky to start looking right away. 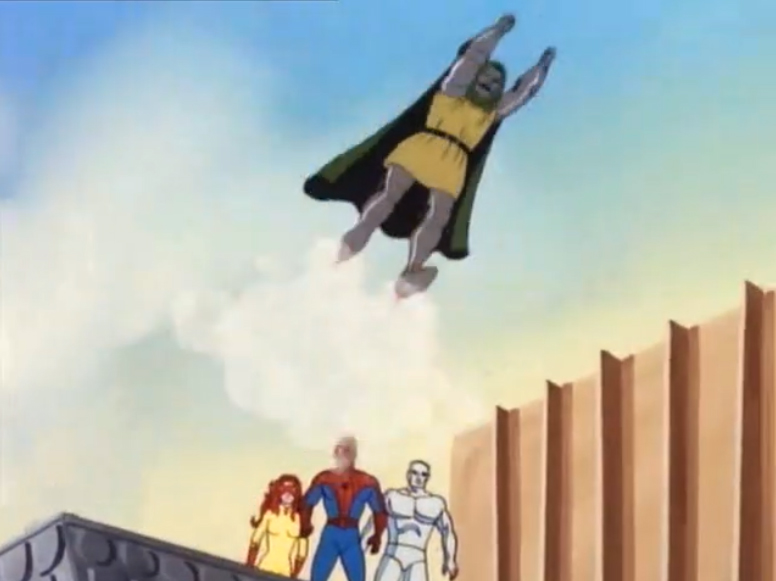 Everything returns to normal as everyone forgets what's happened, and that's the end of the show. I must admit I was sort of relieved to find that "Spider-man and his Amazing Friends" was just as rubbish as I remembered it when I first watched, and I'm glad that Doom's other appearances are going to be in the much better "Spider-man" show!