It all kicks off right in the middle of a battle between Doctor Doom and a Mysterious Bald Man (who we soon find out is called Goron), doing battle using Kirby Krackle and Multi-coloured Eye Beams respectively. 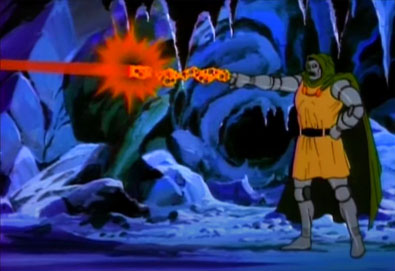 The two men clearly have a history as during the battle they reminisce about previous occasions on which they've fought. After being unable to beat each other Doom suggests a truce, offering Goron "half the world" if he'll help with a scheme to make everyone trust Doom "one last time". I have a horrible feeling this is going to involve the UN again!

Over in Manhattan J Jonah Jameson gets a fax telling him that Doctor Doom is inviting dignitaries to Latveria to show off his latest scientific discoveries. "I knew he was my kind of guy" he says, apparently forgetting that Doom very recently kidnapped him for several days and replaced him with a robot duplicate!

We then go over to Latveria to see Doom leading the delegates on a tour, where they witness some Latverians (in their usual Sound Of Music gear from the comics) chanting "Long live Doctor Doom!" 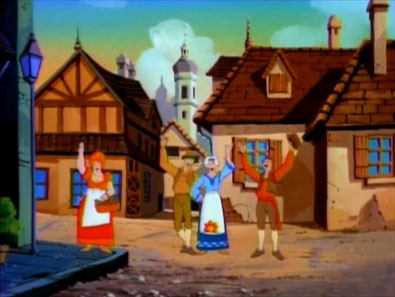 "Ze people, zay zeem to lurve 'im" says a French (I assume) delegate. The American (he's wearing a cowboy hat) isn't convinced, but then they see a "very impressive new factory", which is being cleaned by... the rebellious peasant we saw last time! 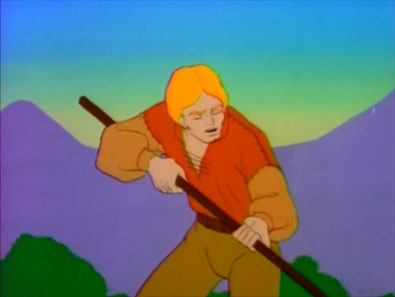 It's a continuing story! He muses that it's all very beautiful, as long as you don't go round the back and see that the factory is just a film set, and also you ignore the fact that "we are all prisoners of Doom."

That includes his father, who's working in a lab where he discovers that Doom is creating a robot replica of his rebellious son, who we are told is called Johann. 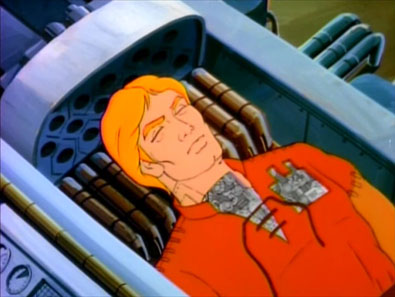 We then return to the party of delegates, who are being shown Doom's amazing invention: Giant vegetables! 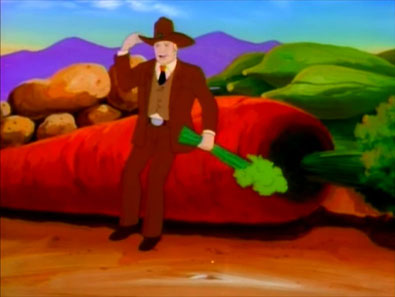 The delegates frantically bid against each other for the rights to grow massive marrows, then hop into a car to go back to base. On the way they meet Johann, and ask him what he was "so fired up about" earlier. This seems odd, as they never actually met him, but anyway the robot reassures them that everyone in Latveria loves Doom, and they carry on their way back to the castle, where they have a slap-up feed of giant vegetables. "Truly a meal fit for a king!" says the French delegate. 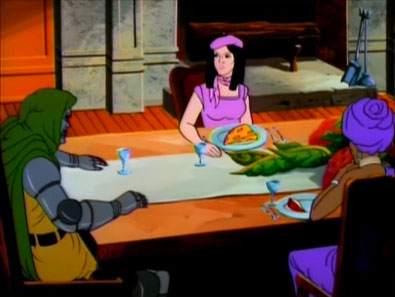 Doom offers them the Colossal Carrot technology for free, which everybody apart from the American thinks is great. "Have you forgotten what Doctor Doom did at the UN?" he asks. "How can we trust him?" This surprised me on first viewing, as for the most part it seemed that everybody had forgotten completely, but it's a great bit of continuity which goes alongside the Johnann plot to show that this is a series taking inspiration from the continuing storyworld of the comics.

Doom presses a buzzer which calls in Goron, who uses his special Blue Eye Beams to zap the delegates with mind control which forces them to eat the vegetables, forget their suspicions, and also invite Goron to visit the USA.

"It can be arranged" says Doom, and in the next scene we find Goron giving a presentation to the press, durng which he zaps the vegetables with Green Eye Beams, and they grow right in front of their eyes! 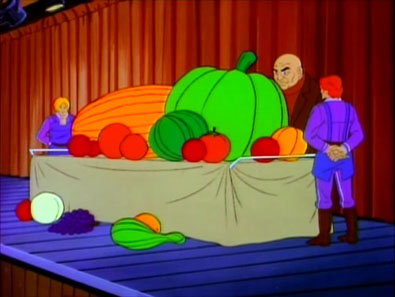 "I want a closer look at this", thinks Spider-man - you remember Spider-man don't you? He's not been in the show for nearly ten minutes and he's supposed to be the star!

The journalists tuck into the giant vegetables eagerly, begging Goron to bring Doom to NASA the next day (I'm not sure why) and, without the need for mind control, completely forgetting Doom's history. "Doctor Doom might be the greatest man who ever lived!" says one. Some might suggest this is unrealistic, but it sounds like standard journalistic practice to me! 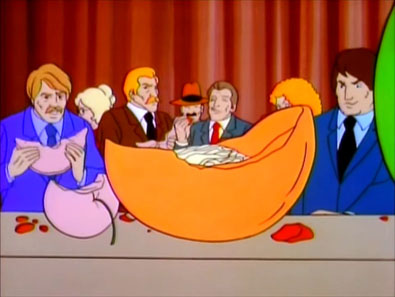 Spidey suspects something's up so swings in for a look, only to be attacked by Goron and his Red Eye Beams. Spidey runs away, into a back room, only to be followed by Goron who knocks him through the floor into the basement. He then uses his Green Eye Beams to enlarge some mushrooms, which attack Spidey! 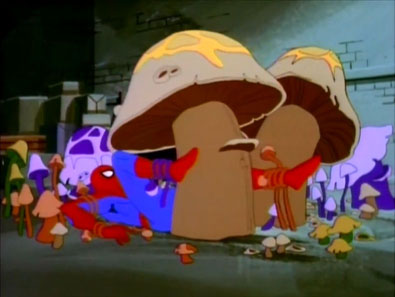 Spidey fights this terrifying menace by kicking it quite hard, but when this doesn't work he webs up a fir extinguisher which freezes the aggressive fungi, in exactly the way that fire extinguishers don't. It's all a bit odd really, so it's a relief to get back to Goron, who is at Cape Canaveral where they're watching a rocket lift off. "I'm not sure how this will help feed the world" says a Rocket Scientist, and you don't need to be a Rocket Scientist to see that he's got a point. "Doctor Doom was sure you'd feel that way" says Goron, who locks them in a conference room, melting the door shut with his laser eyes. The fiend!

Spidey arrives to find Goron in the computer room. He uses his Red Eye Beams to shove Spidey out and into one of those test pilot spinning machines which then activates at full speed. Poor Spidey, he can't get a break! Goron goes off to steal the rocket's guidance system, which is apparently what they're after. "Who would believe something this tiny would hold within it the fate of the world?" he says as he trousers it.

He then uses his Blue Eye Beams to force a member of staff to give him the secret launch codes for the space platform (whatever that is), which he then sends to Doctor Doom, who we discover relaxing on his throne back in Latveria. 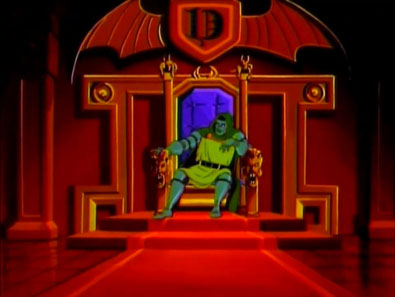 I know a lot of this show is a bit silly, but they do have some nice designs!

While Spidey escapes from the spinny thing, Goron hacks into every computer everywhere and uses the codes to take control of every nuclear missile in the world. He then makes a broadcasst giving the entire world five minutes to proclaim Doctor Doom as their ruler- but before he can finish explaining the process for this Spidey (finally) arrives. Goron doesn't care - there's a secret code word to stop the missiles that only he and Doom know, and if it isn't used in time the human race gets obliterated!

Spidey runs away again, leaving Goron to teleport a device which can control the space platform back to Doom. I'm not really sure what's going on here, to be honest - lots of different bits of plot seem to be flying about all over the place! There's no time to worry about it though, as Goron zaps Spidey with his special Toothpaste Coloured Eye Beams, only for Spidey to turn them back on him with a mirror! 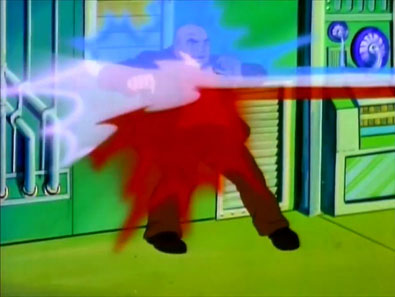 This changes Goron "back to his real form", an old man. What on earth is that all about? I've watched this cartoon a couple of times, and checked elsewhere online, and there's been no mention of Goron ever appearing before or having any other form. I suppose this too is a bit like the comics, with a much bigger story that we don't see all of, but it could also be the writers just chucking as many ideas as possible in to get to the end of the story!

Spidey has only two minutes to stop the missiles, and so has to guess Doom's secret codeword. What could is possibly be? 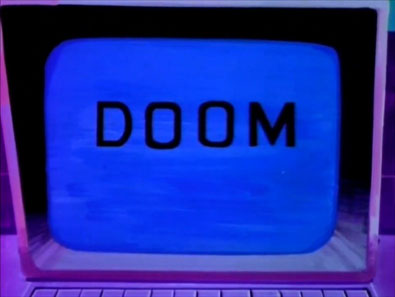 Naughty Doctor Doom - that is definitely NOT a Strong Password - next time at least try d00M or something!

And that's the end of the story, apart from a coda at the Daily Bugle's office where they discover that Doom's vegetables rot away after two days, and Betty tells Peter off for missing a date. It's a slightly underwhelming end to what's been another enjoyable episode full of daft, pointless chunks of plot and some great Doom Signifiers throughout. More please!