The Eyes Have It!

When I was little I used to long for books where nothing much really happened, so that I could enjoy the characters without getting anxious about the plot. I particularly remember reading The Famous Five books, and wishing that there was a story where the children didn't go on an adventure, so that I could enjoy their company without worrying about what was going to happen next.

I mention this because that's one of the things I love about this particular issue, and John Byrne's run on this series as a whole. Things do happen pf course, and all the usual superhero story tickboxes get ticked, but there's also a lot of Narrative Admin going on, where people chat to each other and their lives carry on without them needing to fight Galactus all the time. In theory the main story here is about Reed and Sue meeting a Space Alien who, it turns out, is robbing banks because she's drunk on the high oxygen content of Earth's atmosphere, but that storyline doesn't even get started until halfway through the issue, as we're busy spending time with Johnny Storm and his mysterious girfriend, Reed and Sue on a date, The Thing and Alicia dealing with the aftermath of their "marriage" in the previous issue, and the whole problem of what to do with Doctor Doom's comatose body after defeating him in "Liddleville". 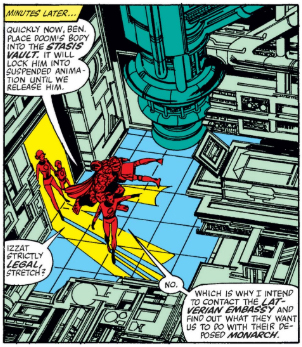 Reed decides to store Doom in a stasis field while they contact the Latverian Embassy, which is bound to work out fine and probably means that this is the last entry for this blog, because Doom will never get out of this one. Unless... he does?

Anyway. the main reason I love this particular comic is that it's the first issue of John Byrne's run on "Fantastic Four" that I ever bought. In fact, it's one of the very first American comicbooks I ever bought too, from the newsagents near the Rainbow Superstore in Market Deeping. I'd always get "2000AD" from Jack Blades' newsagent in the main marketplace on a Saturday, using pocket money from my Nan, but the other newsagent round the corner had different sweets and different comics, so was always worth a look. I've still got that comic now, and as you can see, I read it a lot of times! 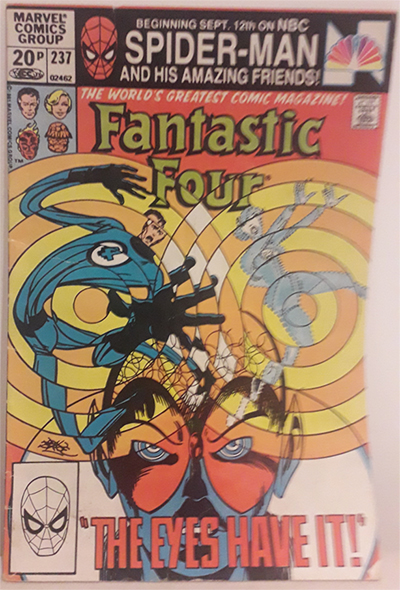 It's not one of the best, or best-remembered, stories in this run, but parts of it have stuck with me for decades, especially the final panel, where Mr Fantastic explains that the giant blue space alien comes from a race of clones and so assumed that everybody on Earth would look the same as her.

This stayed with me partly because it seemed like such an amazing sci-fi idea, but also because of the expressions on Reed and Sue's faces. They look like two people who actually really like each other, sharing a joke together. I sometimes think of it when I'm sat at home with my other half, talking things over and just enjoying each other's company, without having to worry about what's going to happen next, or whether Galactus is going to show up while we're trying to watch telly.

And that's all the self-analysis we have time for this week - next time, back to the cartoons!