As promised, we're back in the world of the 1980s "Spider-man" cartoons today. This is the first of three episodes in a row that we'll be looking at and, to be honest, they should really be called "Doctor Doom" cartoons as he's very much the main character in a continuing story which, certain Scholars Of Doom would argue, is the best ever representation of the character outside of comics so far.

The story kicks off in a snowy Latveria, where the people are being put to work building a satellite tracking station for Doom's latest scheme, much to the dismay of Doom's faithful servant Boris. 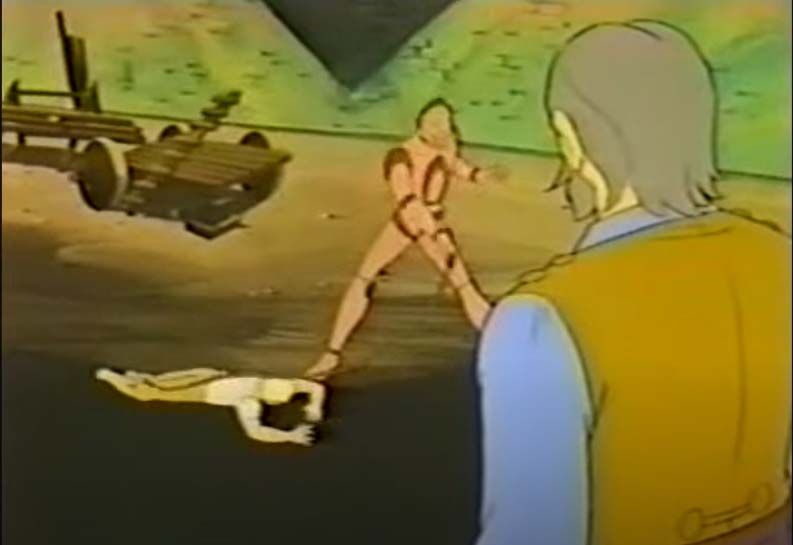 I can't help but feel that this is a poor use of resources - wouldn't it be more sensible to get his army of robots to do it, instead of using them as middle management?

Boris takes this up with his boss, who is distinctly unimpressed. "The people have only those rights which I choose to give them," he says. It's all tied in with the space platform and the device that Goron stole for him last time - another example of the ongoing continuity in this series. 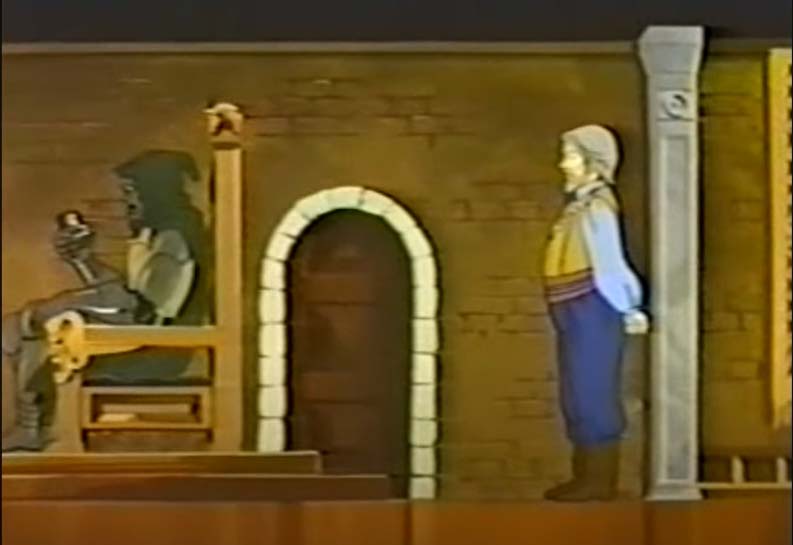 This carries on as they discuss Johann, the revolutionary leader who is still in prison since last time, before moving on to the new cunning scheme whereby Doom will use the laser cannon on the space platform to ignite a series of explosions which will open up a new volcanic fault beneath New York City. The fiend!

Doom sets off for New York, where he's been invited by J Jonah Jameson, carrying on his soft spot for the dictator. Ny DVD boxset of the series says that it's based on the newspaper strips, where we saw Jameson regularly crawling to Doom, so that makes sense.

Next we drop in to see Peter Parker tending to a poorly Aunt May - this is five minutes in to Spider-man's own show, and he's not even in costume yet! He does finally set off swinging through the city, where he spots a newspaper talking about a supposed new fault line under the city, which "will be great for my geology class". He does have a varied curriculum!

Later at the offices of the Daily Bugle Robbie Robertson tells Peter that Doctor Doom has arrived at Jonah's Long Island estate, where he's demonstrating a drill which can burrow to the Earth's core and thus (somehow) provide free energy for the whole city. Peter heads over to "take pictures" and finds his Spider Sense going crazy - the new fault line is right under Jonah's estate! 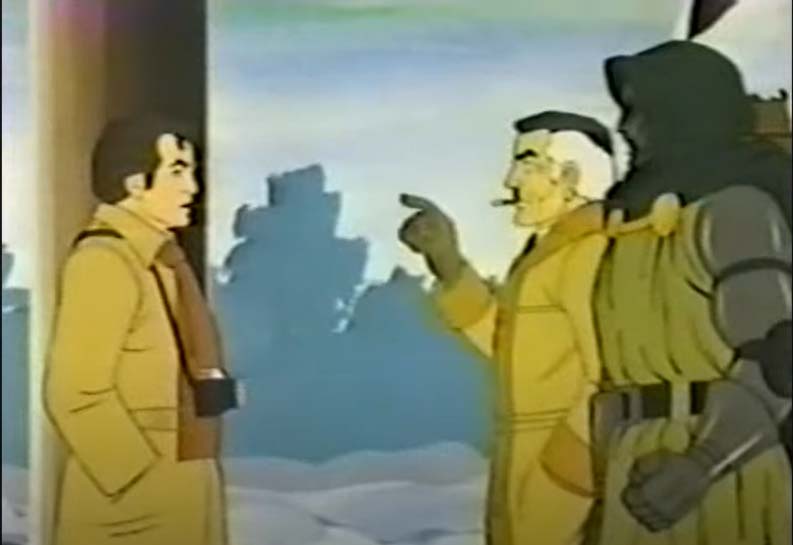 Peter goes off and changes into costume in order to stop Doom's laser drill hitting the fault line, and a fight breaks out between the pair of them, which Doom wins by emitting a high pitched sound which, apparently, spiders are particularly vulnerable to. I checked online and it turns out that this is true, but there's no mention of whether they're also vulnerable to Kirby Krackle. 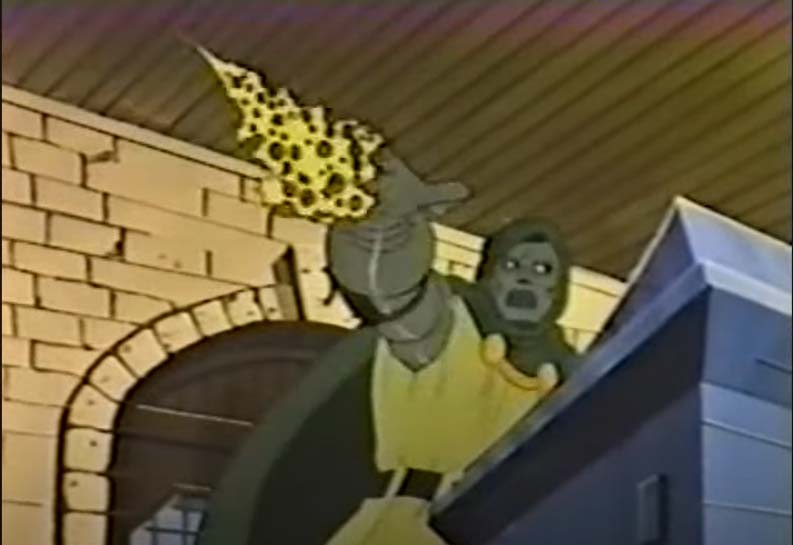 With Spidey disorientated the drill hits the fault line and the earthquakes begin as planned. Spidey falls into a crevace and Doom declares "the end of Spider-man." We then get an unusually detailed, very comics-styled close-up of Doom as he demands that Jonah gets the President on the phone, before he destroys New York for good. 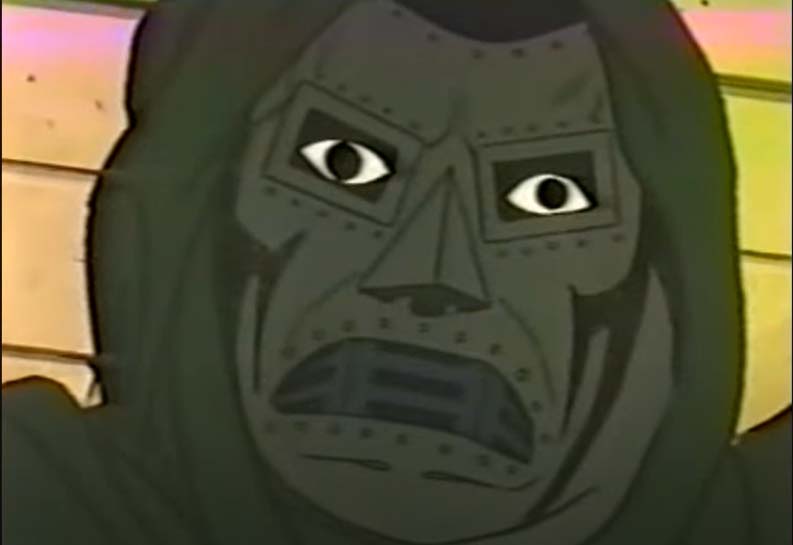 Back in Latveria we find Boris witnessing the oppression of the Latverian people at first hand. He goes to visit Johann and, after a brief misunderstanding, claims that he has come to help. He frees Johann, who demands proof that Boris has changed sides. He wants him to say that Doom is a tyrant, but Boris can't bring himself to do it. "I have spent my life serving Latveria," he pleads. 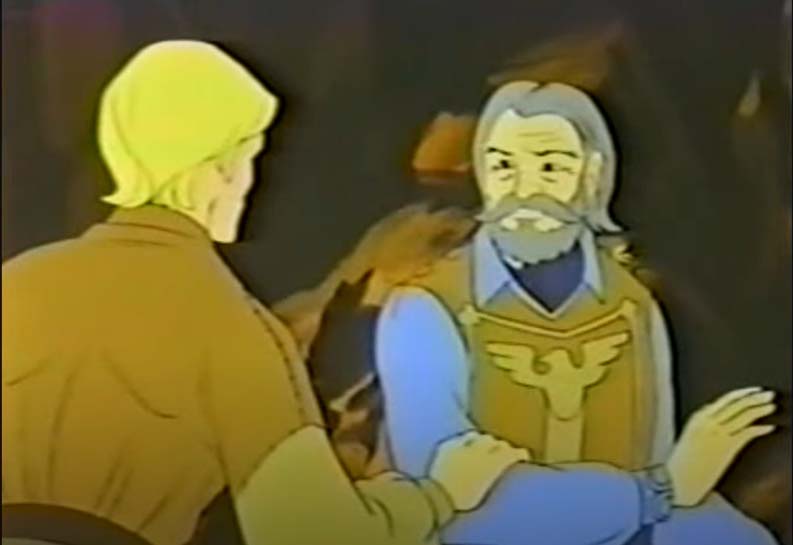 This is a lovely bit of characterisation - it would be easy, especially in a kids' cartoon, for him to change his mind completely and call Doom a tyrant, but this is a bit more subtle than that. This version of Boris feels quite similar to the conflicted character we see in the comics, aware of what Doom is but serving him nonetheless.

"You're wrong about Doctor Doom", he explains. "He too was a freedom fighter, just as you are." As the pair of them run from Doom's robot there's an excellent cross-fade to a picture of a young Doom and his father running from the Baron's men, and we get a potted version of Doom's origin story, very much like the comics original. Boris discovers the pair of them "nearly frozen to death" and takes them to his camp where the father dies. "They have murdered my mother, and now they have killed my father" young Victor tells Boris. "They will pay! All of mankind will pay for this!" 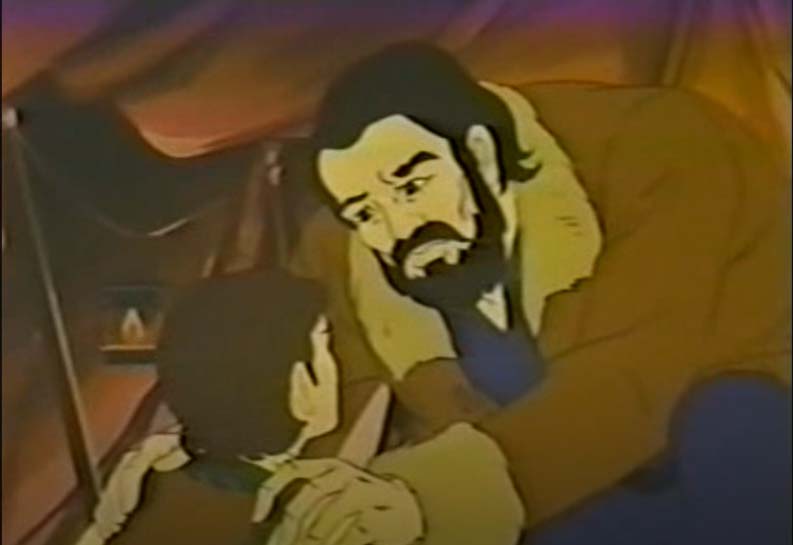 "Even then I had the uneasy feeling it wasn't young Victor Von Doom who would need my protection", says Boris, and then we get a quick run through of the origin as seen in Fantastic Four Annual #2, with Doom selling fake hair restorer and fake gold to aristocrats, who have him arrested. However, the Doom that the Baron's men arrests then turns out to be a robot! 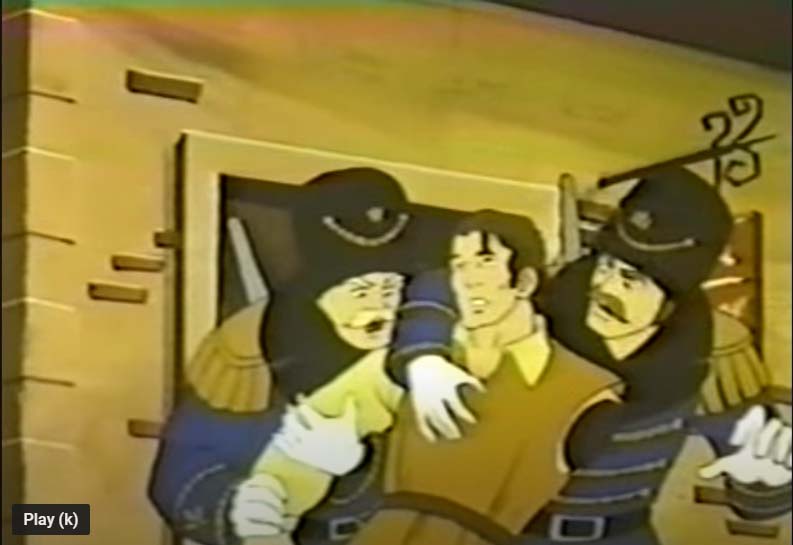 It really is cracking stuff, which follows the comics origin very closely, with Dean Stockton from Eastern State University in America turning up to offer him a "full science scholarship". Doom heads there to conduct "strange forbidden experiments" with a very familiar looking machine. 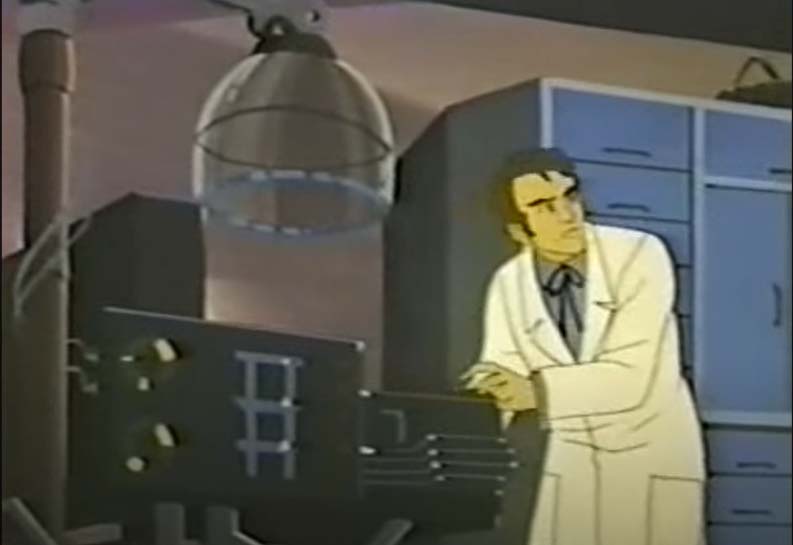 He's interrupted by another student who's spotted some errors in his calculations. We're not told the name of this student, but I've got a pretty good idea who it might be... 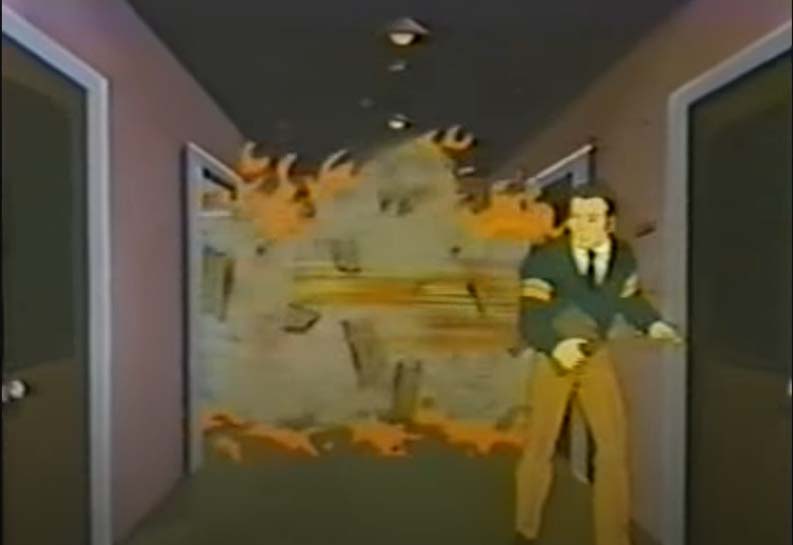 The experiment goes wrong, of course, and Doom is horribly disfigured, so he goes to take refuge with a "mysterious order of monks", and it is "here that he became Doctor Doom!" The ending's a bit rushed, but it's an amazingly faithful retelling of the comics, which doesn't actually deal with how he came to be a freedom fighter, but is great fun in any case.

"A fascinating story but it changes nothing - Doom must be stopped!" says Johann. Boris reluctantly agrees, and gives him the address of some "friends in New York" who can help him. Johann sets off into the snow, and out of this episode. We'll find out what happens to him next time!

Doom himself has got the President on the phone, and threatens to destroy New York City unless his demands are met. "The United States does not barter with terrorists" says the President (whose face is hidden from view) before sending some jets to destory Doom's cannon.

While all that's going on Spider-man (remember him?) finally escsapes from his crevace, just in time to stop Doom from killing J Jonah Jameson. He then tries to shut down the cannon before the airforce arrive and blow the whole place up, but is knocked off course by Doom. His only chance is to use his webs to redirect the cannon, which forces Doom to scarper in the traditional manner with his backpack jets. 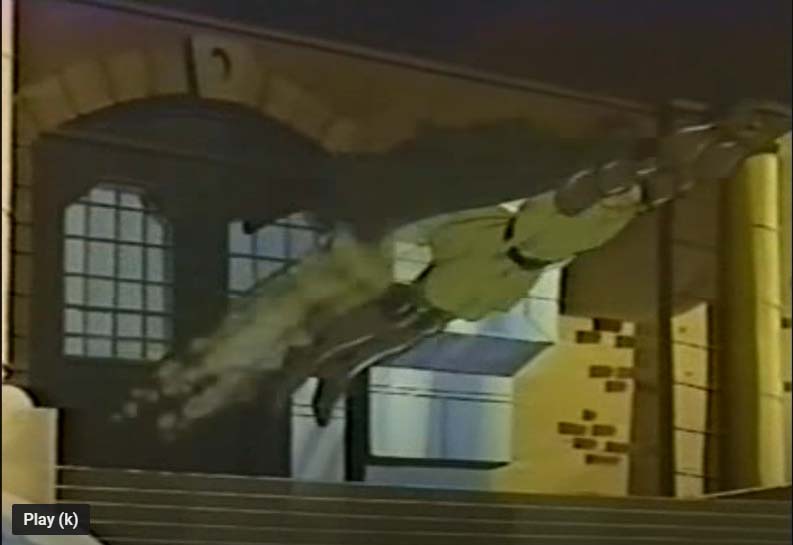 Spidey's standing next to the controls, so one might think he could have just turned the switch back, but instead the cannon blows up its own control system, destroying itself just as the jets are about to fire. Phew!

We then get an intriguing short segment where an unnamed scientist in a NASA jacket turns up and says that happily the cannon can be repaired, but "it must be on the new NASA space platform within the month". This is Doctor Zoltan, who will show up in later episodes - again, setting up the story to continue on through the series.

And that's that, aside from a neat turnaround as Peter brings hot cocoas, this time for Jonah, who's staying in Aunt May's room while his mansion's repaired. It's a charming way to end what has been a really rather surprisingly good, Doom-packed episode in a series which has been surprisingly good and Doom-packed throughout. Next time, more of the same!

(I still don't know why it's called "Canon" rather than "Cannon" of Doom though!)