That sound you hear is me whooping and hollering with glee, because today we're going to be looking at my absolute most favourite type of comic - a Marvel "humour" magazine!

That sarcasm, and those quotation marks, are used advisedly, as there is rarely anything remotely funny about these comics, and "Fantastic Four Roast" is no different. It's a special written and pencilled by Fred Hembeck, who I seem to remember being Marvel's go-to person for this sort of thing in the early 1980s, including a regular strip in "Marvel Age". It's a very gentle sort of comedy that at the time made me oddly grumpy, as it always felt like he was the company jester, making acceptable mockery while still toeing the company line, especially when it came to Jim Shooter. I imagined him as a fanzine guy who had taken the corporate shilling, which was pretty rich coming from me, someone very happy to give that corporation his dinner money every week!

Reading it back now however, I can see there's a definite charm too it, even if it's still not particularly funny, although I may have been swayed slightly by seeing the cover of one of his earlier comics, below! 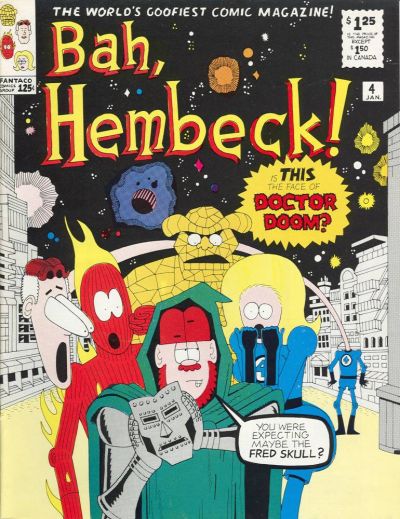 The story here is that the Fantastic Four think they're attending a special dinner where their achievements will be toasted but, when they arrive, the host Fred Hembeck tells them it's actually a "roast", where their peers will come on and mock them. When I bought this comics, back in 1982, this was an entirely alien concept to me, and though these days I've seen a few roasts on telly I have to say it still feels like a weird thing to do - why would you want to watch a famous comedian (it's usually a comedian) pretend to enjoy their contemporaries being unfunnily mean about them?

Clearly this comic still has the power to make me feel grumpy! One thing I did enjoy about re-reading it though was the artists' jam, whereby each page has a different character roasting the FF, with Hembeck's pencils inked by the creators most closely linked with them at that time. This means you get Mike Zeck on Captain America, Bob Layton on Iron Man, Sal Buscema on the Hulk, and even Frank Miller on Daredevil! 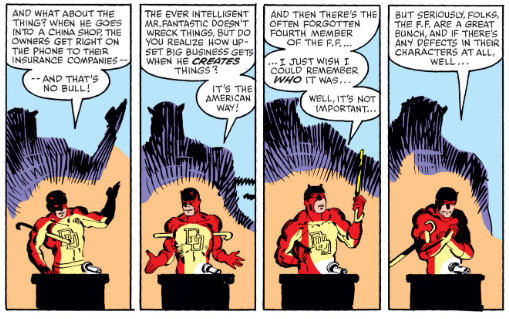 These pages do feel a lot like Not Brand Echh and other Marvel attempts at humour, with slightly exaggerated figures, lots of dialogue, and panels packed with pretty lame jokes. 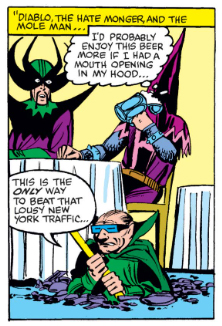 It even manages to squeeze in that old standby for hilarity, Aunt May as a superhero! 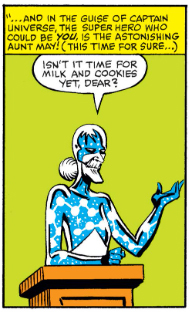 As the story progresses we learn that someone is trying to sabotage the meal and, of course, the main suspect is Doctor Doom. When the Thing mentions this Doom himself appears to say how unfair it is that he always gets the blame.

This leads into a rant which re-evaluates his origin as the result of Reed Richards and other students not inviting him on a "panty raid" back in college, which made him too upset to check his own calculations and thus causing the accident which scarred him. 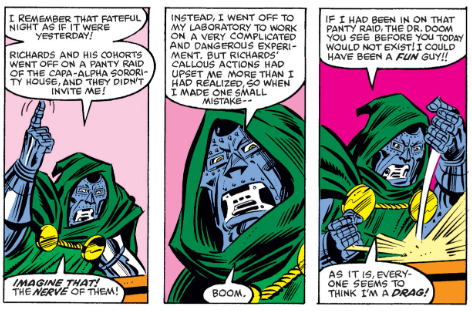 This is definitely a re-writing of the origin, but I think it's safe to say it's not one that was ever taken up by other creators. Doom doesn't appear again, and the issue continues with the villian being revealed to be the FF's mailman Willie Lumpkin, who accidentally fell into one of Reed Richard's inventions. It is distinctly silly from start to finish, something which Hembeck talks about in the inside page, making a claim for this being part of a long legacy of silliness in the Fantastic Four. 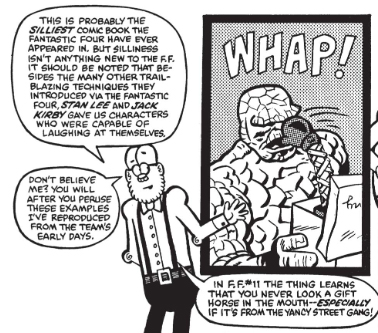