As a big fan of John Byrne's run on Fantastic Four, I was really excited when I saw this comic in my research corpus. It looked like it might be the equivalent of a whole extra issue of his run on the FF that I'd not seen before, with a script by Stan Lee!

When I actually read it, however, I got vague memories of having picked it up in my local comic shop at the time and being too disappointed to spend my saved-up dinner money on it. It is indeed plotted and drawn by John Byrne, with dialogue by Stan Lee, but there's something about it that feels like a fill-in issue done by people who aren't as good as the regular team. To be honest, I think it's Tom Palmer's inks, which make John Byrne look significantly less exciting than he was when inked by Terry Austin, Al Gordon, or indeed himself. It just looks a bit ordinary, especially when the FF show up to give a direct comparison with the ongoing series of the time.

The story itself sees the Surfer indulging in some of the extreme self-pity that Stan Lee provides him with, attempting to escape the force field that Galactus has set up around the earth to keep him trapped. After a lot of smashing and bashing, and some help from Reed Richards, he eventually gets out and flies straight home to Zenn-La, where he discovers that the planet has been laid waste, and it's all his fault. It turns out that when the Surfer left his employ, Galactus (with good reason) decided their original deal was cancelled, so he could quite legally pop back and drain all the life out of the planet. 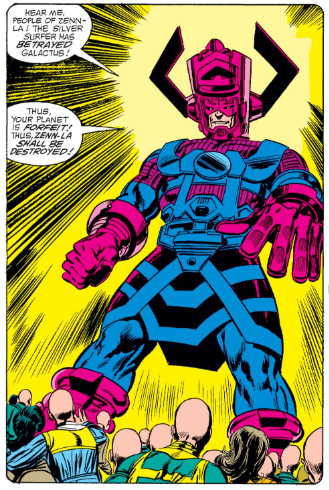 Ever tactful, the surfer goes straight from this tale of planet-wide woe to asking what happened to his girlfriend, Shalla-bal. When he finds out she was kidnapped by Mephisto he flies straight off to find her, leaving behind an entire planet of people whose lives he, at best indirectly, has ruined. 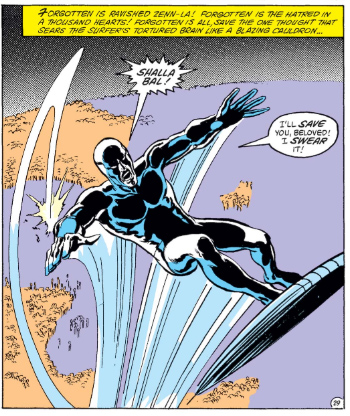 This is where Doctor Doom comes in, with a very brief flashback to the events of Fantastic Four #157 where Doom tricked the Surfer into thinking that he had married Shalla Bal, but then it turned out not to be her, but then - aha! - it turned out that the whole thing was an (over-complicated) scheme by Mephisto to torture all concerned, and it WAS her after all! 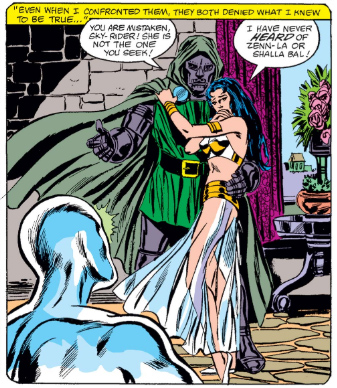 No, I'm not really sure how that's meant to work either. This leads to a Great Dilemma, where the Surfer realises he's got to go back to earth to try and find her, even though this means he will once more be trapped inside the force field, because the thing that Reed Richards did to allow him to escape could only work once. He doesn't spend an awful lot of time considering the matter, which seems a bit daft considering that she might not even be on Earth, and is soon zooming over Doom's castle in Latveria.

He smashes his way in, duffs up some Doombots, and then finds Shalla Bal (or whoever she is), working in the kitchens. Unsurprisingly, after he's blown up the doors of her place of work for no good reason, she's a bit frightened.

At this point Mephisto shows up and the pair of them have a Big Fight in hell, which ends with Mephisto apparently killing Shalla Bal - because he's the devil, basically, and so not worried about cheating. Mephisto then brings her back to life as an energy form, which he then sends off to Zenn-La again, because this will be an even greater torture for the Surfer, knowing she is still alive but that he can never see her again. I don't know, personally I'd have though just killing her would be worse, but perhaps that's why I don't get to have dominion over Hades?

The Surfer chases after her but can't catch up. Then he has a great idea - he'll zap her with the Power Cosmic, so that when she does get home she can "undo the horror Mephisto has wrought." By this he means the ruination of the whole planet, which I thought was more his and Galactus's fault rather than Mephisto's, but this does lead to quite a nice ending, with Shalla Bal wandering around with flowers growing wherever she walks. 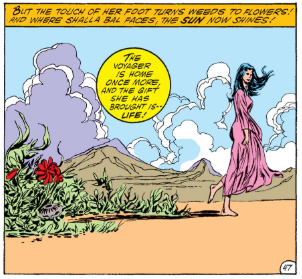 It's a good finish for a fairly daft comic which I think I might have been a bit hard on back in the day. Still, there's no need to worry, as we'll soon back in that much-loved (by me) run of John Byrne's as we start the build-up to Doom's latest return from the dead. However, before we do that, we're going to take some time to look at the results of my Doctor Doom Survey, starting next week!