Back in April I used this blog to conduct an online survey, designed to try and discover what makes Doctor Doom Doctor Doom. It went much better than I expected (I was hoping for about 50 responses, but by the end of the survey period I had had 225 completed surveys returned) which is why it's taken so long to sort out the results, but for the next couple of weeks I'm finaly going to be sharing them with you here.

I'm going to start with the analysis for section five of the survey, "Your Experience Of Doctor Doom". It makes sense to start here, rather than in the order the questions were actually asked, because this section gives a lot of insight into the background knowledge of those taking part, which in turn sheds light on some of the results themselves.

For all answers, I'll give the question in bold and then go through the results, as follows:

Media types: In which of the following media have you experienced Doctor Doom stories?

Respondents were asked to answer "Yes", "No" or "Don't know" to this question to indicate which types of media types they had experienced Doctor Doom in.

If the respondent answered "Yes" to "Other" they were asked which other media they had seen featuring Doctor Doom. The answers were as follows:

By adding the top answers here to the main table the following graph was produced. 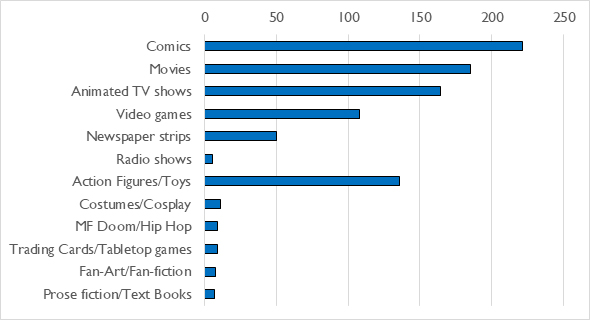 Comics came out clearly on top, although movies and animated TV shows were not far behind. This was to be expected, as most of the respondents were recruited via comics-related groups, but I did not expect Action Figures/Toys to be such a popular response. As will be seen throughout this analysis, respondents regularly gave answers that I would not have considered important, or included at all, if the survey had not been run - a great justification for actually doing it!

Comics: How familiar are you with comics from each of the following decades?

The next questions were only asked for people who had answered "Yes" or "Not sure" to the question "Comics" at the start of the section. Results were as follows:

By recoding scores 1 and 2 as "Not familiar", 3 as "Neither" and 4 and 5 as "Familiar" the following graph was produced. 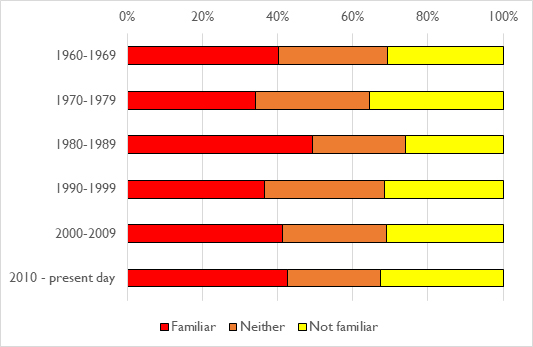 This shows that awareness of Doctor Doom's appearances was fairly evenly spread across time, with a slight bias towards the 1980s, which could be accounted for by his leading appearance in "Marvel Superheroes Secret Wars" during this period. This might also explain why so many people thought of Doom appearing as an action figure, as this was the commercial driving force behind the creation of the "Secret Wars" series.

Comics series: Which comics series are you aware of Doctor Doom appearing in?

This was only asked for people who answer 'Yes' or 'Not sure' to the previous question.

Predictably, "Fantastic Four" and "Marvel Superheroes Secret Wars" were the most popular answers here, although it was intriguing to find "What If?" appearing so high in the list. This is not a series that I personally would associate particularly with Doom, even though I know he did appear in it several times.

One important thing to note here is how many people were aware of Doom's appearances in "Unbeatable Squirrel Girl". This is likely, in part at least, to be due to so many respondents finding out about the survey via Ryan North's retweet of the call for participation. As will be seen as the analysis continues, this would lead to some skewing of other results.

If the respondent answered "Yes" to "Other" they were asked which other series they had seen featuring Doctor Doom. The top answers were as follows:

It's notable here that so many people mentioned Doom's appearance in "Luke Cage: Hero For Hire", a series which he only appeared in for two issues but which did generate a popular internet meme. 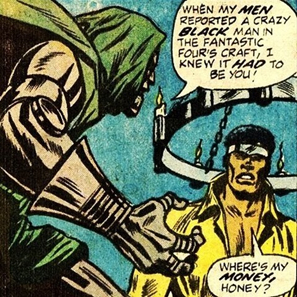 
There were also another 66 separate series mentioned for this question, all with three or less responses, demonstrating how widely Doom has travelled throughout the Marvel Universe.

I think that's enough for today - hopefully it's been of some interest. Join us next time when we'll be looking at responses for movies, animated series and video games!