Today we're continuing our look our survey respondents thought makes Doctor Doom Doctor Doom, this time in terms of behaviour and dialogue. Here's the questions asked, and what people said:

This category had a massive 83 different answers which were given by more than one respondent, with another 150 unique replies! For the sake of brevity, therefore, only the behaviours mentioned by 10 or more respondents are included here.


This was a huge response, but (luckily for me and my attempts to analyse it) this sort of complexity is not unique to this survey, and is in fact a longstanding problem for the psychological analysis of personality traits. This goes back to at least 1936 when Allport & Odbert initially identified 18,000 words to describe personalities in "Trait names: A psycholexical study". Since then many theories have been put forward about how to address this issue, with the most widely used currently being "The Big Five", a system for grouping together personality traits into five broad dimensions to describe human personality: openness to experience, conscientiousness, extraversion, agreeableness and neuroticism.

It's possible that I'll be able to use some aspects of this codification scheme when I move onto the next stage of this project, which will be using the responses to create a tool for analysing the comics themselves. However, it will not form the basis of the tool itself - certain specific aspects of Doom's personality, such as his obsessions with Reed Richards and his mother, need to be recorded as specific details, rather than in the more general terms of this psychological tool.

For the moment, however, it is clear that Doom's characteristics are broadly centred around his arrogance, desire for power, and the twin obsessions mentioned above.

This question had far fewer different responses than Behaviours, in large part because lots of respondents difficult to think what Doom's dialogue might consist of - the phrase "Can't think of any specific (catch)phrases" or similar came up so often that it was included as a category of its own. Also, as can be seen below, there were several popular answers which referred to a general way of speaking rather than specific phrases.


The presence of "Confound these squirrels!" (and variations thereof) shows yet again the influence of Ryan North's followers on the survey! 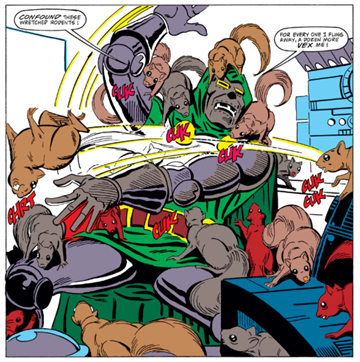 Doom in "The Coming Of Squirrel Girl" from Marvel Superheroes #8


As I write this blog I'm just starting on the process of collecting Doom's dialogue from the actual texts, and I must say that this list is pretty accurate, especially "Bah!" which seems to come up in almost every example. He also speaks in the third person and says his own name a lot, and although so far he hasn't said "Doctor Doom does/toots as he pleases", the specific issue is that they internet meme comes from is in the sample!

Next time we're moving on to look at Doom's world, where we'll see some more of the influence of Squirrel Girl, and a lot more chances for comic fans to prove how much they know!