With the survey results FULLY examined it's time to get week back to the actual texts today, with a rather wonderful John Byrne issue of the FF which sees him very gently preparing for one of the greatest (in my opinion!) Doctor Doom stories... ever!

Most of the story here follows on from the previous issue, in which the FF finally managed to defeat Galactus, with Reed Richard now deciding that they have a duty to save him. This will lead to huge ramifications for the team later on, but for now the big change caused by it comes when Frankie Raye, the new female version of the Human Torch, volunteers to be Galactus's herald in exchange for him vowing not to eat the Earth. 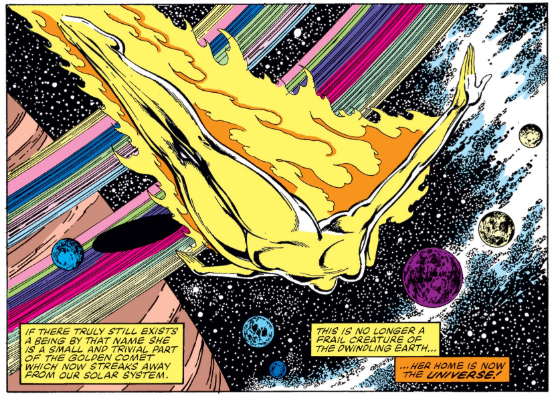 The Doctor Doom subplot appears right at the end of the issue, as part of "Prolog One", which seems an odd thing (and an odd spelling) to have at the end of a story. It starts off with Reed Richards finally buying the Baxter Building from their landlord, and then remembering that they've got Doctor Doom stored in one of their labs. 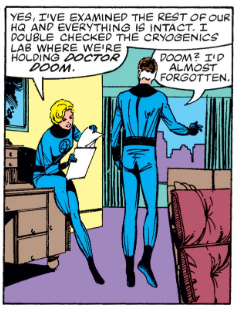 This seems an odd thing to forget about, but anyway, he rings the Latverian embassy and speaks to Ambassador Leopold. "What's that?" the diplomat says. "You say you are holding our former monarch, and want to know what we wish you to do?" He seems very calm about such an unusual telephonic opening gambit, but I suppose that when you're the ambassador for Latveria you get used to that sort of thing.

Reed explains that Doom is "locked into a suspended animation field. No, it was an accident - his own", and Leopold agrees to take delivery of Doom's body on Thursday. It's all massively pedestiran until we get to the final panel on the page when it's revealed that Doom himself has been there all along! 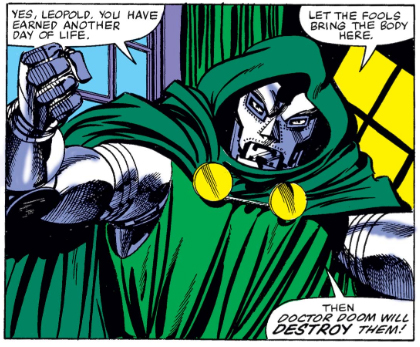 What the?!? How is this even possible? I for one can definitely not think of any way that Doctor Doom could be in two places at once, so I guess we'll just have to wait until the next time we're back in "The Fantastic Four" to find out what possible explanation there can be!