What If Doctor Doom Had A Sense Of Humour?

Long-term readers of this blog will know that there's one type of Marvel Comic I enjoy more than any other, and that is of course the Marvel Humour Comic. Oh! The wonderful hours I have spent chortling away at the hysterical possibilities of Marvel characters being played for laughs, and Oh! the number of times I have had to go to A&E to have my very SIDES sewn up again as a result.

Aha! I was joking! For LO! when Marvel attempts to do humour, from Not Brand Echh to The Fantastic Four Roast it is about as funny as a slap in the face with a wet sock. So, you can understand my trepidation when I started reading this issue and found that all the usual suspects were present, including the Watcher being a twit, Fred Hembeck's heavily involved, there are single-panel puns and,of course, the never-ending hilarious possibilities of Aunt May being a superhero. 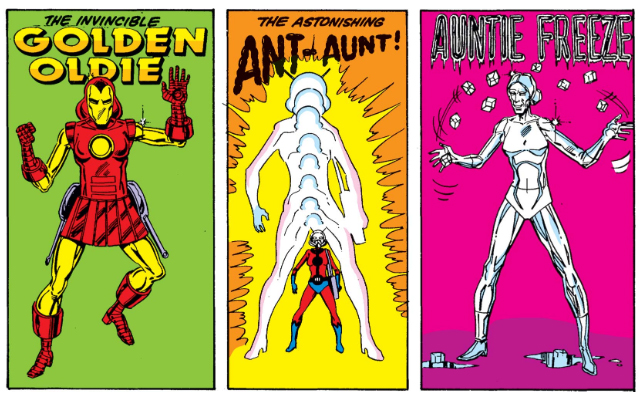 One thing that never seems to change, throughout this period of Marvel, is the fact that they think there's something inherently funny about Aunt May. There really isn't!

However, my general grumpiness at the prospect of reading this was thrown off balance when I came across a page I remembered very well indeed, from when it was reprinted in Marvel UK's "The Daredevils" series. At the time it was home to Alan Moore and Alan Davis's "Captain Britain" series, and I distinctly remember it featuring the short gag strip called "What If Daredevil were deaf instead of blind?" At the time I thought it had been written by Alan Moore, which was an easy mistake to make as most of the rest of the comic was!

I have to admit, that joke did make me smile all these years later, and it almost makes up for "jokes" such as "What If Luke Cage had found the hammer of Thor?" (he would say "by the gleamin' gates of funky Asgard"...) and "What If Iron Man had an eating problem instead of a drinking problem ". 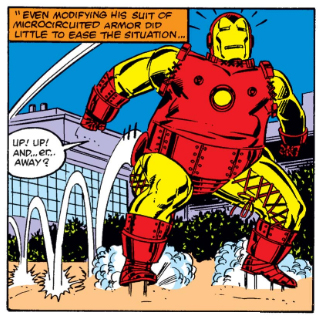 Doctor Doom appears twice in this comic. The first is on the cover, where he's pictured wearing a mask and stethoscope because - HO HO! - he is a Doctor!!! 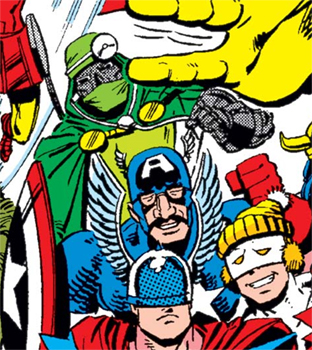 The second is right at the end, when we have a one-panel gag "What if Dr. Doom had a sense of humor?" 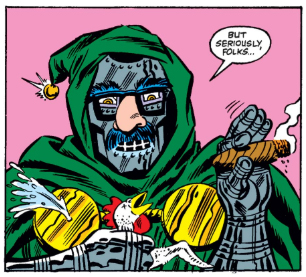 It's a load of old rubbish, but it's (almost) interesting to note that, fifteen years after his appearances in Brand Ecch, there's still an assumption that Doctor Doom's po-faced villainy is so well-accepted that placing him in any other situation is a surefire route to comedy gold.

Thankfully, for me at least, this is the last time we'll have to look at Marvel's full-on attempts at a humour comic, although there are still plenty of jokes to come!