It feels like a long time since we last looked at an episode of "Spider-man And His Amazing Friends", the slightly dopey, sitcom-esque sibling to the plainly-titled (but much more exciting) "Spider-man" cartoon of the early 1980s. Doctor Doom played a major part in the latter, so it's a shame that that series only lasted for a single season, while "Spider-man and his Amazing Friends" went for three whole years.

As I said last time we looked at this show, I remember it as being a bit daft and rubbish, and this episode very much reaffirms that opinion. Spider-man, Firestar and Iceman seem to spend most of the episode in their civilian identities, in this case going to the beach (where they scare off a shark), popping to the pictures and then going to the zoo. In the midst of this is a storyline in which The Sandman learns Peter Parker's secret identity, so Firestar enlists the help of Flash Thompson to do the old "Peter stands next to someone in a Spider-man costume" trick to throw the villain of the scent. 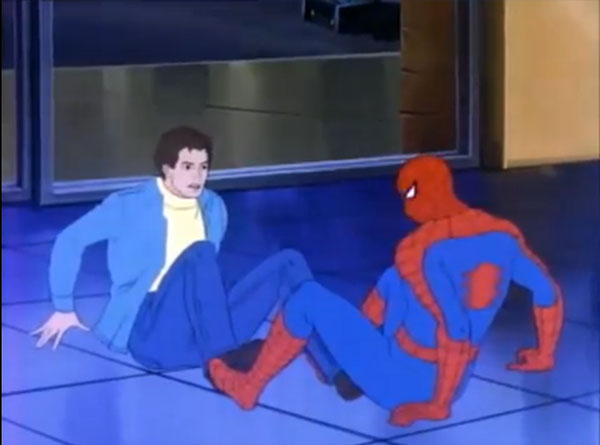 "Parker? And Spider-man? Together?" says The Sandman, and that's that sorted. 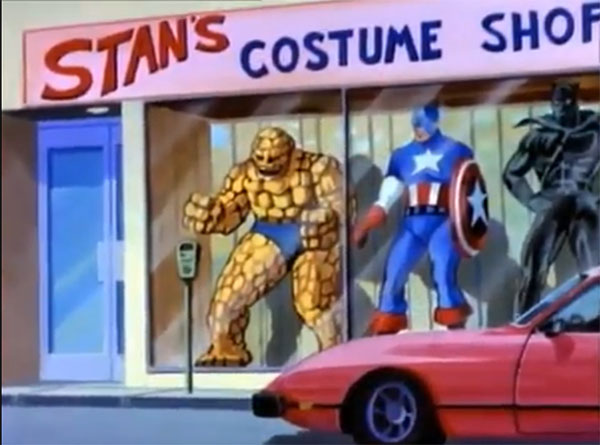 It's interesting that they've got a The Thing costume in the window - I would have guessed that rights issues would have meant that the Fantastic Four couldn't appear in this series, but then again the presence of Doom here indicates that they might? Either way, there's a Doctor Doom costume on display alongside a very much Of The Time range of superheroes, including Elektra and Dazzler. 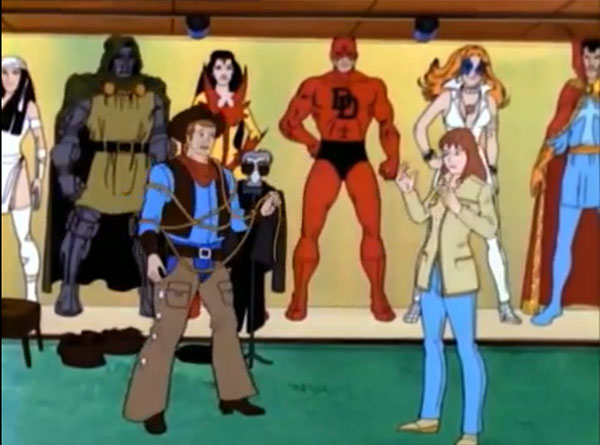 The Doom costume isn't mentioned and isn't really relevant to the story, although it is identical to the one seen in the title sequence, where Doom appears as the grand finale to the titles for each episode, despite only appearing in the actual show twice. 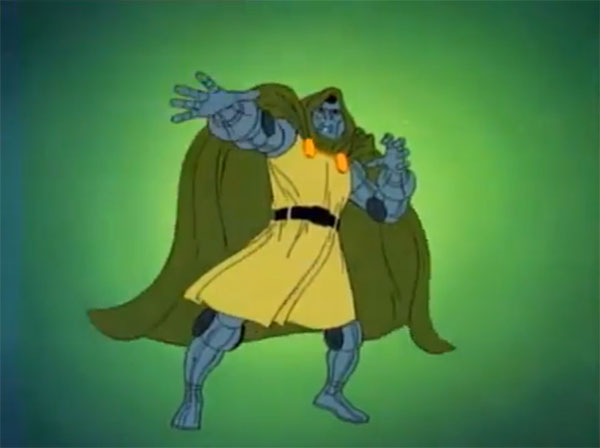 This highlighting of Doom, along with his presence in this episode alongside other leading characters (or, in the case of Dazzler, characters Marvel wanted to promote) demonstrates yet again that he's viewed as one of the major assets in the Marvel universe. I just wish that meant he'd been more a part of the actual show, especially as this is the last cartoon we'll be looking at in this corpus.

Next time, however, we're back to looking at Doom in the main Marvel Universe, in an actual comics - and a great comic too!