This Land Is Mine!

This is one of my all-time favourite comics stories EVER. I remember being amazed by it when it came out, re-reading it over and over, then being delighted to find it stood up many years later, in my original copy and then when I bought the trade paperback series of Byrne's run on Famtastic Four. In recent years I've been excited all over again to find that it's full of wrinkles and subtleties that I'd not noiced before, and have talked about it at conferences and included it in a paper about Marvel during the Cold War. It is, to put it in non-academic terms, a bloody brilliant comic!

The story itself starts with a huge splash page of Doom yelling the title. 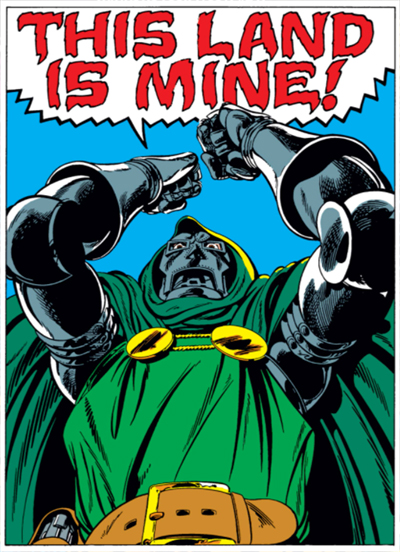 Here on the first pages the reader may take this to be Doom doing his usual cry of megalomania, but then when we turn over to the doube-page spread overleaf we find that he's actually explaining what's gone wrong in the ruined Latveria that we saw at the end of the previous issue. He tells the Fantastic Four that the runined nation around them is all because of their interference back in Fantastic Four #200, when they helped Prince Zorba take over the country. Under Doom, Latveria was stable and prosperous, but under Zorba it has fallen apart. The men of the FF refuse to believe this, with only Sue prepared to consider that he might be right. 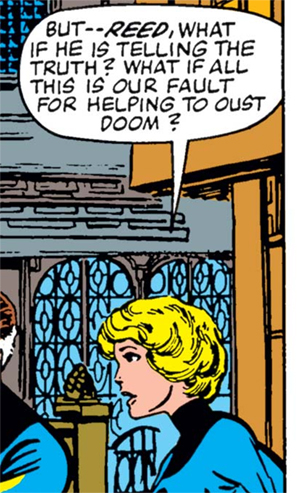 To twelve-year-old me, this was utterly mind-blowing - could Doom ruling a county actually be a Good Thing? To slightly-more-than-twelve-year-old me, this is a fascinating way of analysing then-current American foreign policy, which stated that sometimes it was better to have dictators in charge of a country than run the risk of it collapsing and becoming a rogue state. Actually, it could be argued that that's still the foreign policy for many Western Governments. Here John Byrne seems to be testing this to the limits - if the US government was prepared to keep Gadaffi in charge of a state in order to maintain stability, shouldn't that logic also mean that Doctor Doom should retain control of Latveria?

Doom's declaration of himself as a responsible ruler is tested right away when a small boy called Kristoff runs out and collides with him. Doom reacts angrily and the child's mother rushes out to beg for his life, just as you might expect from a civilian meeting a super-villain. However, the whole situation twists when she realises that it's not Zorba's secret police, as she'd thought, but "The Master".

"Holy cow! She... she's glad to see him!" says the Human Torch, as the FF stand amazed at this turn of events. Kristoff's mum confirms Doom's story, that he was a beloved and competent ruler, and Byrne rather brilliantly illustrates it with a direct quote from Doom's origin story. 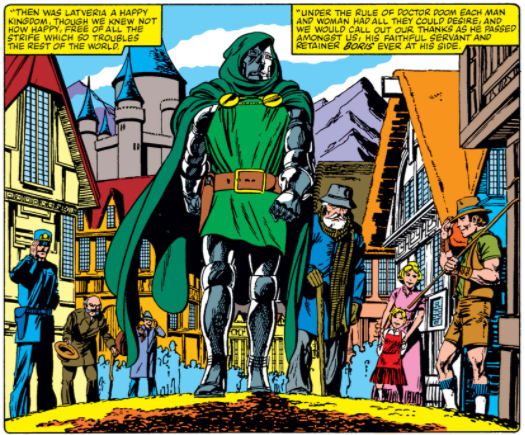 I only noticed that Byrne's image is a near-copy of Kirby's (drawn from a different angle) because I happened to read the two comics close together while preparing my PhD corpus, and the fact that it took me several decades to realise leads me to think Byrne might be doing this partly for his own amusement. It's clearly an intentional nod to the original, as so many of the characters are in the same positions, and it's definitely part of a trend in this issue for Byrne to quote previous stories in order to affirm that this is all part of the Doom that we know, but this particular homage feels more like an Easter Egg.

Kristoff's mum's story illustrates tells us that without the iron fist of Doom over them, the people of Latveria very quickly turned to lawlessness. 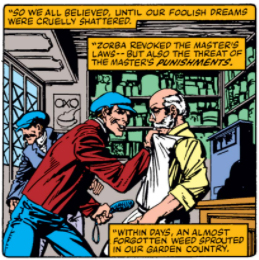 Byrne - or the American imperialist/exceptionalist foreign policy he's examining here - seem to be saying that democracy is all well and good for US citizens, but that other nations are not grown-up enough to cope with it, agnd need to be ruled firmly to stop them getting into trouble.

Doom's version of events is finally proven beyond doubt when some re-purposed Doombots appear and kill Kristoff's mum in cold blood. Doom reacts angrily and launches into battle to avenge her death, and the FF find themselves backing him up and, without really noticing, taking orders from him. 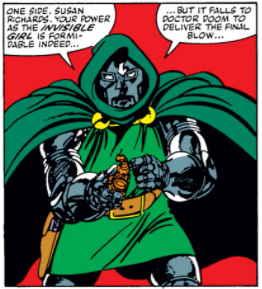 Once the robots are defeated Latverians come out of hiding and gratefully welcome Doom back, before leading him and the FF into a nearby pub, which The Thing recognises as a former base for the Latverian resistance. Again, this shows that everything we thought we knew has been flipped over, with Doom now cast as the plucky resistance fighter, while Zorba is the evil dictator.

This is illustrated further by a trip into Zorba's headquarters, where we find him angrily decrying the stupidity of the Latverian people to his SS-like deputy, while a torture victim is dragged away. 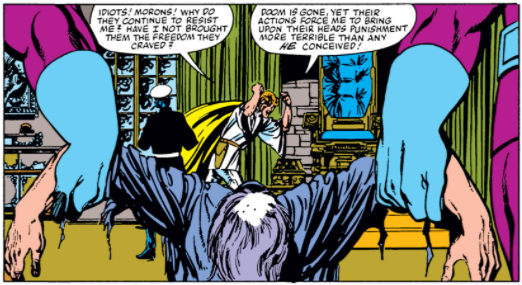 Zorba decides he's had enough of their ingratitude and unleashes weapons of mass destruction on his own people. Despite all the politics, howver, this is still a superhero comic, so that WMDs turn out to be Killer Robots. 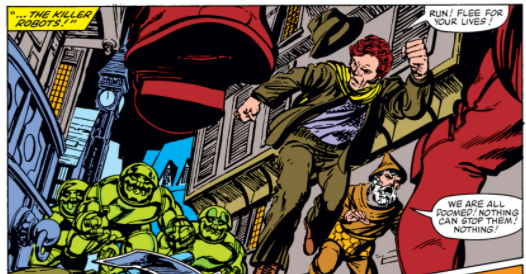 This is yet another continuity nod by Byrne, as these are the very same Killer Robots that we saw Doom himself unleashing on an unsuspecting populace back in Fantastic Four #85. Zorba's transformation into Doctor Doom is continuing.

Battle commences, with Doom once again directing tactics, much to the consternation of Sue. 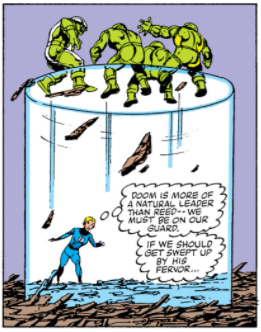 She's right to be concerned, as while they're dealing with the robots Doom makes his way to the castle. Here he rescuea his old friend Boris from the dungeons, then moves on to confronting Zorba, who reacts with an extremely telling remark. 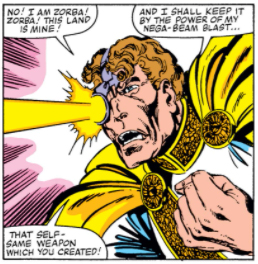 "This land is mine". OOF! I'd read this comic about twenty times over the years, but it was only recently that I realised exactly what was happening here. Zorba repeats Doom's statement at the very start of the story, signalling his complete transformation into the villain. Doom wastes very little time in dealing with his enemy, dangling him over a battlement where Zorba makes perhaps one of the most stupid statements ever. 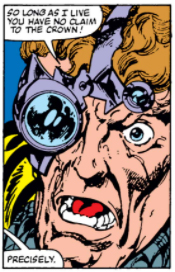 We don't see what happens next, but we find out on the next, and final, page. 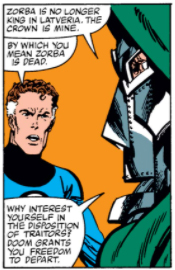 What is so great, to me, about this, is that there's no attempt to redeem Doom. He is, as he has always been, a murderous dictator who will let nothing stand in his way. Doom himself remains exactly as he has always been, only our view of him has changed over the course of this one issue. The story ends, as they usually do when Doom forms an alliance with anybody, with him declaring that he will let the FF leave, but that he will do his very best to destroy them when they next meet.

As I said at the start, when I first read this story I found it mind-blowing and exciting, and I still do for slightly different, or actually maybe just additional, reasons. John Byrne stays true to the character of Doctor Doom and brings in so much continuity that we can be in no doubt that he's the same individual we've always known, and then uses this to make us question our views on government and a people's right to liberty. The answers Byrne propose are not particularly palatable, perhaps, but the way he does it is supremely skilful.

It's a great use of character coherence in a long-standing storyworld to cast new light on its inhabitants, and our world too, and that's part of the reason I love it so much. The fact that Byrne's art look so great doesn't hurt either!