After all the excitement of the last two instalments, which were packed FULL of Doctor Doom, we now get back into a run of comics where he just pops up in flashbacks or other very brief cameos. This seems to happen an awful lot for Doctor Doom, and it makes me wonder whether this is just the case for him, or whether it happens for other characters do it too? I'd imagine that a character with their own regular series, like Hulk or Spider-man, would be the main lead in most cases - at least compared to how many times they appear in flashbacks or cameos, but it would be interesting to find out.

That, however, is a job for the far future, or hopefully even for someone else! For today we're looking at with this rather odd story in which Mephisto devises one of his usual extremely convulted plans, this time with the intent of harassing Thor. It all starts with Mephisto sitting in Hell, watching Thor's alter-ego Don Blake recruiting a patient to be his new secretary.

Now, maybe it's just me being even more mephistophelean than Mephisto, but surely knowing Thor's secret identity would provide much more useful ways to destroy his life than whatever crazy plan gets cooked up in the rest of the story? The bright red lord of hades doesn't seem to think so, and instead enacts a crazy plan which involves resurrecting Darkoth The Death Demon and sending him in for a punch-up. Darkoth doesn't want to do this because, apart from anything else, he's a good guy with nothing against Thor. He's also upset because Mephisto has somehow managed to steal him from heaven in what must surely be an appalling administrative cock-up by the forces of good. 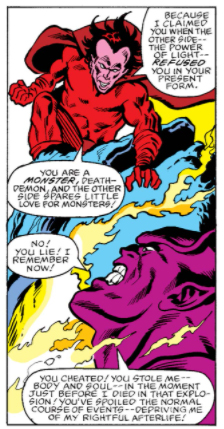 It's here that Doom appears, in a recap of Darkoth's origin story. 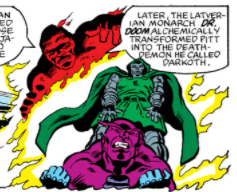 The rest of the story is sadly Doom-free. Darkoth is sent to fight Thor in exchange for the safety of his son, but can't bring himself to do it. Mephisto uses Special Hell Magic to force him to be evil but Darkoth fights back and eventually begs Thor to kill him again so he can properly die this time and go to heaven. Thor agrees, reluctantly, and the whole tale is wrapped up by Thor reverting to Don Blake and offering Darkoth's child to his new secretary to adopt. 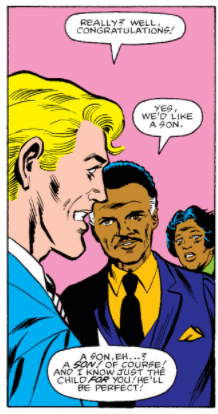 I'm pretty sure that that's not how adoption works, is it? Two quick other things about this story: firstly, somebody (possibly George Roussos, the colorist) seems to have realised that they can use colour without outlines, as the whole comic is full of images where a pink wash is used to denote memories or incursions from other realms. 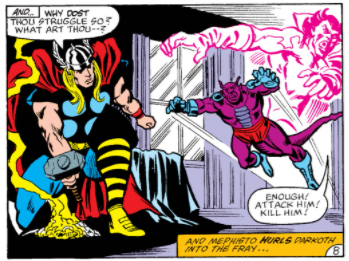 Secondly, Doug Moench and/or Allan Kupperberg have a surprisingly literal view of how you get from Hell back up to Earth! 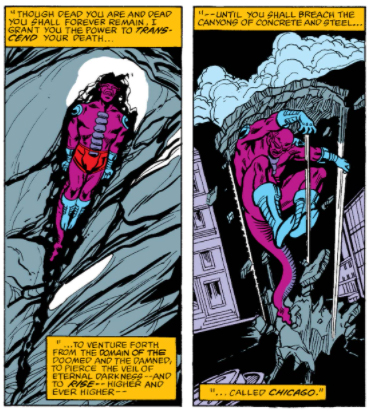 And that's the lot for this one I'm afraid. Come back next time when Doom will get a whole page to himself in a cameo in "Dr Strange" that will have long-lasting reverberations!