This story is advertised on the splash page as "a truly offbeat adventure of The Thing", and it sort of is... though as we'll see it also harks back to an early classic from the Marvel Universe.

It's called "offbeat" because The Thing himself spends the entire issue sitting in bed in hospital, recovering from various thumpings he's had in recent issues of The Fantastic Four and his own title. He'd rather be at home, but according to Mr Fantastic he's better off here, in a totally normal hospital, rather than in the super-duper futuristic science centre at The Baxter Building. 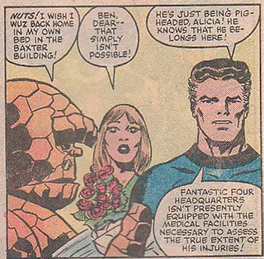 Can that really be right? I'm pretty sure I've seen some medical gizmoes at the FF's base, so maybe Reed Richards has run out of plasters or something? Quite apart from that not making sense, the other big issue is that this really is just a hospital, without the defences available at The Baxter Building. 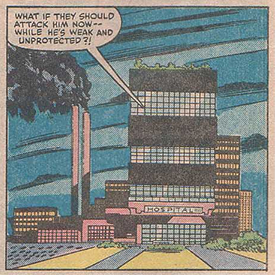 It's a bit of a daft set-up, but it does lead into a very enjoyable story which sees pretty much the entire Marvel Universe of the time being called up to protect the Thing from all the super-villains who've found out that he's vulnerable. It reminded me of "The Wedding Of Reed Richards And Sue Storm" in Fantastic Four Annual #3. 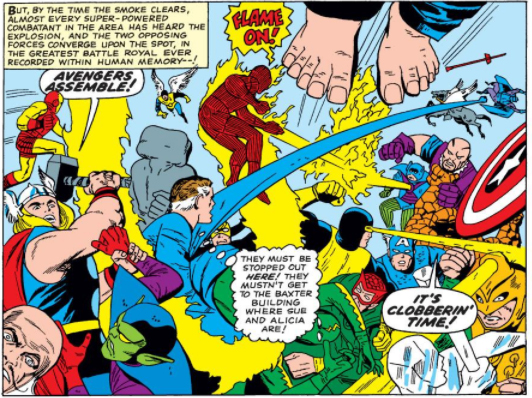 To my enormous delight, the half-page appearance by Doctor Doom seems to confirm that this was intentional, when we see him reading about the news of The Things's hospitalisation in the pages of The Daily Bugle. 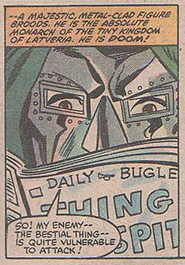 This is a direct echo of the way that Doom learnt about Reed and Sue's wedding all those years ago - so long ago, in fact, that it was before he took out his Daily Bugle subscription! 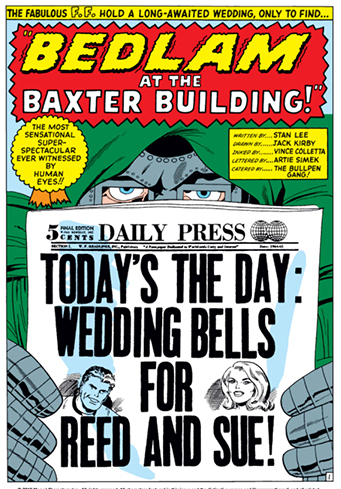 Then, as now, he takes out his frustration on the newspaper itself, although in the intervening years we can see that Doom's character has changed. Back in the 1960s he was happy to attack his foes when they were vulnerable, whereas now he feels that this would be beneath him. 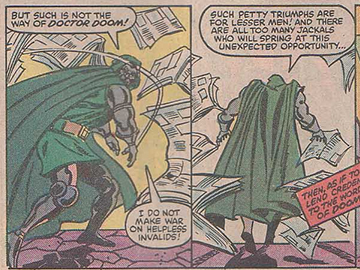 It's a lovely, rather subtle, use of quotation which would be likely to pass most people by - it's only today, reading the comic for the third or fourth time, that I noticed it myself! It also demonstrates how Doom's portrayal has changed since then, or perhaps solidified. During the Lee and Kirby run on Fantastic Four he started out as a villain, became a sort of tragic hero, and then regressed back into being a villain again as an Eastern European dictator towards the end, while simultaneously being portrayed much more sympathetically by other creators in other titles. Now, led by John Byrne's version in The Fantastic Four, he is solidly depicted as a man of honour who will not kick his enemy while he's down.

Doom might not want to do that, but plenty of others will have a go, and the story reaches a climax with a mass brawl between superheroes and villains. It's a nice illustration of who the main characters of the Marvel Universe were considered to be in 1983, compared to the ones we saw twenty-ish years earlier. 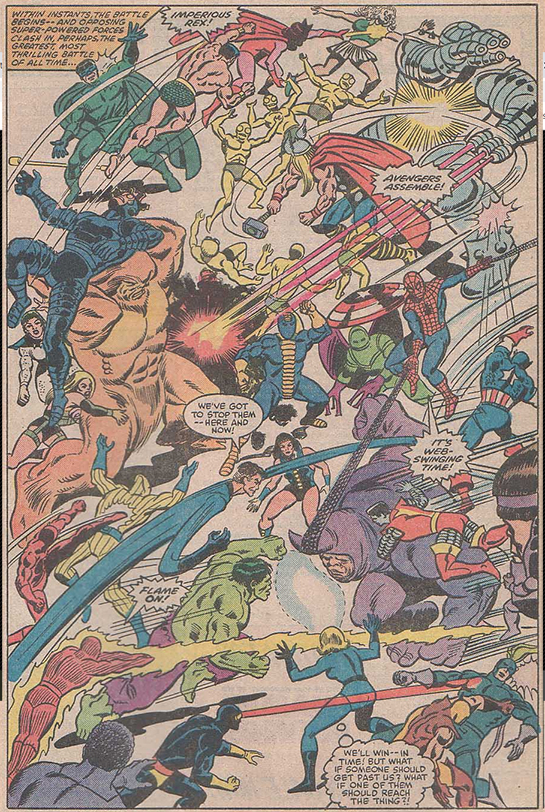 The comic itself ends with a much quieter scene, as The Sandman sneaks in to thank The Thing for helping him get straight in an earlier issue. He's brought a couple of presents with him, and the issue closes with the pair of them enjoying a good old healthy dose of beer and cigars! 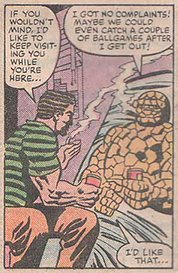 It's a sweet ending, if very very much of its time, for a jolly story that not only wears its continuity lightly, but also uses it to have a look at how much the Marvel Universe has changed. More of this sort of thing please!