When I first started buying US Marvel comics, back in the 1980s, it was pretty much impossible to buy consecutive issues of any series. Around the middle of the decade I discovered the stall on Peterborough market (that would later become "The House On The Borderland" shop ) which sold all the American comics, but before then it was a case of wandering round different newsagents seeing which random issues they'd been given that month.

Desperation often lead to me spending my pocket money on whatever comics were available, and sometimes this would involve issues of Roger Stern's run on The Avengers which, like this one, were so heavily entwined with continuity they were almost impossible to follow. The first few pages of this story tell interweaving stories of the daily life of the team's various members, some of which are only told within this series (such as She-Hulk's relationship with the never not creepy Starfox) and others which go back and forth between the solo series of characters like Iron Man, Thor and Captain America. It's a breezy, very soap opera-like way of storytelling but it was extremely confusing if you lived in Peterborough and weren't able to tune into most of the other episodes!

Doctor Doom appears in the second half of the comic, which is almost entirely taken up with a re-telling of the Scarlet Witch's life story. Doom's job, as it so often seems to be, is to represent All Supervillains in a single panel which covers most of The Scarlet Witch's early adventures with the team - despite the fact that many other villains appeared much more often. 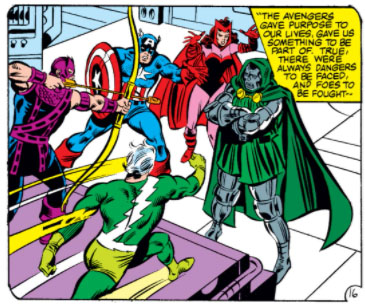 The overall story rolls along and then comes to a sudden halt with a non-cliffhanger ending where Doctor Strange shows up in Astral Projection form and... that's it! 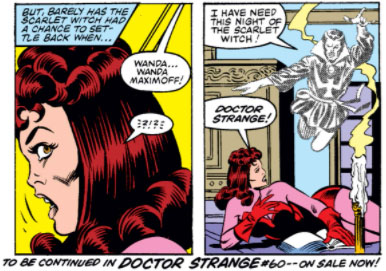 It's very much in keeping with the style of the entire issue, which clearly sees itself very much as a single piece in a much bigger jigsaw, rather than a stand-alone story. As we'll see soon, Roger Stern would collaborate with John Byrne later on aspects of this that had much more interesting results, but here it all feels a bit unsatisfactory, as you need to buy several other comics to get any idea what's going on in this one!

Next time we've got one more single panel appearance to go before we get a whole issue full of Doom. See you then for "The World According to... Faustus!"