After all the excitement of the recent John Byrne trilogy, today we're looking at an extremely minor appearance by Doctor Doom in a rather minor issue of Amazing Spider-Man. It doesn't have an awful lot to say, but is quite a sweet little story in which The Watcher invites us to look into the daydreams of the regular cast. In many ways if feels like a fill-in issue, except for the fact that it's clearly situated within the current run and is written and drawn by the regular creators, so it's really just a nice one-off, done-in-one story which delves deeper into the regular characters.

It's all a lot of fun, although I'm not quite sure why The Watcher has to get involved - as far as I'm aware he doesn't usually have anything to do with daydreams, and the storyline would work perfectly without him. Anyway, it starts with The Black Cat recuperating in hospital from events of previous issues, only to be interrupted by Spider-man. 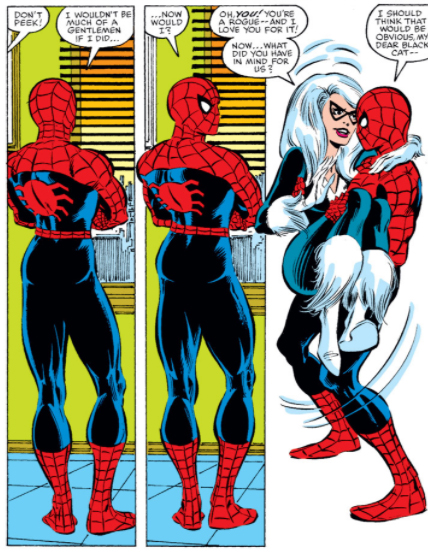 I really like the way that Spidey is a little bit "off" throughout, a lot more self-confident than usual - this is Black Cat's daydream version of him, and it's done in a way that is obvious without ever being pointed out in the text itself. The daydream sees him taking her out for an evening of high living, at the end of which he removes his mask and turns out to be... Cary Grant!

Next we get J Jonah Jameson dreaming about beating Spider-man once and for all, in a sequence that's notable for the delightful way in which his hair gets darker and more flowing as he gets happier.

Following on from that we see Mary Jane merrily imagining beating Meryl Streep to a job playing herself, with John Travolta as Spider-man and Woody Allen as Peter Parker. Interesting casting! 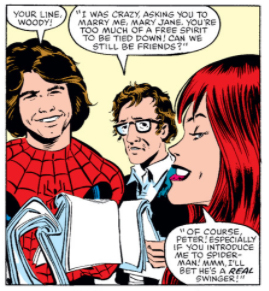 Doom appears in the last section, in which Spidey dream of saving Jonah from an attack by a whole bunch of super-villains, forcing Jameson to finally recognise him as a hero. 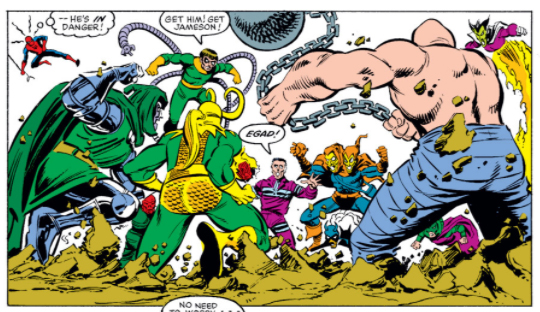 This appearance by Doom reminds me of the way he was used so often a decade or so earlier as a member of groups of super-villains, always placed prominenty in a scene to show that this grouping together was a big deal. There'll be a lot more of this when we get to "Secret Wars"! 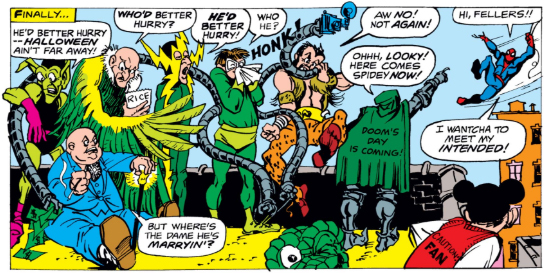 Spidey being Spidey he can, of course, never be happy for too long, even in a daydream. The Avengers and Fantastic Four are arguing over him, each wanting him to join their team, until suddenly they all realise at once that he's just some skinny kid and drop the whole idea. This neatly dovetails into real life when Spider-man spots an actual skinny kid being bullied, and leaps in to help. As he leaves the boy again the story finishes with one last bit of daydreaming.

It's a lovely ending to a sweet story that, as I say, doesn't have an awful lot to say about Doctor Doom, but even a Doctor Doom blog has to admit that, just occasionally, that's all right!