"Marvel Fanfare" was supposedly a showcase of the best that Marvel had to offer, but my memory of it was as a ragtag collection of bits and bobs that hadn't been used elsewhere. Admittedly that was probably because the only copies I ever saw were those which my local comic shop had picked up cheap (often due to being slightly damaged) and sold at half price. For those of us on dinner money budgets this was very appealing, though I remember always being disappointed by the contents, which never seemed to match the High Quality Baxter Paper they were printed on. This was one of the issues that I bought back then, and the fact that it does feature an unused inventory story about Black Widow might well be what gave me the impression that's all it was.

This was reinforced by the contents of "Unusu-Al Pin-Ups" a section of supposed "pin-ups" (in actuality unused covers or single images) which clearly states that at least some of the images contained were repurposed from elsewhere. 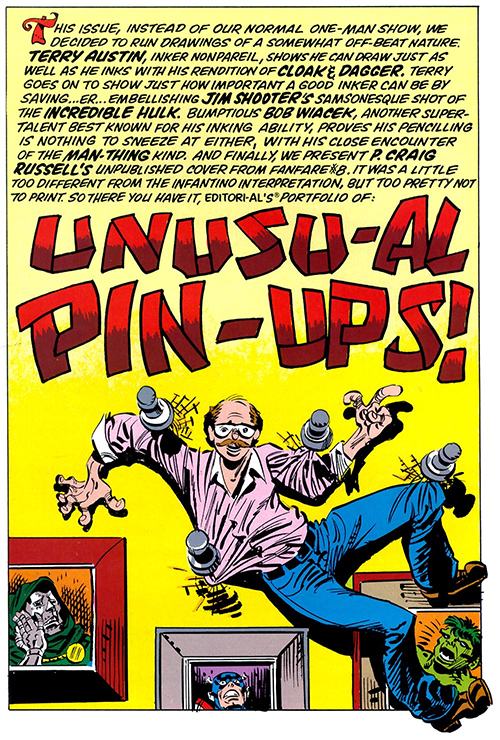 Doom's presence in this comic comes from here, with him above shown looking worried about editor Al Milgrom's predicament. It reminds me of all those other times when Doom has been used in "humorous" situations, with his usual status as Main Supervillain being very gently subverted by showing him expressing an emotion that one wouldn't normally expect to see - similar to the Hulk looking surprised elsewhere in the image. If nothing else it shows how consistent Doom's role has been in these sort of scenarios. All it really needs is a picture of Aunt May attacking someone to make it go full-on Not Brand Echh!