Another Doom flashback today in an issue which sees John Byrne (via the artwork of Ron Wilson and Hilary Barta) experimenting with form in a vaguely similar manner to his (in)famous issue of Alpha Flight where five pages took place in a snow storm, meaning that there were no pictures at all. This one's a little less cheeky, in that there are definitely characters, but as most of the issue takes place within the dark recesses of Ben Grimm's mind there are no backgrounds, only blackness. 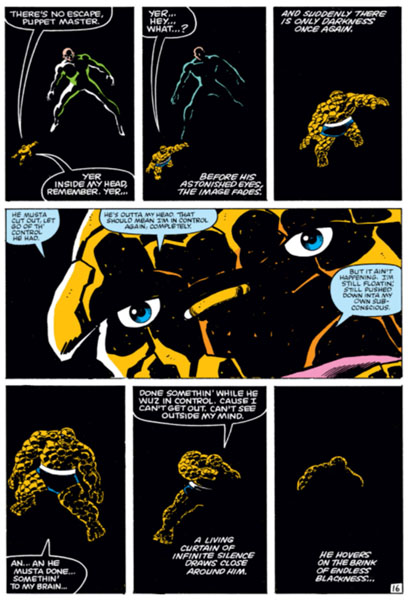 Wilson and Barta do fill out the panels with characters though, and the time saved on drawing backgrounds for most of the issue is clearly lavished on a double page spread towards the end which shows the true results of the battle which has filled most of the issue. 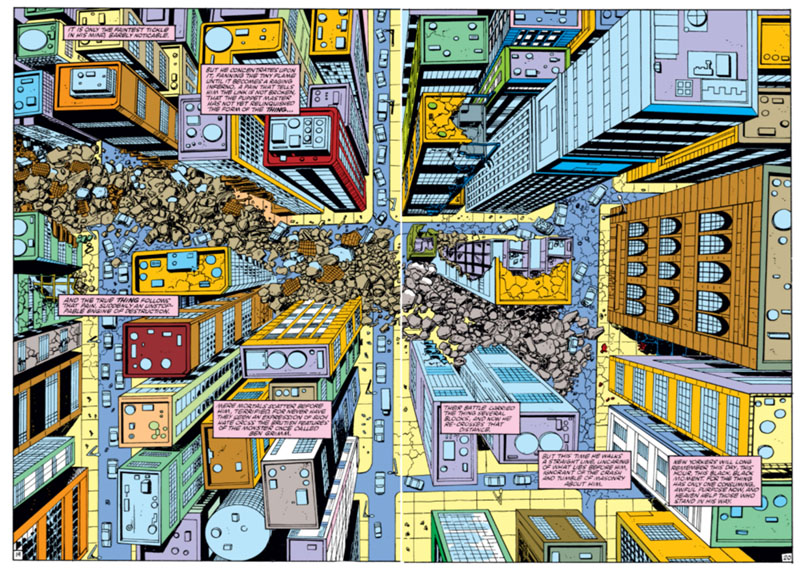 The story sees Ben Grimm trapped inside his own mind by The Puppet Master, who has developed new powers since we last saw him being crushed by Doom back in Fantastic Four #246. We get a recap of that issue, as well as aspects of Fantastic Four #236 and Micronauts #41, with Wilson redrawing/quoting some of the panels to fill in the story. 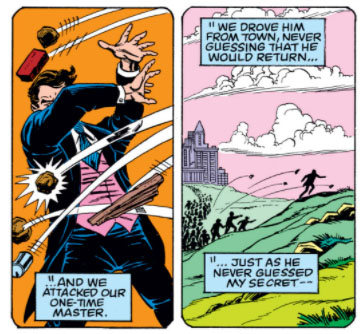 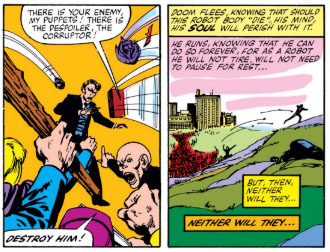 Doom has nothing more to do in this issue, but it's interesting how rooted in continuity and citation this story - and so many of the stories around this time - are. It's as if the creators (not just Byrne, but he he's definitely one of the main participants) are seeking to validate their own stories by including references to the past, proving that what they're creating is "real" and "counts" as part of the ongoing story. I'm not proud of it, but I must admit that I really like this, and miss it from more modern Marvel comics. Modern stories do still quote continuity, but they don't often include the editorial footnotes, which I think is a shame. When I was first reading comics I always found these very useful, as they told you whether or not something mentioned had already happened in another story, or was something new happening here for the first time. Actually, I still miss them and I wish they'd come back!

The actual plot of the issue sees The Puppet Master taunting Ben Grimm, who is stuck in his human form because his mind is the only place he can escape being The Thing. Eventually he is forced to transform and thus fully accept who he is, and, this being comics means, the psychological breakthrough manifests itself through lots of punching. 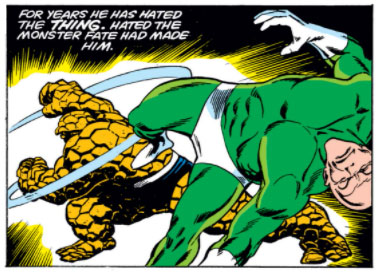 The Thing eventually escapes, and realises that he has been enacting the battle in the real world (as shown in the double page splash at the top). He goes to find the Puppet Master who is now living clay, taking on the form of whoever he controls. However, now that he has convinced The Thing to accept his own physical body he can now not change form himself and, under the strain... er... falls to pieces. 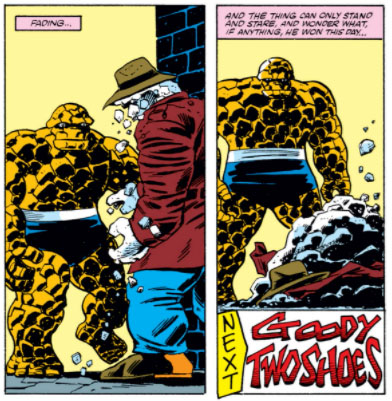 I'm not sure this is quite the masterstroke twist ending it's meant to be, but after such an enjoyable issue of psychology and punching I think we can let the creative team off. We're getting terrifyingly close to 'Secret Wars', where daft plots and ridiculous twists are going to be on the menu for weeks, so let's enjoy this while we can!