Ever since I began this blog I've been dreading this day, for LO! this is the day when I've had to sit down and read "Marvel Superheroes Secret Wars".

The dread came from my memories of reading it at the time, remembering it as absolute rubbish which was a trial to get through, although part of me wondered if maybe I was being unfair - after all, I was 13 years old when it first came out, and full of sneers for anything I judged to be mainstream. Maybe, just maybe, "Secret Wars" would turn out to be a lot better than I remembered?

SPOILERS: it is if anything even worse.

As I'm sure most people reading this will know, the" Secret Wars" series was set up as a tie-in with the Secret Wars range of toys, featuring action figures of various Marvel characters with vehicles and play sets. Even the name is a cynical attempt to maximise CA$H, as surveys had shown that the two words which most excited their target audience of young boys were "Secret" and "War". When Jim Shooter sat down to write the plot he decided to just write the thing that the fans asked for the most - all the characters gettig together and having a big fight - and to be fair to him, that is exactly what he did. There are loads of characters, and there are loads of fights!

It's all written by Shooter according to the rules he would go on to impose on other creators across Marvel, which he believed would lead to clear, easily understood stories that would excite their readers. One of these rules was that every character should be introduced, and this is done in the most blatant fashion within the first few pages, first by the goodies:

Each group of characters is in a seperate spaceship, heading for a place called "Battleworld", a planet made up from lots of bits of other planets. Doom watches Battleworld take form, while behind him characters continue to introduce themselves.

A fight breaks out (for no apparent reason) on the baddies' ship, and Doom tries to take command to stop it, but before he can take control everyone on both shops is silenced by Something Happening out in space. There's a bright light and then a mysterious voice says "I am from beyond! Slay your enemies and all you desire shall be yours!"

WHat has happened, basically, is that some Cosmic Being has got together two teams of toys... sorry, heroes and villains, and is about to bash them together in a Big Fight. It's such a blatant reflection of what the series has been designed to promote that it's cheekiness would be almost charming, if it wans't all written so ponderously. This series had been promoted as promising Big Changes for the Marvel Universe, after which of course Nothing Will Ever Be The Same Again, so it's all Very Serious with not much room for fun.

Galactus flies off to give The Beyonder (as he decides to call him) a piece of his mind, and Doctor Doom follows, but The Beyonder is having none of it. 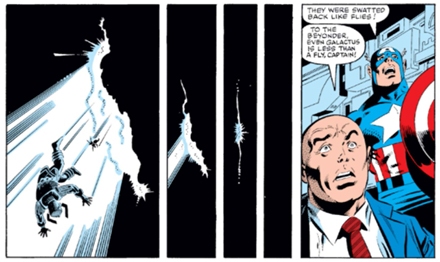 Meanwhile the superheroes are deposited on Battleworld, and after several pages of very dreary bickering about who's in charge they eventually nominate Captain America, because he is The Most American out of any of them. We then catch up with Doctor Doom, who wakes up next to a comatose Galactus and then heads off to look at a nearby fortress. Doom is very much a leading character in this issue, as he will be throughout the series, and this is reflected in the advertising for the toys too. 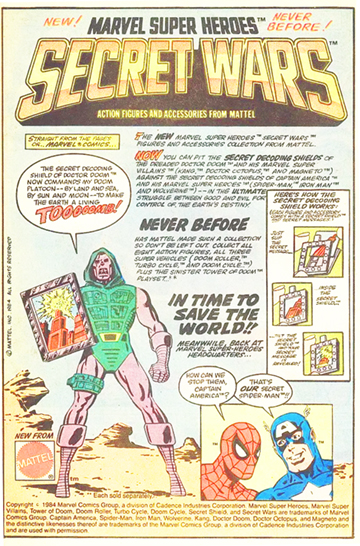 Inside the fortress he finds the supervillains gathered for more bickering. Jim Shooter sure does like to write people bickering! Again he tries to take control, and when they won't agree to him being the leader he behaves in a very Doom-like way by calling them all fools and zapping them with his gauntlet blasters.

He pinches a ship and flies off in a huff to talk to Reed Richards, reasoning that they can only get out of this if their two great brains can work together. Kang The Conqueror doesn't like this so zaps him with a handy laser gun, causing his ship to crash. The heroes rush out to help, and Doom takes exception to their offer of charity and zaps them all. 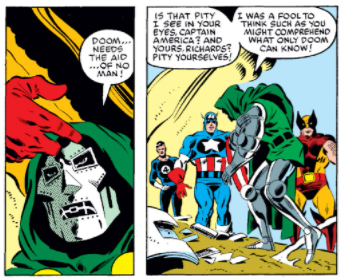 Just to recap the plot, what's happened there is that Doom has gone off to ask the superheroes for help, but then takes enormous offence when the superheroes... offer to help him? It's deeply stupid, but before we can try and unravel what's going on Doom flies off and the other supervillains turn up (having got there... somehow?) with a promise of a Big Fight for next time. 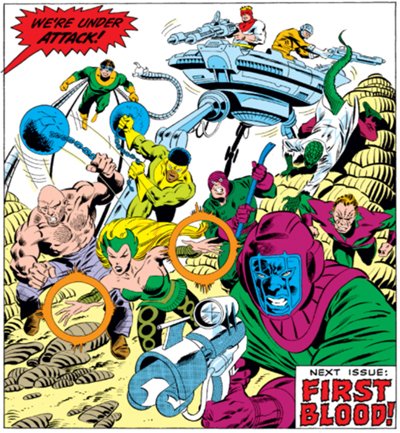 As I say, it's a right load of old rubbish, but thankfully there's only...um... eleven issues of it left to get through. That'll have to wait a while though, as next time we jump sideways and, in many ways, ahead to see what's going on back in the rest of the Marvel Universe!