In All The Gathering Gloom

Welcome back for what I think (and sort of hope!) is going to be the final year for the Marvel Age Doom blog... at least as far as bi-weekly reviews of texts goes anyway.

We kick off with a slight change to the previously advertised programme. Last time I said we'd be starting the year with a look at the main Secret Wars series, but after that cliffhanger on Battleworld I felt that we just had to carry on with "The Thing" before we did anything else. Also, it's too soon in the year to face actually reading more of "Secret Wars" yet!

So, if you can cast your mind back you'll recall that we left Ben Grimm, Tarianna and Hanrak as they stumbled into what looked like Doctor Doom's castle. As they get closer we find out that it's actually a town populated by Tarianna's people, who get a detailed description from her of what happened last time. They're a bit dubious about Ben being a super warrior, but they decided to take her word for it. Once that's done we get a further recap of the history of the town and the people who live there, which Ben later self-monologues is "like something out of a role playin' game." 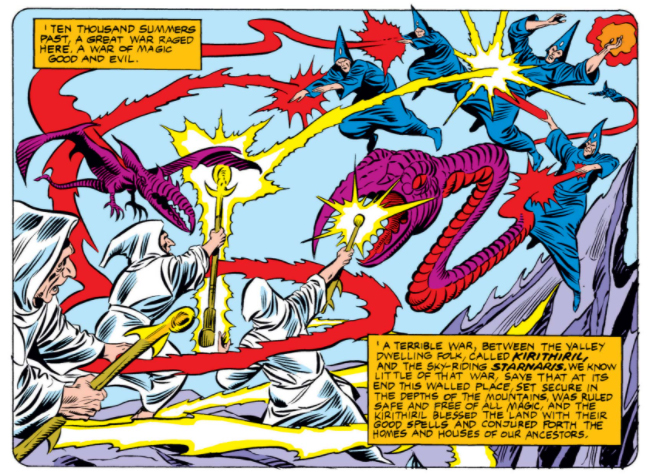 I like the way that Byrne, Wilson and Sinnott play with this idea that something's not quite right here, making everything look deliberately wonky and odd, with Latveria mixed up with people from "a Hagar the Horrible Convention" and a convoluted backstory that, we are told, cannot be true because Battleworld has only actually existed for a few weeks.

The Thing decides to investigate, heading into The Mysterious Keep at the centre of the town. Tarianna follows, and then an ashamed and belittled Hanrak follows her in turn, and they end up inside A Spooky Castle. 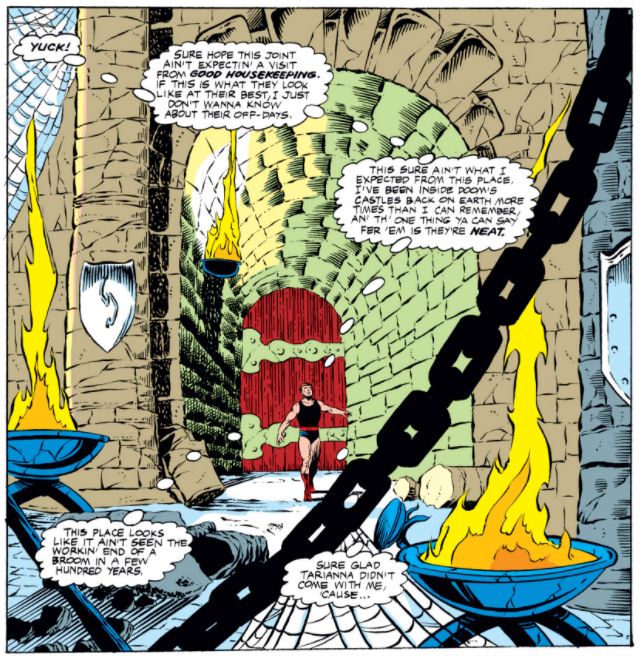 There's a brief Enigmatic Interlude with something happening on the other side of Battleworld, which I'm sure will pop up in a later part of this series, and then we're back to find that Hanrak has captured Tarianna and, for some reason, decided to make her love him again by tying her to a pillar. 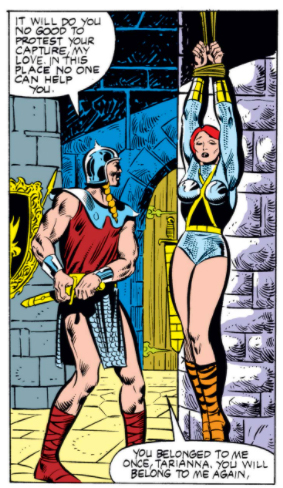 It takes all sorts I suppose. Ben Grimm is elsewhere, battling against Mystic Illusions and suchlike until he is forced to transform into The Actual Thing again.

The idea that he doesn't like being The Thing, but does it anyway, is The Big Gimmick for this version of the series. It seems a bit half-hearted to me - there don't appear to be any consequences to the transformation, except for the fact that it reminds him of when he couldn't change back, but now that he can it doesn't feel like such a big deal, especially when it's a great way of getting out of trouble. This time the transformation allows him to stand up to the Mystic Illusions, fight his way through to the centre of the castle, and find - Doctor Doom! 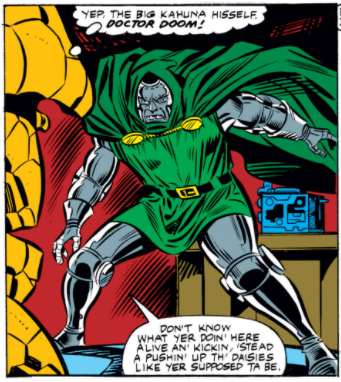 Of course, this isn't Doctor Doom, it's another Mystic Illusion, which seems to be guarding some sort of machinery box. The Thing smashes it, and then the castle vanishes, along with the village and all of the people in it, except for Tarianna. 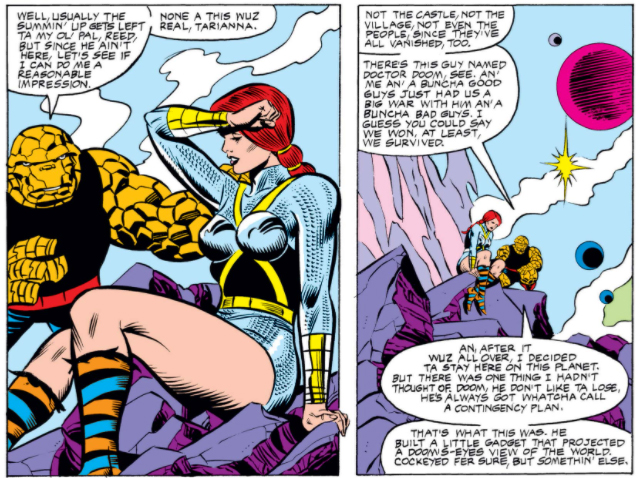 All that's left is for The Thing to give a rapidly cobbled together explanation for the entirety of the past two issues, which seems to be that Doctor Doom had set the whole thing up as a "contingency plan" while he was there, and ... er... left it behind when Secret Wars ended. It all feels like a massive cop-out, especially when the final panel asks the obvious question "so how come Tarianna is still here?" The obvious answer is "because this series needs another character to wander around with The Thing", but that doesn't make it feel any less like a crappy ending for what's been an at least lovely *looking* couple of comics.

We'll have more very good looking comics next time, as we take a look at Barry Windsor-Smith's version of Doom, over in Marvel Fanfare!