Before we get going on this issue proper, I just wanted to note how odd the lettering is on the cover. Like the previous issue, it looks like they couldn't get an actual letterer to put proper comics text in, so pasted it in using Letraset or something. I wonder if that's what happened? The first issue had a traditional comics lettering chunk of text, the second had none at all, and then from then on it tends to be this very unsatisfactory slab of text. I get the feeling a lot of "Secret Wars" was done in a rush, so maybe that was the case here too, or perhaps it was Jim Shooter on his never ending mission to make everything as clear as possible to new readers?

It's a shame as the cover is rather nice - indeed, the art itself is pretty good throughout, with Bob Layton taking over from Michael Zeck for a couple of issues. The writing, however, remains bloody awful!

It starts with a bang - or rather a "BUH-WHU-WHOOM!" as we see the superheroes' base exploding after the attack by the villains last time. Doom is in charge as his group search through the wreckage looking for bodies, but the heroes seem to have escaped. Doom doesn't seem to be too bothered.

He's right not to worry - Doctor Octopus spots the heroes escaping, so Titania chucks a building at them. Molecule Man - in an apparent attempt to impress Volcana - responds by dropping a Mountain on top of them too.

This is all good fun, but the jolly superhero craziness is rather spoilt by the horrible characterisations, notably the "romance" between Volcana and Molecule Man which, as i said last time, reads like it was written by a particularly drippy thirteen year old. 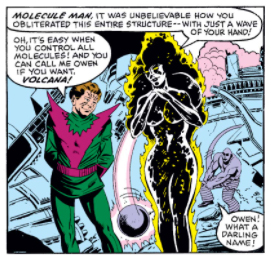 Meanwhile, "half a world away", Thor and Enchantress are having a similarly stilted conversation, but luckily for those of us who hate soppy kissing (yuck!) they are interrupted by an earthquake resulting from the mountain tossing on the other side of the planet, and return to find out what's going on. This leads to a Big Fight between Thor and the villains, which ends with Doom commanding Ultron to disintegrate the Thunder God. 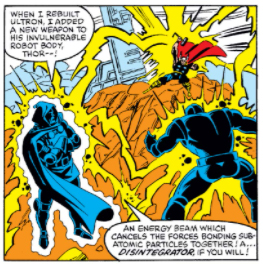 Fear not, true believers, we very quickly get a shot of Thor hiding behind a boulder, so we know he's OK. Phew!

There's then a lengthy section where the X-Men sit around thinking about stuff. It's all tremendously boring and is absolutely PACKED with words.

We then go over to Magneto's base, where we find him using his mighty powers to create a metal comb for the Wasp, who is chatting to him about the fact that there are no toilets in his base. Combs and toilets - this is what The Kids want!

The X-Men arrive and there's loads and loads of talking, during which Magneto suggests trying to kill the super-villains and thus win the contest, so that they can then go back to Earth and create "a golden age... in which men and mutants live together in peace."

This isn't necessarily the nicest way to deal with the problem, but it does seem like a bit of an over-reaction when The Wasp calls him "the most evil scum since Hitler." Really, The Wasp? I think that's going a bit too far, especially when he's just made you a nice new comb. Or maybe she's feeling stressed because she really needs the loo?

This causes things to kick off, with the X-Men trying to stop the Wasp from escaping. I'm not sure why they do this - does it mean they agree with Magneto's idea or not? The Wasp gets away because Professor X refuses to use his mental powers to stop her, even though he did something very sinilar to Spider-man last time, erasing his memory. Charles feels very bad about this, and compares himself to Hitler!

Had Jim Shooter seen a telly programme about Hitler or something, and thought it was a good idea to use him as a comparison point for Not Being Very Nice? It all feels very dodgy, but thankfully that's the end of the X-Men for this time, with the rest of the issue consisting of the superheroes escaping from beneath the mountain. Basically, the Hulk holds up a small section of space long enough for Mr Fantastic to put together some "circuit relays" from the other heroes' costumes and gadgets which enables the Human Torch and Captain Marvel to channel their powers into Iron Man's suit so he can blow up the mountain.

Again, it's a neat solution in a good old superhero style, only spoilt by the tremendous amount of talking that goes on throughout as everyone constantly explains everything to each everybody else. Suffice to say they get out all right and then head over to a nearby village, where there'll be more shenanigans next time. All that remains is for Ben Grimm to suddenly turn back into the Thing and then for Galactus to... um... move a bit. 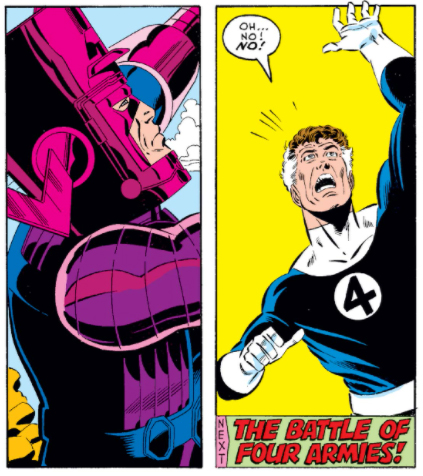 As you may have gathered, I really don't like this comic but I do quite like this incredibly low-key ending. Oh no! He twitched! Will this be followed by some cosmic shuffling, or possibly even a galactic sniffle? Join us next time to find out!