There's a whole lot of sub-plots going on in this issue, with the main one featuring The Wasp getting into trouble as she escapes from Magneto, but also Doom summoning Klaw, Galactus building his giant machine, ructions within the X-Men, Colossus having girl trouble, and the Avengers bickering amongst themselves. It's neither better nor worse than the rest of this series so far, although some of the dialogue from Klaw does stand out as particularly awful.

Last time we were left with one of Jim Shooter's bizarrely dull cliffhangers - Doom sees something mildly interesting! - but before we get to the payoff to that we have to follow The Wasp as she crashes her escape craft, sees some Large Bees and finally bumps into The Lizard. Once that's all done with we finally get to see what Doom's interest was piqued by in the previous issue - some vibrations! 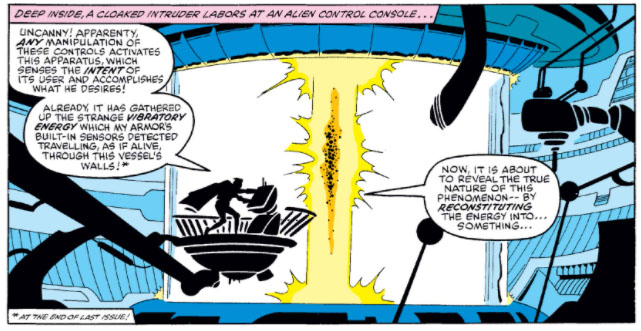 Whoo! Vibrations! That was worth waiting a month for! Luckily for everybody Doom has found a machine that will do whatever you want it to (in which case surely he could use it to get rid of Galactus and all the other superheroes - or is that me being a Super-villain Super-genius again?) and uses it to reconstitute the energy causing the vibrations. It turns out to be Klaw, the (as Doom helpfully explains) "Master Of Sound". 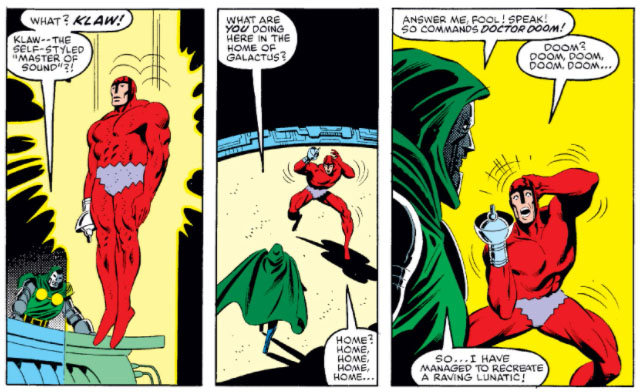 Klaw is traumatised from being converted into energy for so long, and this manifests by him repeating words or parts of words over and over again in a manner that becomes excruciating very quickly and does not let up for the rest of the series. "Crush, rush rush rush rush" he says, "Power, ow-er, owe-er, owe-er" and so on on on. Doctor Doom, quite understandably, decides that Klaw would be most useful at a distance, preferably out of hearing range, and sends him off to give orders to the other villains. 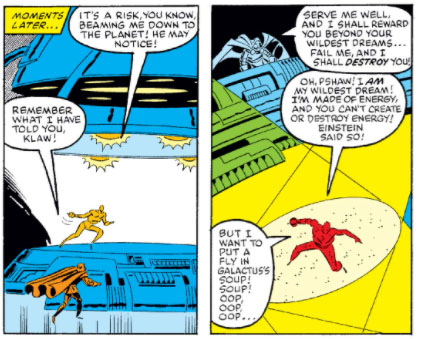 We then get a single panel of Galactus carrying on with his building, before we return to The Wasp, making friends with The Lizard. It's then yet another change of scene as we discover Professor X using his powers to see what's going on around Battleworld, and then to telepathically boss the X-Men around. They all leap into action at his orders, except for Storm who is supposed to be the current team leader and thus objects to him telling them what to do. They have an argument about it during which Storm is angry and Professor X is, to use the correct psychological terminology, a bit of dick. 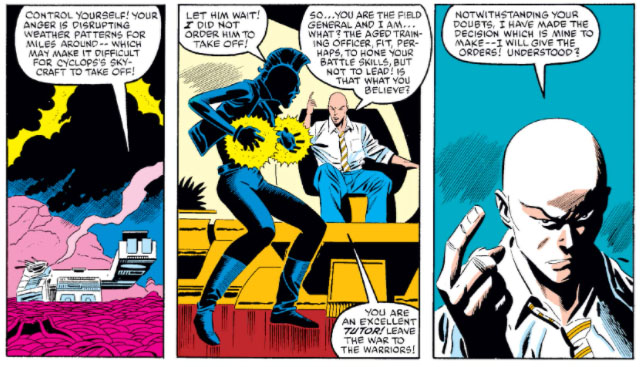 As I've said before, Jim Shooter seems to think that constantly having characters argue with each other counts as characterisation, but when they do it like this without any charm or much justification it becomes grating. Not as grating -ating -ating -ating as the way Klaw talks, of course, but still not much fun.

Back in the alien village we drop by to find Colossus tormented by his feelings for Zsaji, when he should be thinking about his underage girlfriend back home, and then there's more bickering from the Avengers.

The Hulk makes an excellent point here - the Avengers spend pages and pages chatting but doing nothing very interesting at all. Hawkeye even has time for some whittling! 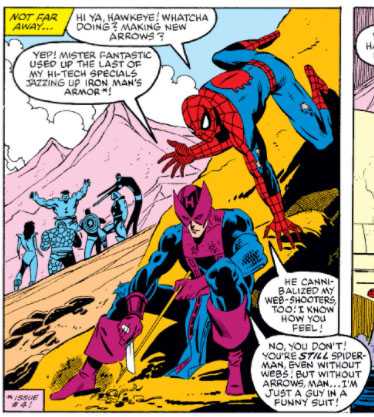 There's a bit more action when Cyclops, Rogue and Wolverine, following Professor X's orders, bump into some supervillains and have a pointless fight which they all walk away from. Cyclops works out that the villains were there trying to ignite a volcano and decides that, actually, this is a really good idea and so zaps it with his eye blasts which cause the whole range to start erupting. 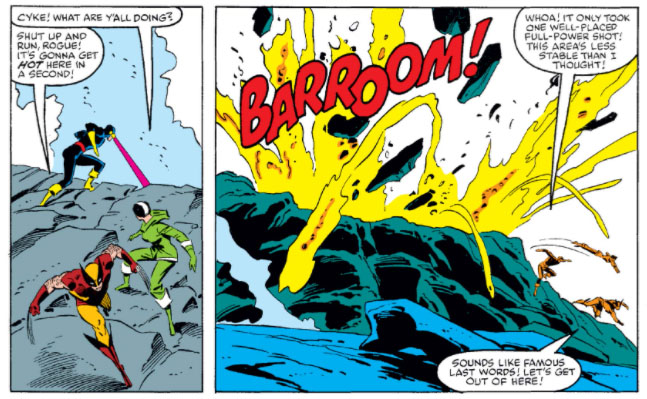 Is it me, or is this complete nonsense? We then flip over to The Wasp, who is killed by a laser blast from The Wrecker and then scooped up into some sort of bulldozer thing by the baddies who drive back to base with her body. The death happens in a single panel, out of the blue, and the whole episode is done in the most pedestrian way possible - I really do not want to be That Guy, but surely the murder of A Founding Avenger in a Big Event Comic deserves more than a single panel? The comic spends more time discussing how to pick up her body from the swamp than it does with the actual death! 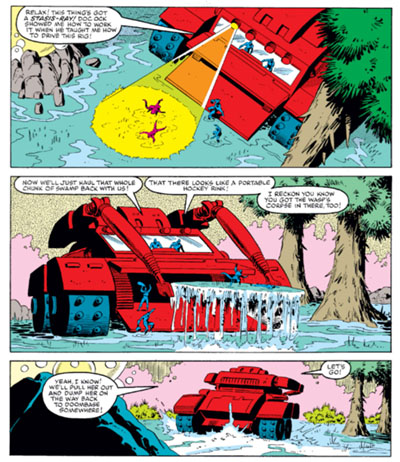 The whole comic, not to put too fine a point on it, absolutely terrible from start to finish, but happily there's only one page left, which features as the climax to the whole story The Avengers looking at Galactus' ship and, THRILLINGLY, deciding to wait around a bit longer. 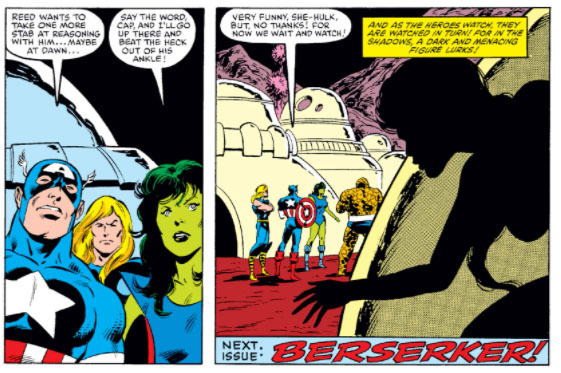 SPOILERS: the shadowy figure listening to their extremely dull conversation will turn out to be neither dark nor menacing, as we'll find out next time!