Secret Wars continues with a story in which, despite the title, nobody goes berzerk and nothing even vaguely berzerk-ish occurs. On the contrary, most people involved are very very calm and sober. This extends as far as the cover, where once again we see the use of non-comics lettering to explain what's going on inside. Were the usual letterers just so bored with it all that they had to get someone else to finish it off with some letraset?

The story itself kicks off with a splash page revealing the answer to last issue's cliffhanger , which showed a mysterious figure lurking in the shadows near the superheroes' base. Who could it be? What are there intentions? Comics fans must surely have spent a month trying to work it out, only to discover right away that it's... a character they had never seen before! And she's just popped by to say hello!

Bizarrely, after taking up the whole splash page and then another page saying hello to everybody, this new Spider-woman doesn't say anything else for the whole issue, and only appears in two more panels, right at the end, in the distant background of a group of heroes. So what on earth is Jim Shooter playing at? It feels like one of those series where different creative teams leave a cliffhanger at the end of an issue for the next team to get out of, except here it's the same team and they get out of it by chucking in a new character (possibly because they needed new female characters for the toy range) and then forgetting about her. Have I mentioned before what a load of rubbish this all is?

Once Spider-woman's finished saying hello a tank arrives, and the super-villains inside chuck out the dead body of The Wasp. 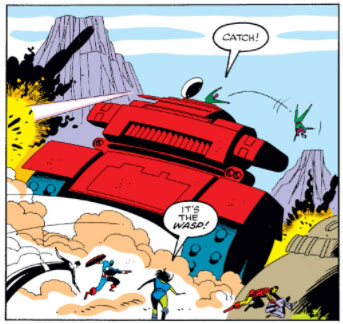 There's something about the way that this is done that just feels... wrong. Obviously Murder is a Very Bad Thing, and super-villains are meant to be super villainous, but just chucking a body around like this doesn't seem to fit with the way Marvel comics work. It's a queasy wrongness that hovers over the whole series, as if Jim Shooter is trying to do this new "Grim'n'Gritty" style that was becoming popular at the time, but does it all from the standpoint of the teenager who used to write Legion Of Superheroes. In many ways it's a forerunner for the really really terrible comics that were to come in the nineties, but without the crazy frenetic artwork.

Talking of which, there's a few panels in this issue that look markedly different from the rest, as if they've been drawn by another artist apart from Mike Zeck. This one, for instance. 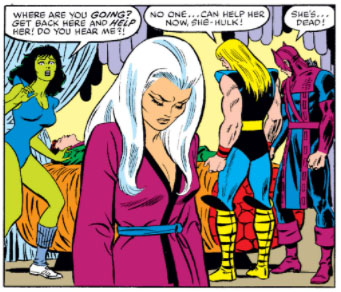 I want to say that it looks like Joe Staton, but I don't think that's right. John Romita Sr maybe? Anyway, in reaction to this horrible murder of their long-time friend the superheroes fly into action immediately and ... have a lengthy discussion before deciding to do absolutely nothing at all. Captain America says that Doctor Doom may be trying to goad them into action, so they mustn't fall for it and instead carry on with watching Galactus build his contraption. This is exactly the sort of thrill-a-minute superhero action that we want - who knows, by the end of the issue they may decide to take a nap!

Next we see Volcana and Klaw at the villain's base. Klaw is still doing the "repeat the second half of a word -urd - urd" thing that is so annoying, and also refers to Volcana as "plump". Everybody keeps referring to her weight throughout the series, but Mike Zeck does not seem to have read the dialogue as he continues to draw her to almost exactly the same body type as the Enchantress. 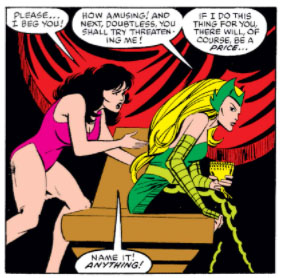 Again, this feels like Shooter trying to be "Different" by having an overweight character, without going to the trouble of having them actually BE overweight.

Volcana makes a deal with Enchantress so she can go to be with Molecule Man, who is being brought back to base by some of the other villains. She gets there just in time for them to run into the X-Men, at which point an entirely pointless fight breaks out. I mean, it's a blessed relief to get some proper action at last, but it does seem a bit insulting when it's all over for the comic itself to state that it was entirely pointless. 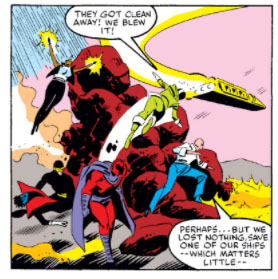 "They got clean away", "But we lost nothing, save one of our ships - which matters little." Phew, talk about high stakes!

We finally get to see Doctor Doom next, still prowlilng around Galactus' ship "like a burglar", monologuing to himself about whether he's scared or justifiably nervous, and wondering how long he can carry on before Galactus notices he's there. 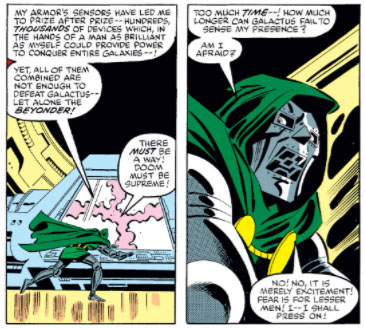 Clearly he forgot to touch wood, as no sooner has he said this than Galactus does notice, and expels him from the ship. 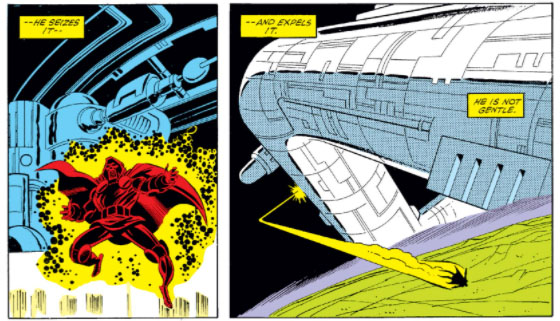 Doom gets sent back to Doombase, having achieved nothing except to use up a few pages over a couple of issues, and collapses into bed. 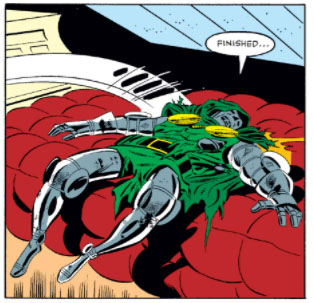 There's something that feels wrong about this sequence too, but I can't quite put my finger on it. We've seen Doom stagger off defeated on a few occasions before, but never to simply collapse into bed. We've seem him in bed before too, so maybe it's the fact that he doesn't even bother to get into his hooded pyjamas? 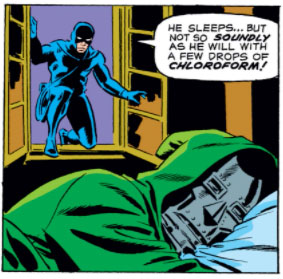 While he's having a bit of a lie-down (I told you there'd be some napping by the end!) She-Hulk arrives to take revenge for the Wasp's murder, only to be roundly duffed up by the super-villains. She's slipped away from the other heroes without getting permission from Captain America, and when this news reaches him he still refuses to go and help her out, because it's very very important that they all sit quietly and watch Galactus do whatever he's doing, without taking any action at all. He won't even let the others vote on it - Captain America is rubbish! 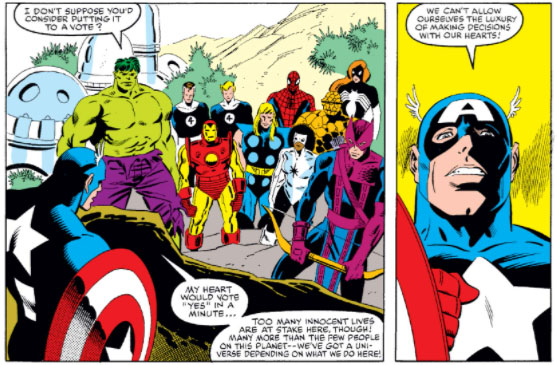 However, just when it looks like the rest of the issue is going to feature everyone sitting quietly and doing their homework, Cap gets a telepathic message from Professor X to say that the X-Men will take over the job of sitting around doing nothing, so that The Avengers can get on with any other projects they have on the go. 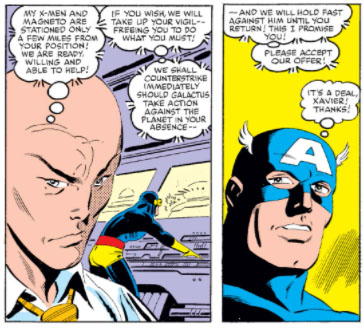 Oh my good grief, this is just terrible. How does Professor X know about She-Hulk? Or is he just offering some generalised respite? Why is he now deciding to help out? Aren't they supposed to be enemies, or at least suspicious of each other? And how is this in any way a dramatic form of storytelling? Captain America refuses to take action, but then someone offers to help so he simply changes his mind. It all leads into a final panel which promises action at last, but it's action that could have been taken at any point ovee the entire issue.

Thankfully that's the end of the issue, and marks a point where we're going to take a brief break from Secret Wars to go and look at... a video game!