The game is "Questprobe 3: Fantastic Four Chapter 1" which sees you guiding The Thing and The Human Torch through a text-based adventure story. There was meant to be a chapter 2 which, presumably, would have featured Mr Fantastic and The Invisible Girl, but that never materialised. Having tried playing this game I must say I'm not hugely surprised!

I must admit that I didn't actually manage to play this all the way through - I did try, but after a few hours it became so incredibly annoying and tedious (even for a 1980s text-based adventure) that I gave up, and so am basing this assessment a walkthrough on YouTube using, of course, the ZX Spectrum version.

There were tie-comics for the Questprobe series released, telling the story of what happened before the games started, with Spider-man and Hulk featured in the first two. The comic for "Questprobe 3" isn't featured in this corpus though because it doesn't feature Doctor Doom at all. The game barely squeaks in because we're told via a copyright notice that Doctor Doom and his distinctive likeness will be appearing... but he doesn't. 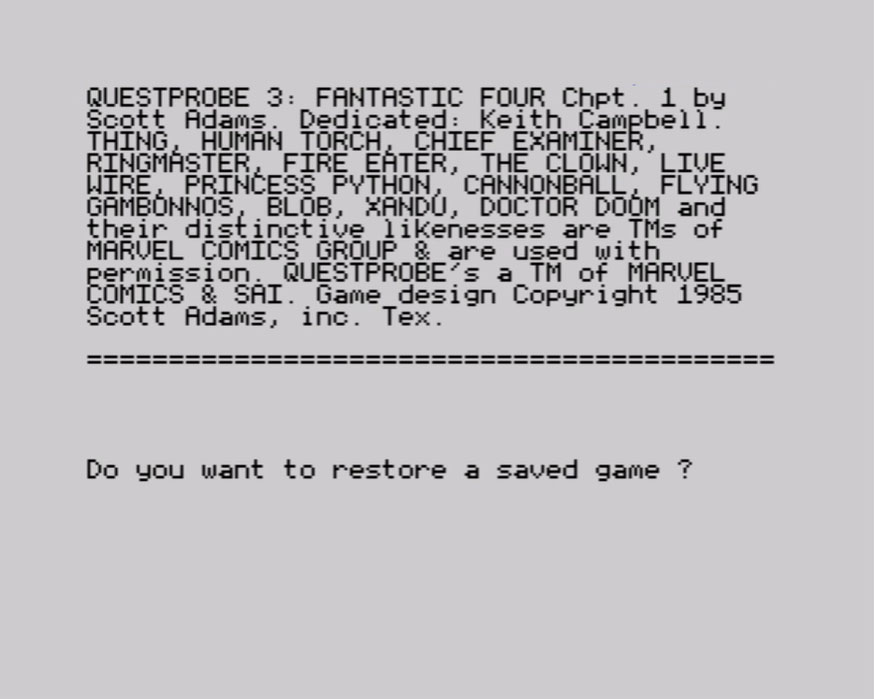 The first puzzle in the game is how on earth to get it started. You can try all sorts of things but in the end the only option that actually gets you anywhere is to say hello to the Examiner, who then tells you that "you must free ALICIA MASTERS from DR. DOOM" and that you'll need to "master the powers of two MARVEL SUPER HEROS (tm)" to do it. Exciting! 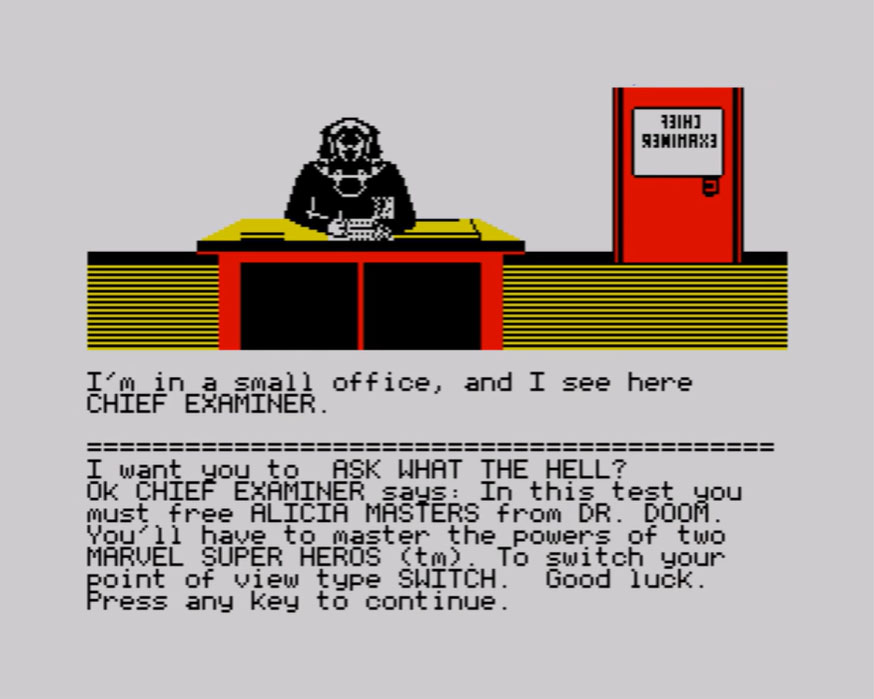 The game begins in office of The Examiner, a character invented for the Questprobe series as a mysterious figure setting extremely annoying and pedantic questions for superheroes. The first puzzle is how to get the actual game started, and once you've managed that the excitement kicks off with The Thing stuck in a tar pit and the Human Torch floating around helplessly. The Human Torch is generally useless throughout the story, getting tired within about 30 seconds whenever he flies anywhere, so you spend a lot of time using the command "WAIT" so he can get his breath back. There's so much waiting, in fact, that the game allows you to use commands "WAIT 10", "WAIT 20" and "WAIT 50" so you don't need to keep typing it. In this instance, your only option is to be The Thing, hold your breath, and then just wait to get sucked down further into the tar pit. 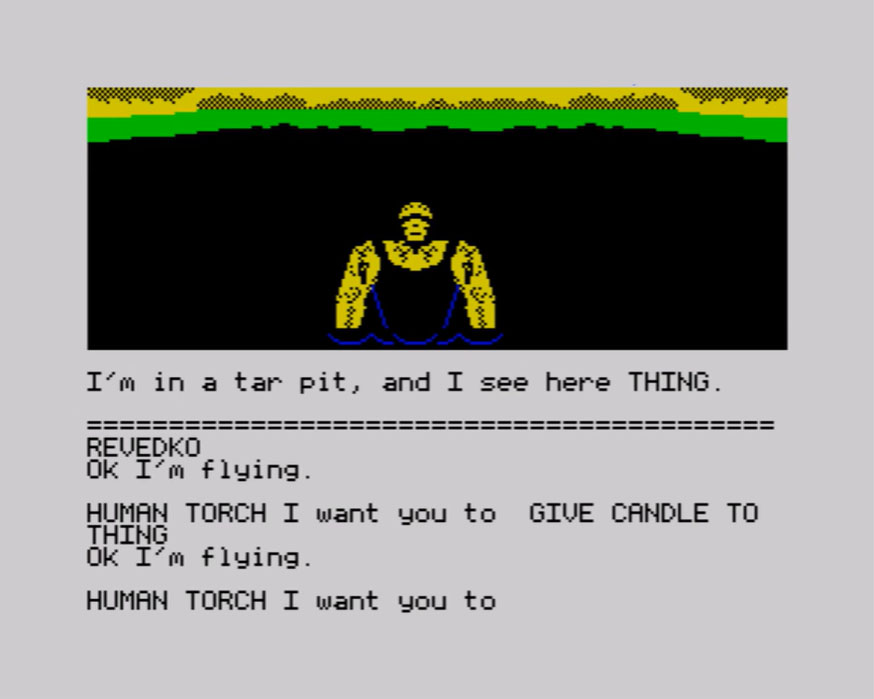 Once you've fallen through you're in a dark space where you have to scrabble around and find some machinery, which you can smash! "IT'S CLOBBERIN' TIME!" says The Thing, and that is pretty much the end of Clobberin' for the whole game. He then has to wander around in the dark for ages (which at least saves on memory for graphics) while The Human Torch flies into a cave and uses his amazing powers to... er... chip a pebble off a stone and drop it down a hole. 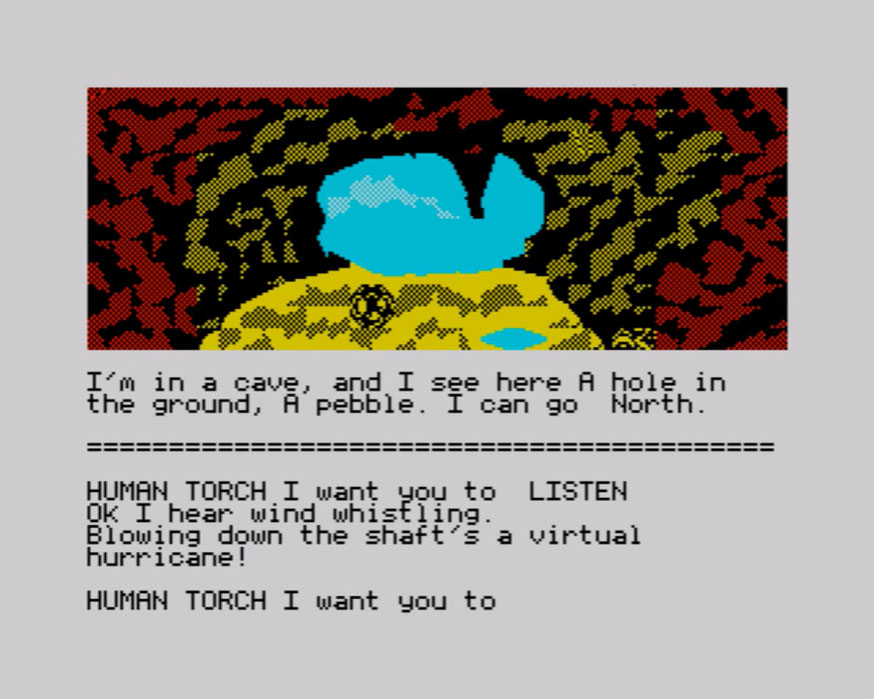 This is followed by some interminable falling down a ventilator shaft, and more staggering around in the dark. 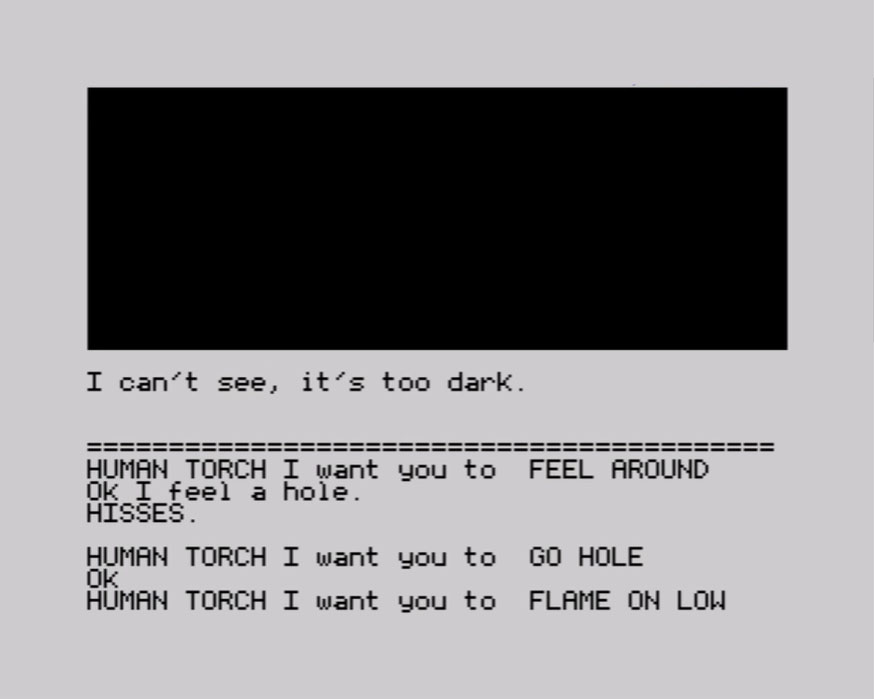 Maybe I was expecting too much from this, but it doesn't feel particularly superheroic. Eventually you find a maintenance room, and then the Human Torch flies outside again where he finds Doctor Doom's castle - at last! 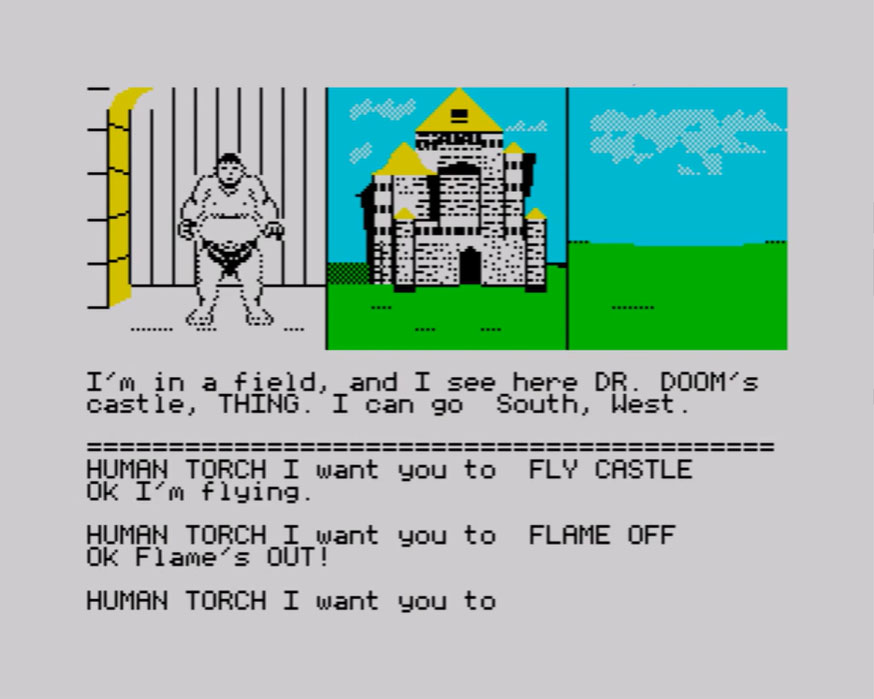 I'm slagging the plot and game mechanics off here, but I must say the graphics - when they eventually get a chance to show superhero stuff rather than darkness and tar pits - are pretty good, and Castle Doom is very on model! The entrance to the castle is guarded by The Blob, and the to get past him you first need to zoom off to a nearby circus tent, where we discover - The Circus Of Crime! 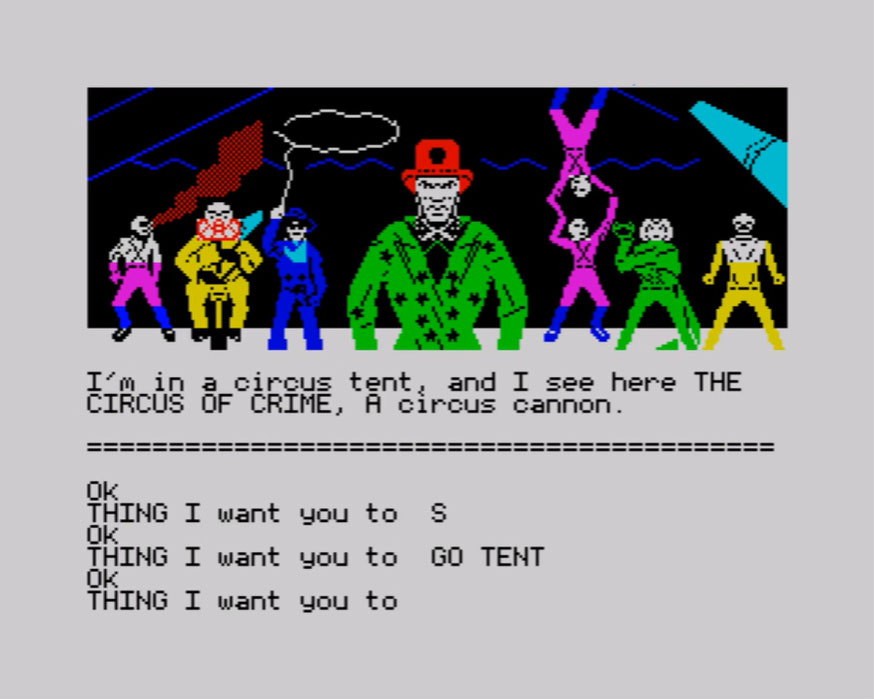 I wonder if Scott Adams, the writer of this series, had been given Super-Villain Team-Up #9 as reference, as that has The Circus Of Crime in Latveria? It also has Namor, Rudolfo, and all sorts of exciting (if confusing) incidents, so maybe it wasn't such an inspiration after all, because none of those things crop up here. Instead there's some business with a cannon and the need to close your eyes to avoid being hypnotised (which leads to another wonderful image of darkness) and you then pop over to somewhere we know well - Latveria! 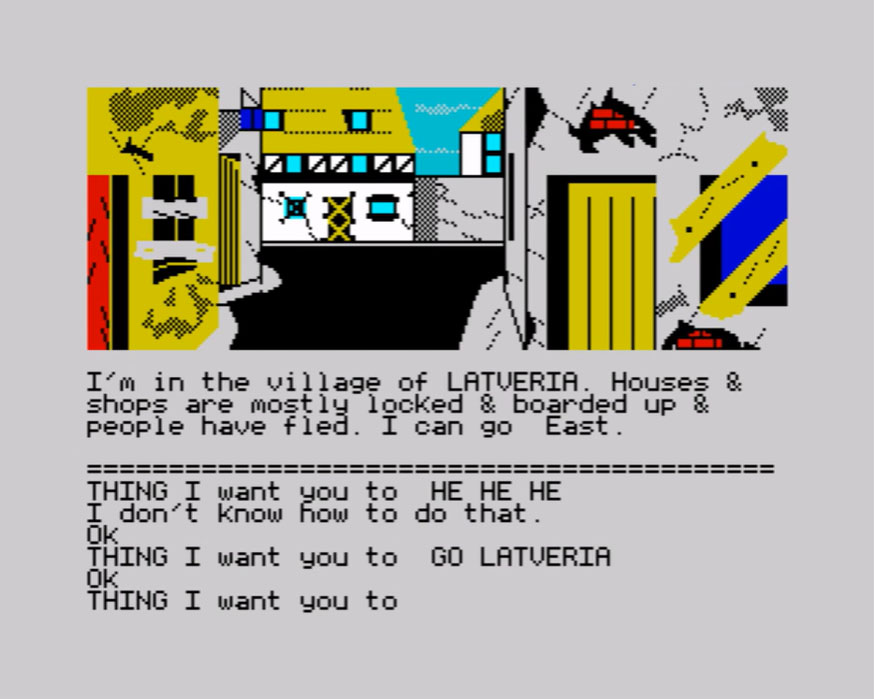 This is "the village of LATVERIA", rather than the country. We've seen Latveria be an island back in the days of The Marvel Superheroes cartoon and we've seen it act as a homage to The Village from "The Prisoner" in Fantastic Four #85 (in a story called "Prisoners In The Village"!), but this is the first time it's been described *as* a village. Here it's boarded up and abandoned, for reasons not given, so all you can do is pop into an abandoned shop where you find some very handy gun powder. You can then use this, eventually, after lots of waiting and fiddling around with syntax, to fire The Thing via the cannon into the castle. You don't get to see this happen, but you do get the aftermath! 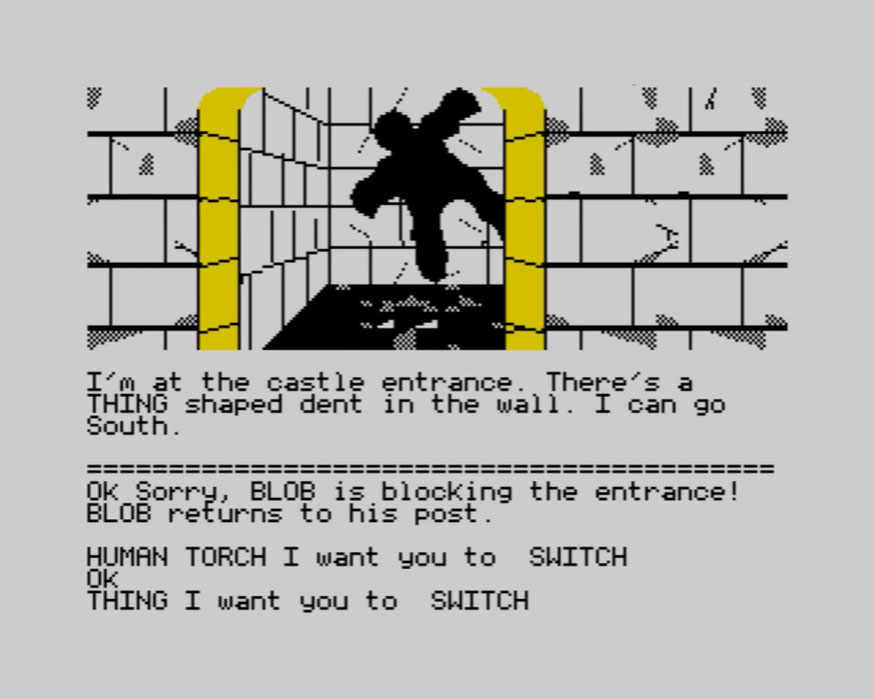 The Torch has to WAIT a whole lot more to get his energy back, then re-traces his steps back into the castle via the tedious ventilator shaft where he causes an earthquake (somehow) which in turn allows Thing to go into a different room where he finally - finally - sees Doctor Doom! 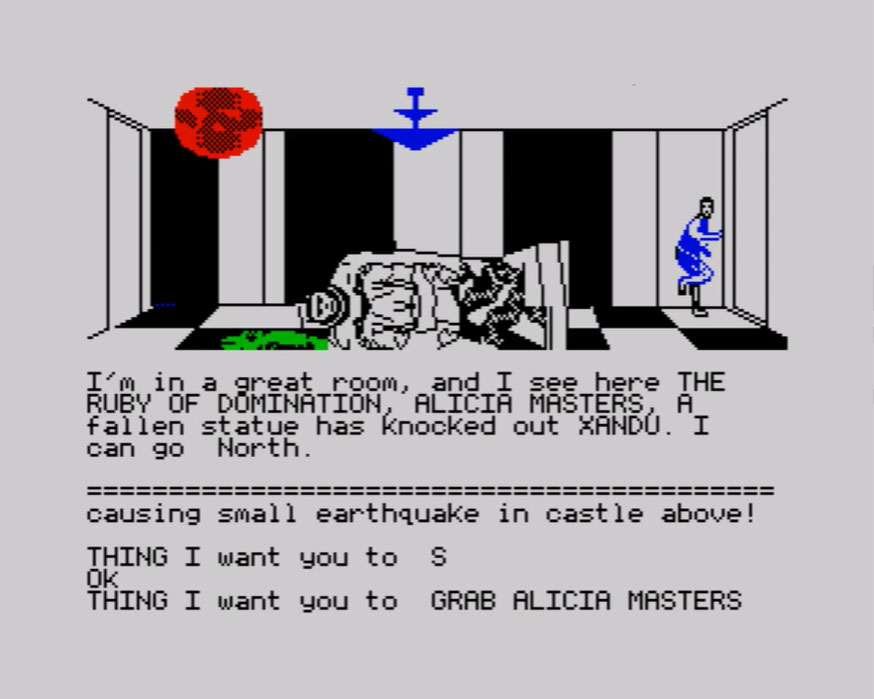 All right, he sees a statue of Doctor Doom, which has fallen over, but still, surely this is the start of the action, right? 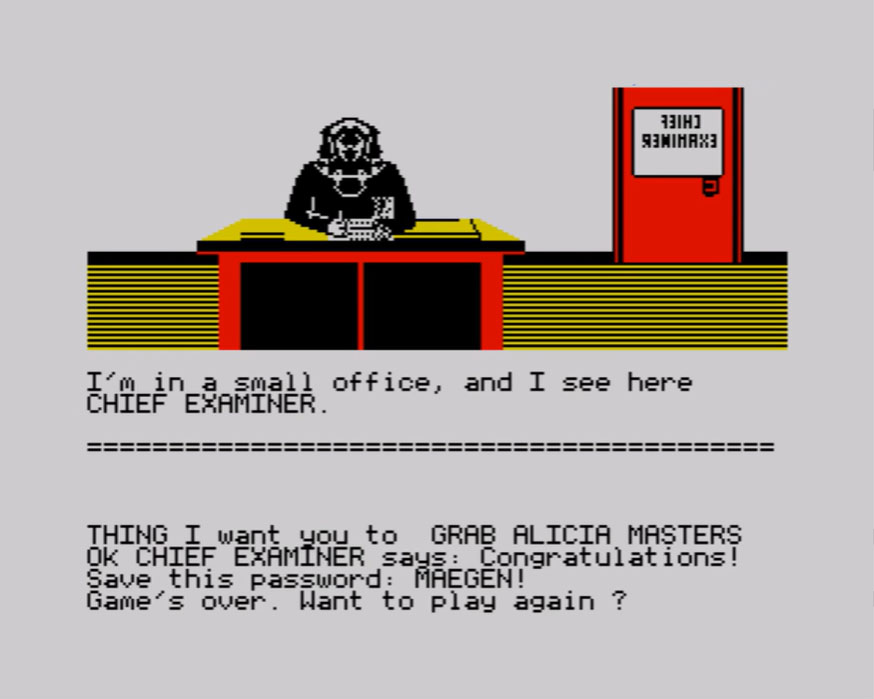 Hang on, what? You grab Alicia and then it's Game Over and back to the Examiner's Office! This was, of course, very often the case with computer games of the 1980s, where there was so little memory available that the end of a game would be signalled either with a text message saying "Congratulations You Have Finished" or just going back to the start again, but after all that it does seem like an anti-climax for a superhero story to end in an office. Although, having said that, an "adventure" that mostly involves waiting for people to get their breath back probably deserves something like this - it's almost making me miss the constant Chats About The Weather in "Secret Wars"!

Talking of which, we're back to Battleworld next time, when the big thrill is going to be someone changing their outfit! I can hardly wait!