We're back to actual comics lettering on the cover of "Secret Wars" this time, which signals a return to some actual comics action inside, although you wouldn't necessarily guess that from the image on the front. To be fair, "Spider-man Changes Clothes!" would actually have been an exciting inducement at the time, as Spider-man had been wandering around in his new costume for over six months in his own series by this point, without any explanation of how he got it, so comics-readers at the time must have been quite excited to finally find out how it all happened.

I doubt they'd have been very excited when they actually found out, but that's another matter all together!

There's hardly any Doctor Doom in this issue, so we might as well get that out of the way. He appears just twice, and doesn't speak either time. We first see him sat on his bed, still stunned after being ejected from Galactus' ship last time. 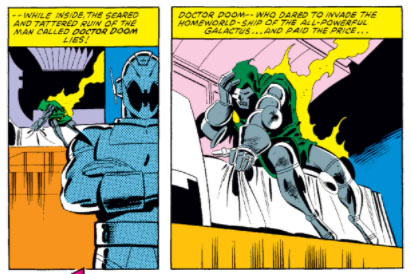 We then see him towards the end of the story, still sat on his bed, and still stunned. 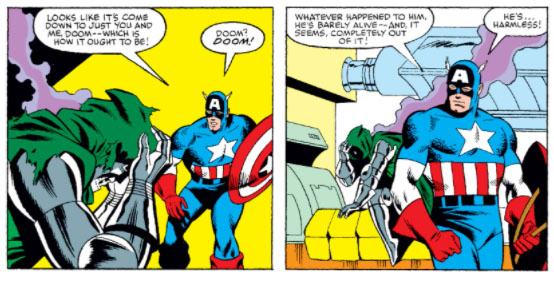 And that's your lot! There's a HUGE amount of hanging around for things to happen in this series, as if Jim Shooter had an idea for a four issue series that then had to be padded out to fill twelve. I re-read "Crisis On Infinite Earth" a year or so ago, and found that that suffers a bit from the same problem - the heroes are constantly going off to fight battles that don't seem to matter much, or embarking on busy-work side missions, but at least in that series you sense that it's building up to something, and of course it looks amazing with George Perez drawing all of those characters, and Marv Wolfman makes all the different worlds seem really exciting. In "Secret Wars" it's just the same characters every month, talking about the weather.

Still, this issue does at least fulfill the series' main objective, which is to have a load of superheroes having a big fight with a load of supervillains, although it takes a little while to get there. We start where we left off last time, with the heroes zooming off to Doombase to rescue She-Hulk and take revenge for the murder of The Wasp. Their approach is watched by The Enchantress, who is - horrors! - drinking!! 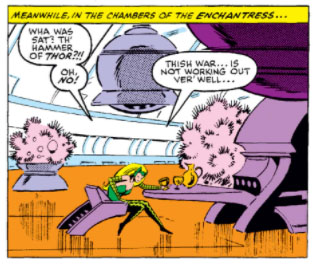 Has Jim Shooter every actually had a drink? Or is this like the "romance" in previous issues, where he's channelling a thirteen-year-olds idea of what adult life may be like? Or - perhaps worst of all - is this another of his attempts to be "grim and gritty", as was the incoming style at the time?

Happily, we then launch into something which Shooter and Mike Zeck are much more capable of producing - a proper fight! Over the next several pages we get a whole series of punch-ups, as heroes and villains split up into various combinations to wallop each other in an entertaining set of ways. There is still an awful lot of talking, but at least this time it's accompanied by a bit of violence!

The goodies win after a satisfying bout of punching and zapping, and after the usual dreariness of characters telling each other things they already know, we go over to Colossus in the alien village. He's carrying an unconscious Zsaji back to her hut. She seems "on the edge of death" so he does the only sensible thing - he lights up the "mind-linking vapors" that she shared with the Torch a little while ago because, as everyone knows, the best cure for death is to spark up a bong. 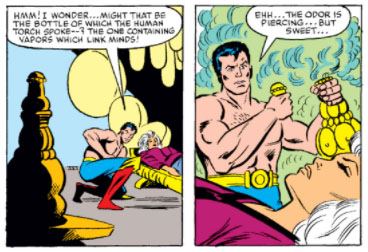 This reveals a shocking truth, that "The Wasp was not dead - merely wounded, but also in some kind of death-like stasis". What? She was zapped by a lazer beam and then chucked out of a moving vehicle - how on earth is that "merely wounded", and where does this "death-like stasis" come from? It is, of course, a load of old rubbish like so much of the rest of the story, but it feels even more stupid than usual. Zsaji, it turns out, is in her own death-like state because she went off and revived Wasp when no-one was looking, and we see the results of this on the next page when Hawkeye and Captain Marvel find her back alive again. 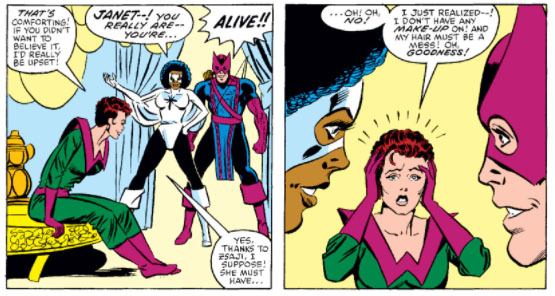 With that bombshell we briefly cut back to the X-Men, who are sat around watching Galactus tinkering with his device. All of a sudden though, something happens so shocking that it makes Nightcrawler drop his muffin!

We're getting near the end now, but you might have noticed that we still havent had the thrilling story of how Spider-man got his new costume. Fear not, that mighty moment has finally arrived, as we see Spidey bump into a very pleased looking Thor and Hulk. It seems that the Hulk has worked out how to use one of the alien machines, getting it to create new clothes simply by thinking about them. How they managed this is anybody's guess, but there's a much more serious question to ask here: if the Hulk can now operate a machine to create new clothes just by thought, why is he still wearing the same tatty old ripped up trousers>

Spidey goes into the Machinery Room, finds a machine that "looks like it wants to make me a costume", sticks his head in, and then the new costume appears. 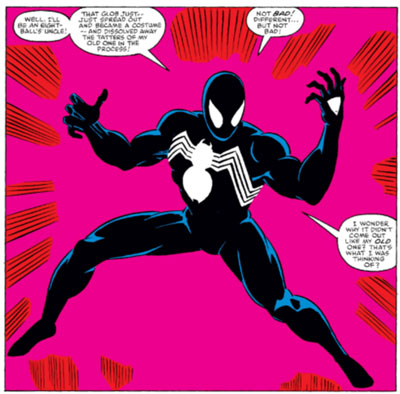 Yes, true believers, the big mystery is solved - Spidey got his new costume by... thinking he could do with a new costume! Wow!

As we all know, there would eventually be a bit more to it than that - various retcons over the years have shown that Spidey used the wrong machine and instead released the alien symbiote Venom which just pretended to be his costume for a while. I do wonder if there might have been an inkling of that right from the start - Spider-man does say that his spider sense is tinglling right before the costume appears, and there's a nice big gap in the plot which would very much allow for him to use the wrong machine. Could this be Jim Shooter NOT just making it up as he goes along?

He clearly wasn't thinking ahead for the pacing of the story though, as after finally getting round to the costume reveal there's only two panels left in the whole comic, one of which consists of Spider-man falling over due to a sudden earthquake, and the other with a weirdly dull looking image of Professor X telling the other superheroes that Galactus has finally finished tinkering with his Galactus-Gizmo and is about to start doing what he always does - eating the planet! 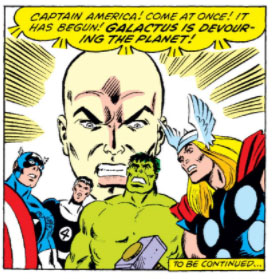 Who can blame Nightcrawler for dropping his muffin in the light of that news? We've got a proper cliffhanger at last, but sadly we'll have to wait to find out how the heroes deal with it, as next time we're off to see what Doom's up to back in the main timeline, in "Beauty And The Beast"!