Beauty And The Beast

Over the past year or so of writing this blog I've got into an interesting situation where I'm reading a lot of comics that I first read when they actually came out. Several years ago when this all started it was all about series like Lee and Kirby's run on "Fantastic Four", long accepted as A Classic, but as we moved on towards the 1980s I started to find that any critical opinions I might have on a given text were mixed up with my memories of reading it when it first came out. With John Byrne's "Fantastic Four" series I can often remember which shop I bought each copy from, and reading them back now I find that they're touched with nostalgia for the excitement I felt back then.

However, as time moved further along we arrived at my teenage years where excitement got mixed up with disdain, when I'd spend a lot of my time around comics slagging them off with the two or three other people at my school who walked the long lunchtime walk to our local comics shop. I'd started to read fanzines like "Fantasy Advertiser", and was coming across viewpoints that were very different to the ones I'd read in "Marvel Age". I was beginning to see that there was a whole other world of comics out there aside from the superheroes.

With all that in mind, I did wonder what I'd feel when I got to series like "Secret Wars", which I had thought was so terrible at the time. Was that just me being a teenager and deciding that everything popular was crap, or was it really as rubbish as I remembered? As we've seen recently, it was, if anything, even worse! Looking ahead to some of the other comics still to come I'm starting to think that I was on the money back then, as there's some right ropey old rubbish on the way!

Which brings us to "Beauty And The Beast"! The cover to this first issue gives you the idea that it might be quite good, with a Bill Sienkiewicz illustration promising some of his thrilling "experimental" style of art, and a dramatic pose which leads the reader to believe they're going to get some high drama and also some Doctor Doom. Reading the actual comic, however, you get none of these things. The art is by Don Perlin, an old-fashioned craftsman whose style is about as far from Bill Sienkiewicz as you can get, and Ann Nocenti's story is a dreary, plodding tale that mixes up an unconvincing attempt at romance with a parade of entirely dull characters. Worst of all, Doctor Doom only appears for a couple of pages per issue, and doesn't join in with the main storyline until the very end!

Happily for me, the series does at least start with Doctor Doom, roaming around the art gallery which is the "heart" of Castle Doom, looking at artworks which only those worthy enough (i.e. him) are allowed to see. 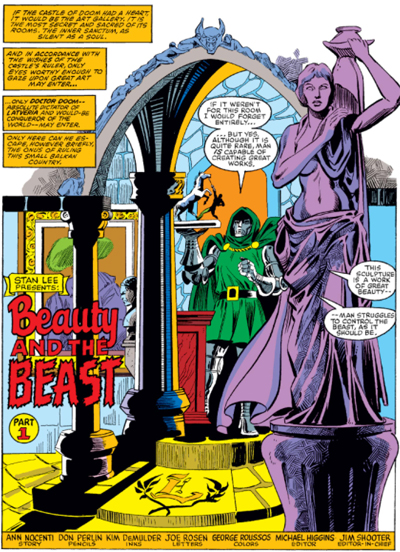 He wanders around monologuing to himself about the virtues of dictatorship, only to be interrupted by a lackey with news of someone in America claiming to be his son. It's not clear whether this person actually is Doom's son or not, although we do get a flashback to Doom sending a child and its mother away from Latveria while he thinks "Doom must not have a son", which suggests he might be. So why does Doom now call him a liar? 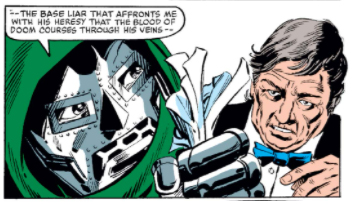 With our alloted two pages of Doom done for, we get to the main story, which starts with The Beast arriving in Hollywood on holiday. He bounces around the sights and sees some anti-mutant graffiti on a poster for a Dazzler gig. We then see Dazzler herself at a "decadent" Hollywood party, where she's drinking Ginger Ale. 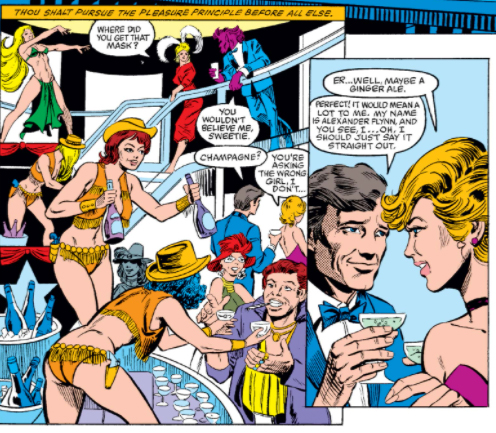 As a Certified British Person I always find it extremely weird in American media when drinking booze is something that only villains and alcoholics do, and if started invariably leads to a rapid descent into evil and/or madness. Here Dazzler's heroic nature is shown by her refusal to drink alcohol, and the basic evil of the other characters by their acceptance of it. It does make me wonder though, what is she doing in this den of iniquity in the first place?

Dazzler meets a "fan" who next day introduces her to a "producer". She signs a contract immediately and then over the next few days she and her fan go to various parties where - OH NO - she has a drink of THE DEMON BOOZE. 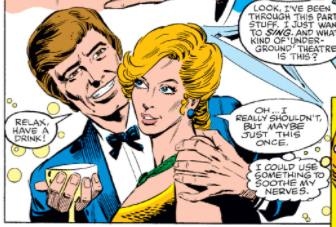 Days pass and she finds that she has very quickly got herself a reputation as... The Queen Of Decadence!

She finally gets to a film studio, where she bumps into The Beast, who's on a studio tour with his old pal Wonderman. There's a minor kerfuffle when Beast objects to the way that Dazzler (who he's never met before) is being addressed, and then she leaves as Hugo The Producer stomps off. Hugo turns out to be a Bad Egg who is wanting to cynically use Dazzler for her singing and acting talents - the absolute fiend!

Dazzler gets lost in a back lot, where she realises that her power is operating without her wanting it to. The Beast, meanwhile, has become obsessed with Dazzler and decides to break into the Producer's house to prove he is Up To No Good. Here he meets another mutant and they have a big fight that goes on for ages while, elsewhere, we find Dazzler staggering around with her powers going haywire. 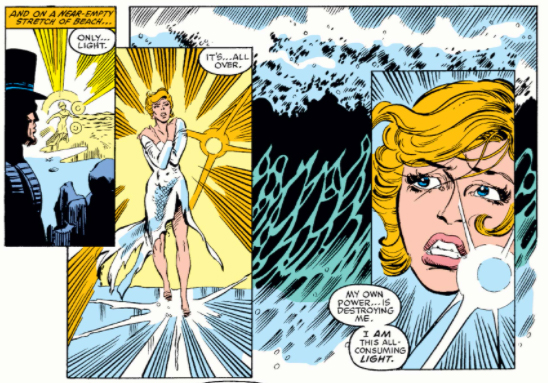 We're meant to see Dazzler as an innocent victim of Hollywood Naughtiness and Beast as her saviour, but all the way through this Beast acts like an obsessional weirdo who's decided to "save" her despite the fact he doesn't really know her at all. This feeling is only added to when he strangles somebody to find out where she is. 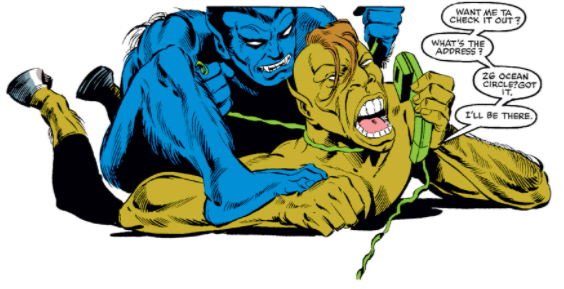 As with "Secret Wars", this sudden insertion of violence feels queasily wrong, like Marvel is trying to catch up with popular "Grim'N'Gritty" stories like "Dark Knight" and "Watchmen" by copying the perceived violence, rather than the storytelling, artwork, or ideas. This is something that would become a theme for the following decade of comics, and it's one of the reasons I'm glad my corpus finishes in 1987!

The issue concludes with Beast arriving at A Weird Old Hotel, where he finds Dazzler glowing uncontrollably on an old mattress. Rather than seek help from Professor X or any of the many other Superpower Experts he knows, Beast grabs hold of her, tells her to stop talking, and says he'll take care of her. 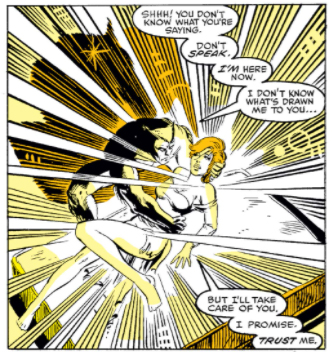 And that's that for this issue - the series only came out bi-monthly, so we've got a couple more issues of "Secret Wars" to go before we find out whether Dazzler tells him to get lost and stop being so creepy. I wonder if she will?