Last time we visited Battleworld Doctor Doom was having an extended lie-down. This time he does actually get out of bed, but it takes him quite a while, and we have to get through a lot of talking and some extreme stupidity in the mean time.We do, however, get a title which for once bears some relationship to the story contents, as they actually do try and fight Galactus!

We start with the X-Men reacting to Galactus finally finishing off his World Eating Machine and doing their best to stop him. They completely fail, because he's Galactus, but while they're doing that the other group of heroes are just as busy, talking and talking and talking.

As well as Thor giving Hulk a pep talk we also see Ben Grimm delighted to turn back into the Thing (despite him spending the past couple of decades wanting the opposite) and James Rhodes embarking on a lengthy monologue about the fact that he, not Tony Stark, is Iron Man - "now and forever!" - which didn't exactly work out that way. Oddest of all these interludes (at a time when the entire planet is about to be eaten, don't forget) is Spider-man demo-ing some of his new suit's abilities to Reed Richards. 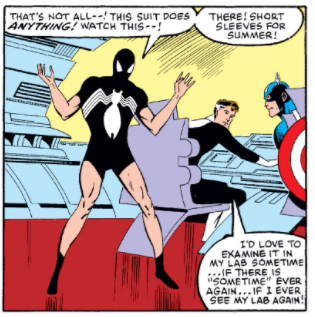 Nice! The only person not talking at enormous length is Reed Richards, who is too busy thinking at enormous length. Along with the deluge of words this does at least feature a nice illustration by Mike Zeck, showing the two groupings of heroes and the larger one of villains. What's especially nice about this is that he makes it work as a Venn diagram, with Magneto as the crossover between villains and the X-Men.

Jim Shooter is obsessed with explaining things all the time, which is fair enough if you want to make the story accessible to new readers, but he's also obsessed with these weird plot cul-de-sacs where ideas pop up from nowhere, delay the progress of the story for a few pages, and then disappear again. In this issue it's Reed Richards suggesting that they shouldn't stop Galactus after all. 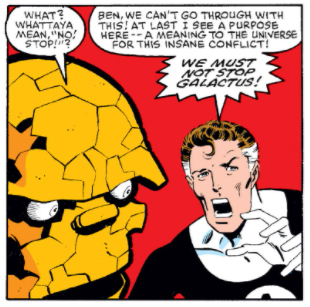 The (stupid) idea is that if they let Galactus kill them all then The Beyonder will have to give Galactus his wish, which (Reed assumes for no reason) will be to free him of his hunger, so lots of future worlds won't get eaten. Alternatively, The Beyonder won't grant him his wish and Galactus will be so powerful from eating the planet that he'll be able to beat The Beyonder and then either one or both of them will die in the conflict, leaving the other to either carry on eating planets or doing whatever it is the Beyonder's up to. What the so-called smartest man in the world doesn't consider here is that Galactus' greatest wish might be to have a full set of Beanie Babies or something, but before anyone can point this out Reed is teleported to Galactus' ship for a chat.

Reed later reports that, during this meeting, Galactus told him that he is "a force of the universe, just as he is... a universal champion of life just as he is an instrument of death!" Hmm. This has never been mentioned before, and as far as I know never was again, and certainly did not come up a few months earlier in "The Trial Of Reed Richards" when Mr Famtastic is put on trial for saving Galactus' life, and Galactus himself turns up to defend him without mentioning this at all. Maybe they actually talked about collecting Beanie Babies, so he's made something else up to sound more important?

Whatever it is, the other heroes are entirely unconvinced, and when the X-Men turn up they all decide to go and fight Galactus together anyway, joined by... Mr Fantastic, who has decided that he is going to go completely against all of his own advice because he misses his son and wants to indulge in some violence. 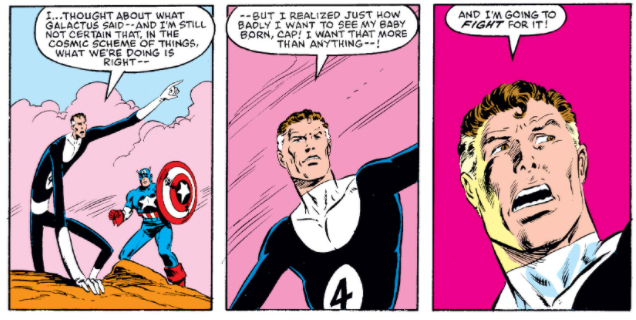 This is Brexit-level stupidity, and it turns out much the same way, as fighting Galactus causes him to fly off and devour his own spaceship to get more power to fight The Beyonder AND eat the planet. Great work everybody - I only hope they got blue passports out of it along the way!

Talking of supervillainy, while this has been going on Doctor Doom has sorted himself out. It turns out he wasn't just sitting round moping, he was having a good old think, and has come up with a Cunning Plan. 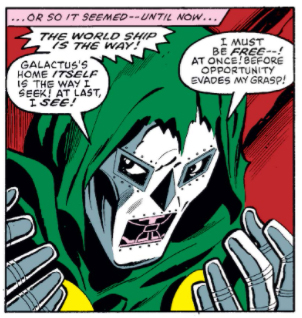 He powers up his armour by activating his "point-singularity power supply" - another device which was never mentioned before or since, and exists to solve a plot problem which could much more easily have been solved by saying "my armour has had time to recharge" or just by ignoring it. Jim Shooter really does make life hard for himself, and also for the reader! Doom stomps off to find Klaw, for whom he has a very exciting proposition. 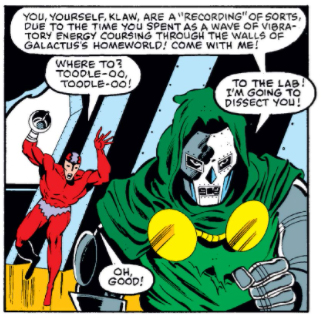 True to his word, Doom does dissect Klaw, or at least chops him up into slices in a scene that is both disturbing and disappointing - even chopped up like Salami, Klaw is still doing that incredibly annoying-oying-oying thing with his dialogue. 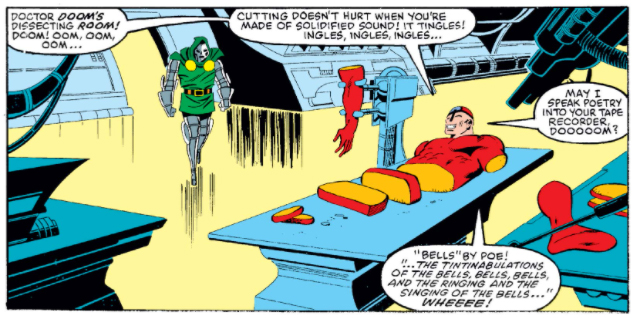 Doom's scenes are intercut with the main plot so, while the heroes make a complete mess of their fight against Galactus, Doom is somehow using Sliced Klaw to do ... something... which will enable him to ... somehow... drain Galactus' power for himself!

That's the final page - as I've said before, Secret Wars tends to have these weirdly low-key endings where it feels as if the issue has come to a halt all of a sudden without anybody realising. Doctor Doom trying to steal the power of Galactus could be something amazing, but here it comes across as a linking panel to the next page, purely procedural but with a side order of Klaw still being incredibly annoying. We'll find out whether Doom succeeds soon, but before that it's back to the main Marvel Universe for some posters!