After trudging through so many issues of "Secret Wars" and "Beauty And The Beast" it's a huge relief today to get to a comic that is actually thoroughly enjoyable to read. It's yet another of John Byrne's attempts to stamp his mark on Doctor Doom, with a re-telling of his origin story that doesn't exactly change it, but is definitely a re-interpretation. There are also developments for his supporting cast that ask a question central to this whole blog - what makes Doctor Doom Doctor Doom?

It kicks off with a very John Byrne-ish splash page, featuring a great image of Doctor Doom and a high-faluting quote from Cicero - I wonder if Byrne had a collection of "A Quote A Day" calendars that he went through to find all these? 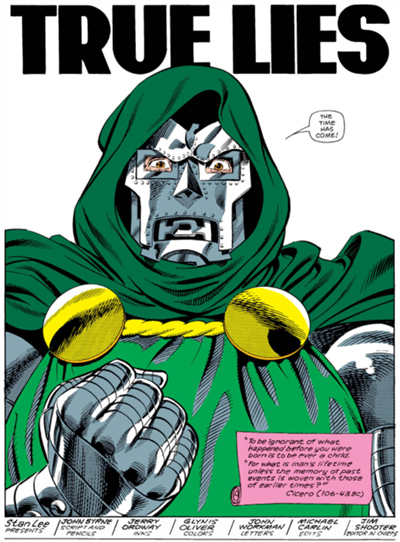 Hang on, isn't Doom supposed to be dead though? We won't have long to wait to find out what's going on, but first we follow Doom as he pops into the classroom to pick up Kristoff. When I analysed the Doctor Doom survey a while ago I found that Kristoff was the third most-mentioned member of Doom's supporting cast (excluding The Fantastic Four). This was a surprise to me as he really doesn't appear very often, at least in this era, and certainly doesn't turn up as often as Boris or Valeria, both of whom also show up in this issue.
A process blog about Doctor Doom in The Marvel Age written by Mark Hibbett