So here we are: John Byrne's final Doctor Doom story from my corpus. It's by no means his best work on the series but it does very much stand alongside the other stories where Byrne tried to fix what he saw as problems in Doom's continuity. Previous examples include changes to Doom's origin in Fantastic Four #278, redefining his relationship with Latveria in Fantastic Four #247 and tidying up several years' worth of guest appearances in Fantastic Four #258, and though this issue isn't quite such a tour de force as these others it does solve a problem that needed solving - what on earth has been going on with Doctor Doom since "Secret Wars"?

The problem started when Doom appeared in Secret Wars #1 despite having been disintegrated in Fantastic Four #260 six months earlier and very much assumed to be dead. Then, at the end of "Secret Wars", he was supposedly sent back to earth, still without an explanation of how he could be alive at all. Here Byrne not only manages to give a vaguely plausible in-universe answer but simultaneously deals with an enforced tie-in to the "Secret Wars II" sequel series, which is quite an impressive feat!

The story picks up not long after the end of the last issue, with the Human Torch attacking the Latverian Embassy in answer to a call for help from his sister's emergency flare device. Here we get the usal recap of the previous issue, and it looks suspiciously like Byrne has just cut and paste a few panels from that comic into this one. 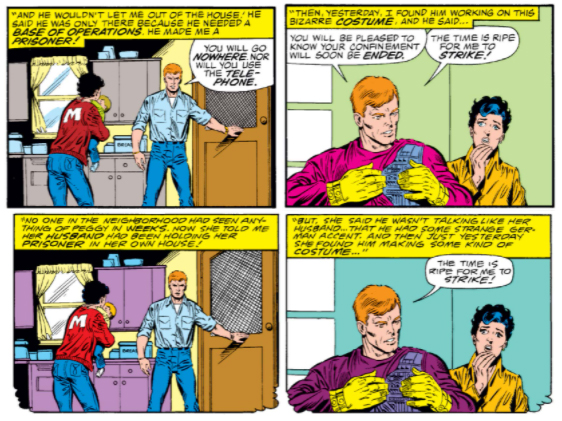 I'm used to seeing him redraw panels from other people's work as a sort of Visual Quotation, but this is the first time I've seen him copy his own work. This is getting close to the end of his run on the title, so maybe he was running out of energy - or maybe a "Secret Wars II" tie-in was something he just wanted to get done as quickly as he could?

Either way, Mr Fantastic turns up and he, Johnny and She-Hulk battle their way through some robots, at which point they meet Doctor Doom. He seems to have taken a shine to She-Hulk... 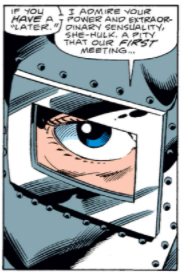 "First meeting?" But what about "Secret Wars"? What could it mean?!? Anyway, he blasts them with a "Concussion Ray" which knocks all of the FF out, giving him a chance to be even more creepy over the prone She-Hulk. 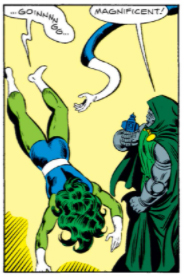 Some time later the team wake up to find that Doom has put them all, including the Invisible Woman, into specially designed prison cells, although the one for She-Hulk was meant for the Thing. Doom takes off his mask to reveal that he's wearing the body of Norm McArthur (as seen last time), but shows that inside he's still the Doom we all know when he flips out at Peggy McArthur's suggestion that Reed Richards is "the most brilliant scientist alive." 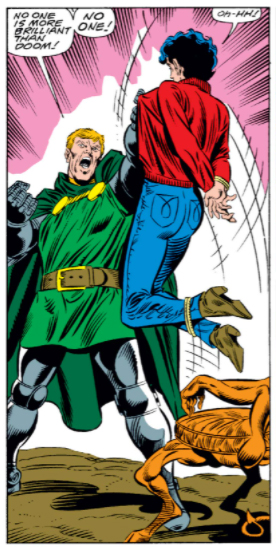 After another quick recap, during which Byrne again copies some of his own panels, this time from Fantastic Four #260, Doom reveals the cunning plan which will transfer him back into his old body. 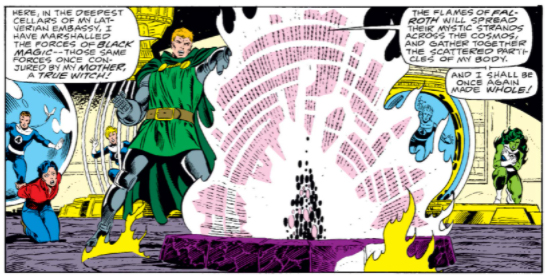 Yes, for the first time in absolutely ages he's going to use Black Magic rather than Science to solve his problems. Right from the first page of his very first appearance he's supposed to have been a master of both magic and science, but it's almost always the latter that he falls back on. 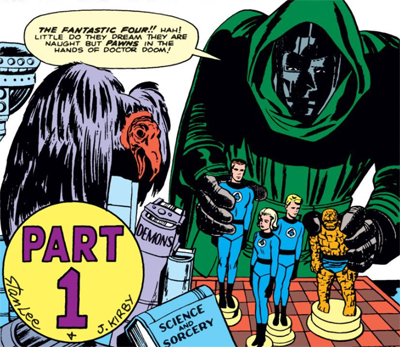 Doom's plan is to "reach out to the farthest corners of space and time to summon... the greatest power in the universe." The FF react in horror, as they all assume that this greatest power will be exactly who it turns out to be - The Beyonder! 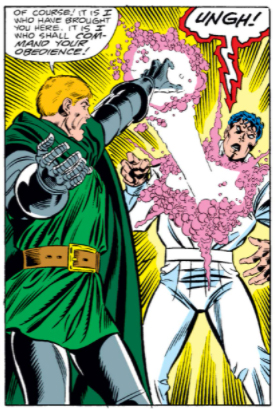 They seem to be confident about this, but I wonder who Doom himself thought he'd be getting? Apart from there surely being greater powers than The Beyonder, like Eternity for example, we'll soon discover that Doom does not even know who The Beyonder is, despite supposedly stealing his power the previous year on Battleworld. There's even more confusion when The Beyonder claims not to know who Doom is either, and Reed Richards is called upon to try and explain what's going on, which involves yet another recap, this time of the much-recapped original "Secret Wars" series. 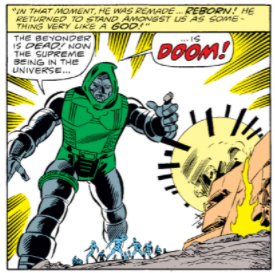 Reed realises that The Beyonder is judging the Doom in front of him based on his "true body's aura", rather than what he says, does, or acts like. This seems a bit daft to me - surely "the greatest power in the universe" would have looked a bit more closely - but it makes The Beyonder look again and realise that yes, this is the same person who nicked his powers not so long ago. He's about to destroy Doom once and for all when Reed interjects again with a whole lot of dialogue, during which he finally gets The Beyonder to explain how Doom could be on Battleworld in his true body when he was meant to be dead at the time. 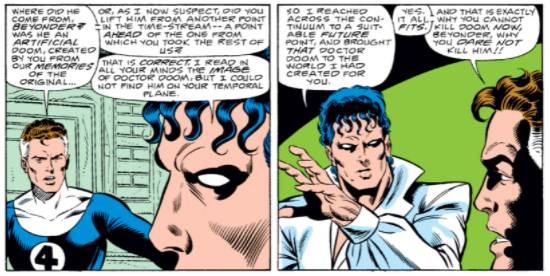 Aha! I see, that's why we had to go through all the rigmarole with The Beyonder not recognised Doom in this body - it was so that Reed Richards could work out the whole timey-wimey thingy. It feels a bit of a long way round, but I guess it's about as elegant as it's possible to make what, when all's said and done, is a huge exercise in No-Prizery!

So, the Doom we saw in "Secret Wars" was taken from the future, but that still doesn't help us because the current Doom is still in the wrong body. Thus we get even more hands-on continuity fixing as The Beyonder recreates Doom's true body, swaps his and Norman McArthur's minds back again, sends this recreated Doom back to fight in Secret Wars, oh, and also wipes his recent memory so he can't remember what's just happened here. 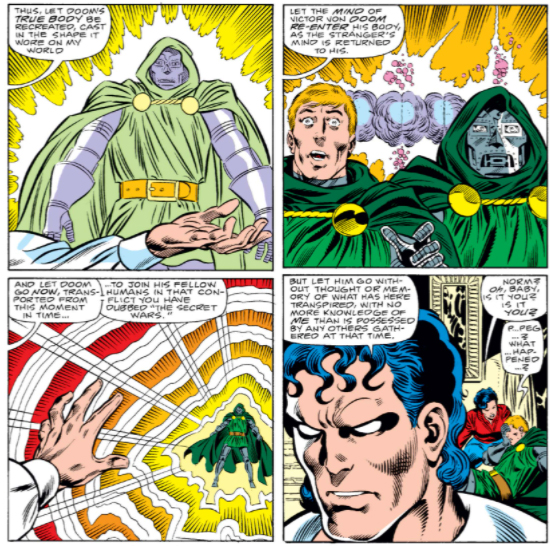 Phew! That was some pretty heavy lifting, which seems to have fixed everything... except where did Norm McArthur's mind come from? He's dead too isn't he? Did The Beyonder put it in Doom's original body when he recreated it, so it could be swapped over? Maybe he realised that he was already going on a bit, so decided to skate over that section. For this mercy I thank him!

With all of that finally sorted out The Beyonder decides to clear off back to his own series, leaving one last bit of continuity to sort itself out - where did actually Doom disappear to at the end of "Secret Wars"? 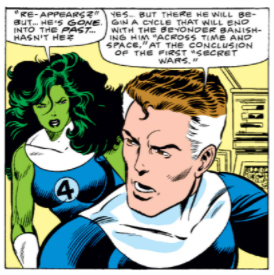 I love the way Reed refers to their time on Battleworld as "The first Secret Wars", almost as if he knows that there's a "Secret Wars II" series going on right now. Maybe the version of Marvel Comics that publishes the in-universe adaptations of their adventures has been sending him comp copies? Whatever the reason, he knows enough to tell everyone to get out quick, just in time for the real Doom to start to materialise, finally back in his own body and the main continuity again. 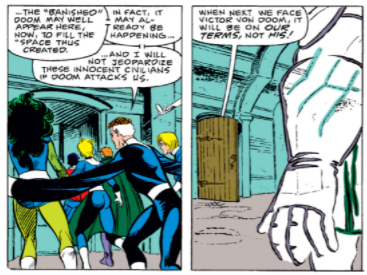 And that's the end of the story, the long-running plot-hole, and John Byrne on Doom for our corpus. As I said at the start, it's not his best work and it's a shame that he's had to spend two whole issues trying to work this all out, but now it's done we can hopefully never mention "Secret Wars" ever again.

Next time, we're taking a trip into a whole other form of media, as we look at the Marvel Role Playing Game based on ... oh bugger. It's "Secret Wars"!