The Alien, The Ally, And... Armageddon!
Doom hasn't been seen in The Fantastic Four for over two years, apart from the brief appearance of an android duplicate in Fantastic Four #100, but here he finally returns to his home title, after much wandering across the Marvel Universe, for a story which brings the full range of his character developments into sharp focus.

Reed Richards has been kidnapped and mind-controlled by a being called The Overmind, last of the Eternals. The Thing and The Human Torch set out to find him, eventually discovering Reed fighting back against his kidnapper. The pair try to help but get thoroughly beaten, leaving The Invisible Girl to turn up and discover, to her horror, that her husband is completely in thrall to the alien villain. She heads off to look for help from other superheroes, only to find that they're all otherwise engaged or out of contact. 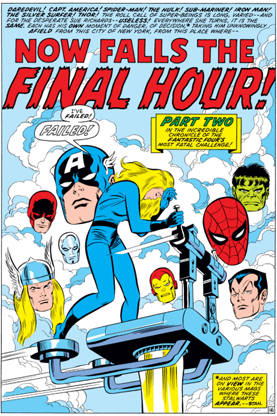 Apart from showcasing the breadth of the Marvel storyworld, and suggesting that interested readers can find out exactly what the other heroes are up to by buying their associated books, this also answers the constant question asked by fans: why don't superheroes ask each other for help when they face a bigger than usual threat? Turns out they do, but everybody's always busy!

Wracked with despair, Sue pauses her hoverbike on a rocky shore, where she sees a vision of Agatha Harkness, Spooky Nanny to her son Franklin, who suggests another candidate via the medium of Spooky Vision. 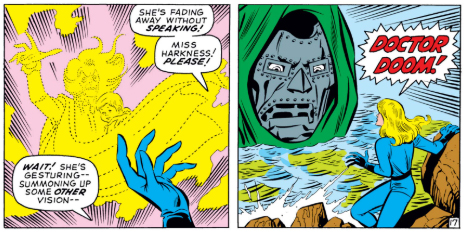 Doctor Doom! Sue thinks about it for a moment and decides to give it a go, heading off to the Latverian Embassy (where Doom always seems to be at home, when not in his own stories). On arrival two goons refuse to let her in, so she jumps through the window to find Doctor Doom... vaping? 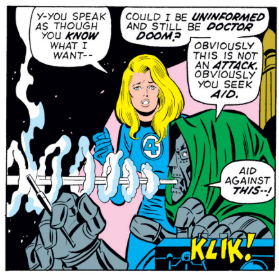 She asks him to help them fight the Overmind but he refuses, saying his only regret is that someone else is destroying the Fantastic Four. Sue then says something that cuts Doom to the quick and, perhaps, speaks to any readers who've been following his development over recent years. 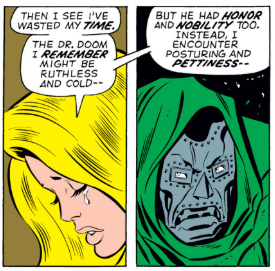 Could this be a recognition, in the text itself, of how Doom's character has changed, especially when appearing as guests in other character's series? We've seen hints of his complex, tortured character when he's been in the lead role of his own stories, but otherwise he has very much put aside the honour and nobility shown in his origin story, in favour of posturing and pettiness.

As ever, Doom's pride gets the better of him, and he agrees to help, setting off with Sue to discover Ben and Johnny lying unconscious, utterly defeated. When they wake up to see Doom standing over them they spring into action, and are shocked when Sue tells them what's really going on. 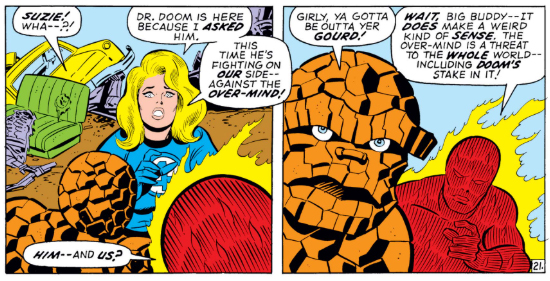 They reluctantly agree to fight alongside him, and return to battle. Doom works out a strategy which the others follow and, rather brilliantly, it totally works, until the possessed Reed Richards returns and takes Sue out of action. This leaves Doom to fight alone, unprotected by her force field, refusing to give in. 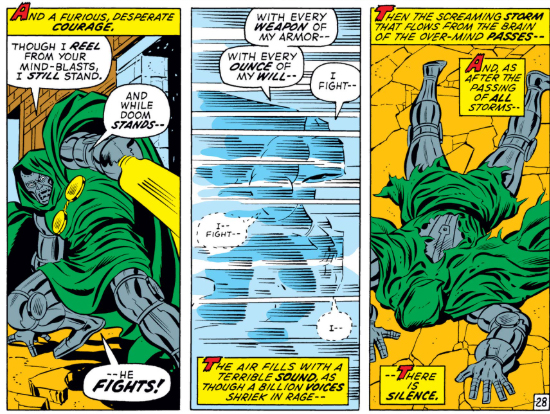 We've seen a lot of Doom ranting and raving lately as opponents fly off without finishing a fight, but here he's clearly behaving heroically, sacrificing himself to stop a major threat.

At this point The Stranger, another cosmic being, arrives, tells The Overmind that he's too great a threat to the universe, and sends him into exile into a subatomic void before leaving as quickly as he'd arrived. It makes the efforts of Doom and the FF seem utterly pointless, as the Human Torch himself complains. 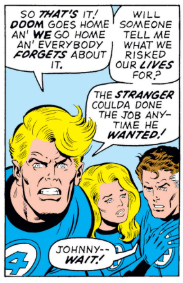 The whole team wake up, with Reed himself again. Sue looks over to check on "poor Doctor Doom" who is absolutely fine, thank you very much.

The story ends with The Watcher turning up to tell them that, actually, it wasn't as pointless as it seemed. The Stranger only knew The Overmind had returned because he'd been forced to exert his full power during the battle, alerting The Stranger to what was going on. Basically, they were hopelessly outclassed but the fact that they - or rather, Doctor Doom - tried really hard made someone much more capable notice.

It's an unsatisfactory ending to a story which has shone some very interesting light on the changes Doom has gone through, and the fact that other characters have noticed. Will this be reflected in his future development? Tune in next time to find out!
posted 13/12/2018 by MJ Hibbett
(click here for permanent link)
(0) comments


... Though Some Call It Magic!
After all the unexpected enjoyment of Doom's guest appearance in The Incredible Hulk we return to Astonishing Tales for the final story in the run of his own series, which is called either "Some Call It... Witchcraft!" or "...Though Some Call It Magic!" depending on whether you believed the cover or the splash page. Or perhaps it's both together?

Whatever it's called this is an absolute stone cold classic story from Gerry Conway and Gene Colan, building on their own previous work and that of others to give us a beautifully written and drawn story that sheds light on a brand new aspect of Doom's character that would have repercussions for years.

It starts with Doom being called for by his manservant Boris, a character introduced in Doom's origin story back in Fantastic Four Annual #2 and only seen since in the re-telling of that story in Marvel Superheroes #20. Returning to the interpretation of Doom as the heroic, misunderstand leader of his people, is Conway's attempt to move him away from the deluded lunatic we've seen in recent stories, and show once more the tortured man behind the mask. 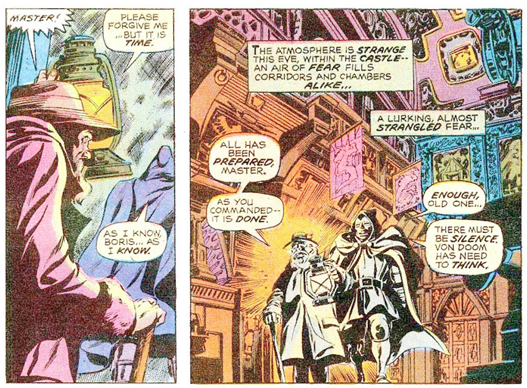 This is demonstrated when the two characters make their way to an "old oaken door" and, in his thoughts, Boris reveals a very different Doom to the one we've seen lately, whose voice has always been "calm". 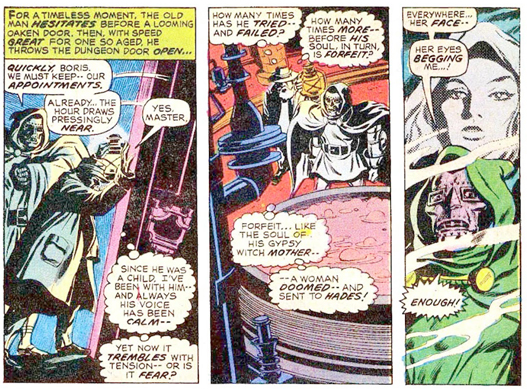 These seems like a wildly inaccurate view of Doom's behaviour, but perhaps Boris has seen a different side to him that the one we've seen screaming and shouting at adversaries over the years? Here he is behaving much like Alfred does with Batman, nominally a servant but acting more like a worried parent.

Outside the people of Latveria watch the castle in fear. They explain to a young woman (who has been "abroad") that every Midsummer Doom engages with dark forces in an attempt to free his mother from hell. 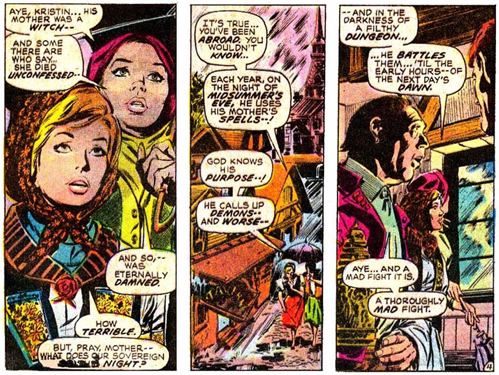 The fact that Doom's mother was a witch has been mentioned before, but her damnation and his annual battles to save her are new information.

We see Doom beginning the process of this fight, by summoning up... Satan! 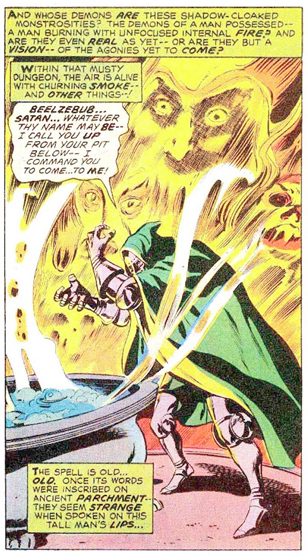 It's a bit of a shock to see The Actual Devil named as such here, as usually Marvel prefers to call him "Mephisto". There's a bit of badinage between Doom and Lucifer, before Doom requests that they get on with it. The deal, apparently, is that Doom fights a monster of Satan's choosing and if he wins his mother will be freed from hell.

Kagrok The Killer is summoned, a Gollum in bandages basically, and he and Doom do battle, with Doom very nearly winning, right up to the moment when... he doesn't. 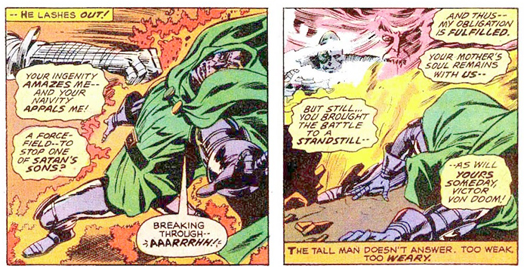 Satan disappears, taunting Doom with the promise of a rematch next year, and Doom leaves the room, falling into the arms of a waiting Boris. 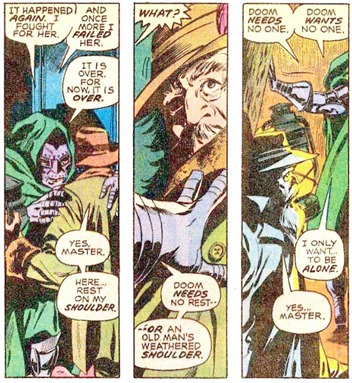 This is a beautiful bit of characterisation from Conway and Colon, with the severely weakened and distraught Doom accidentally allowing himself a moment of humanity with one of the few people left who knew him as a child and, apparently, remain genuinely loyal to him now, before realising who he is and refusing human contact once more. The story ends with Doom stalking off alone once again, promising to do better next time. 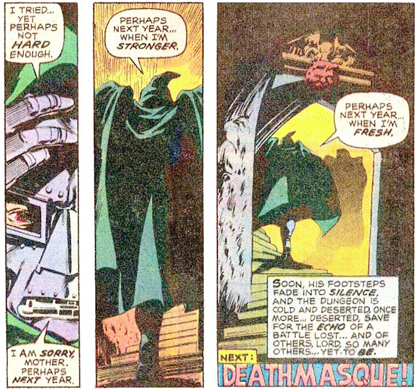 As I say, it's a classic story which will inform the development of Doom's character right up to the present day. It also ends with the promise of a story called "Deathmasque", leading one to believe that there was meant to be another solo Doom story. If they'd all been as good as this one it would have been amazing, but it was not to be, and readers would have to wait several months for Conway and Colan to continue the tale as promised.