Countdown To Doom
In order to watch Doctor Doom's appearances in the 1981 "Spider-man" cartoon I bought a three CD boxset of the series on eBay. I was quite pleased to be able to watch it on my television, rather than laptop, but distressed to discover that, for some reason, this episode wasn't included. It's an awful shame, as this marks the climax to the whole Doom storyline - and it's great!

The episodes starts with Peter taking his Aunt May to watch a NASA space launch. We're reintroduced to the scientist we meant at the end of Canon Of Doom, who now gets a name. He's called Doctor Zoltan, and he's sending Doctor Doom's laser cannon into space. When a reporter - quite understandably - asks why he's doing this Zoltan storms out.

The countdown commences, but nobody thought to tell the guys who were filling the rockets fuel tanks, and they end up stuck in an elevator with the rocket about to go off. Luckily Spidey is there to save them - a "strange twist of fate" according to Doctor Doom who, we discover, is watching the whole launch from his base. 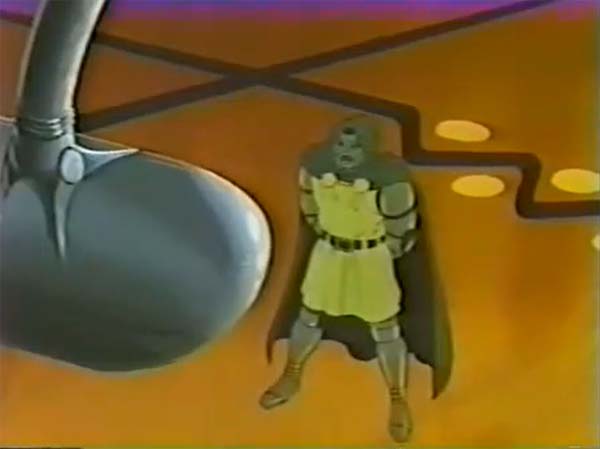 Doom looks in on his old friend Boris who, we remember, attempted to stop Doom the last time we saw him. i'm really enjoying the attention to continuity in this series, which continues when we go to the cell next door to find Johann planning a prison break. 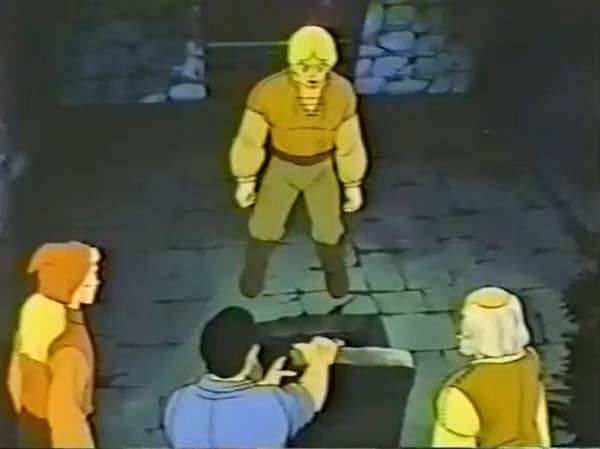 Doom calls Boris to his view screen to show him his plans coming to fruition, as a "mysterious tracking beam" forces the launch off course. While everybody at NASA is trying to save it, Aunt May notices Doctor Zoltan switching off what turns out to be the auxiliary tracking computer. 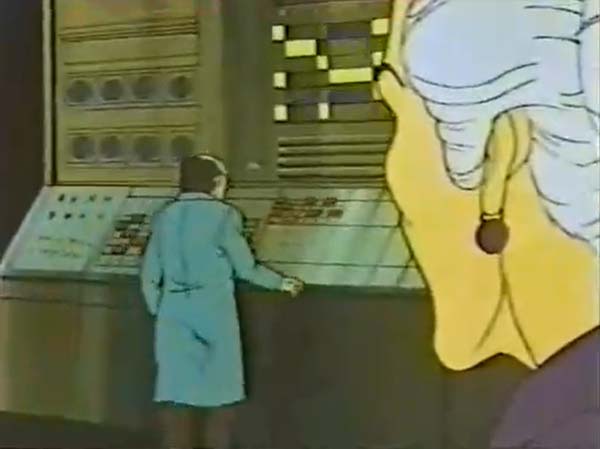 She tries to warn the scientists, but they don't want to listen to her. Maybe they should be a bit more humble - they have, after all, just launched Doctor Doom's laser cannon into space for him. You would have thought someone somewhere might have at least done a Risk Management Assessment and decided that there was the possibility of this plan going hideously wrong, wouldn't you?

Doom uses the laser cannon to ignite a ring of volcanoes around the pacific ring, as is his wont. The power of these explosions causes the Earth to move out of orbit, heading away from the sun. The only person who can now save "Spaceship Earth" as he (brilliantly) calls it is, of course, Doctor Doom! It is "the ultimate blackmail". "Only I can keep it from a new Ice Age!" he declares.

NASA receive a fax which informs them that the tracking beam came from Latveria (who'd've guessed?) and we get a handy infographic showing how igniting the volcanoes again could act as a motor to push the earth back into place. 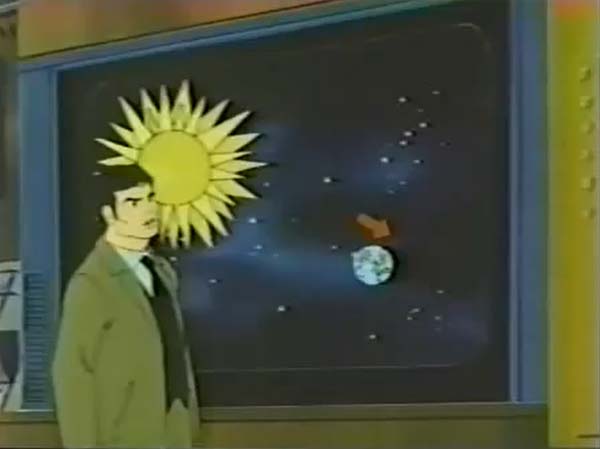 "But only Doctor Doom can push the Earth back into place" says Doctor Zoltan, which (finally) tips Spidey off that Zoltan was involved. His name's Zoltan, surely that was clue enough?

The French ambassador arrives and offers Spidey a lift in his plan, dropping him off in Latveria on the way home. Meanwhile, a rowdy meeting at the United Nations is interrupted by Doctor Doom. "The world is filled with war and hunger, with violence and petty greed. You have done nothing to change that. I offer the world a better way," declares Doom. All they need to do is to declare him ruler of the world, or the Earth will freeze. 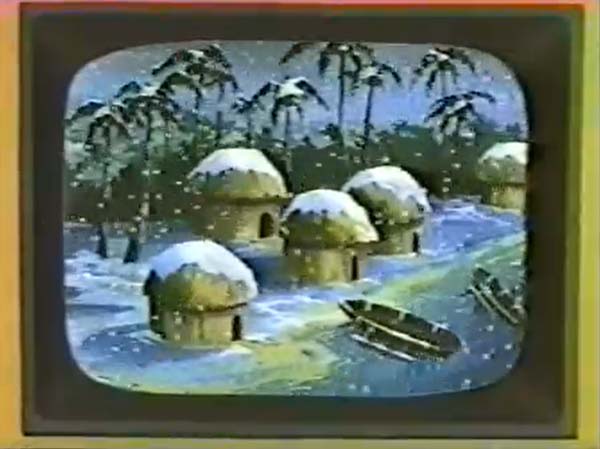 A TV announcer, some hours later, tells us that so far the UN has completely failed to come up with an answer, which makes a change - usually they give in straight away. Latveria, meanwhile, is covered by a "radar blanket" so that "not even an insect could cross the border without being detected by Doctor Doom". This is a neat segue to Spidey jumping out of a plane and parachuting into action, where he is detected by the robots administering the radar. 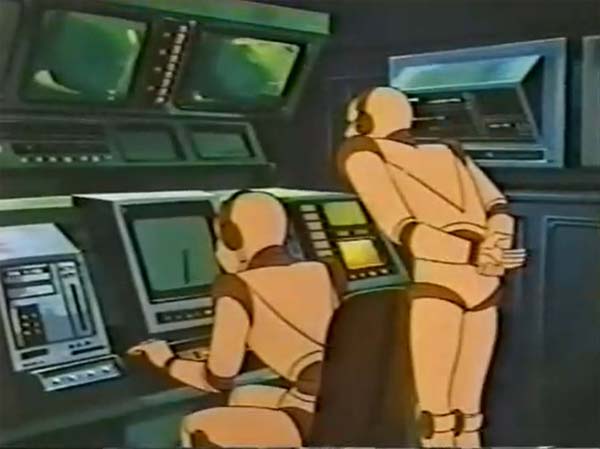 Again, it's great to see the same design of robots being used throughout the series. Spidey makes a web ballon which, apparently, confuses the radar, then creates some sort of cocoon that allows him to float down the river towards the secret resistance base that he remembers from last time. I'm not quite sure what the plan is, but I don't really mind!

The United Nations, meanwhile, has finally come to the conclusion it always comes to and has decided to give in to Doom's demand and declare him "Master Of The World". He swings into action immediately, activating robot duplicates of himself (what we would usually call Doombots in the comics) all around the world to take over every government, including, inevitably, the United Nations. 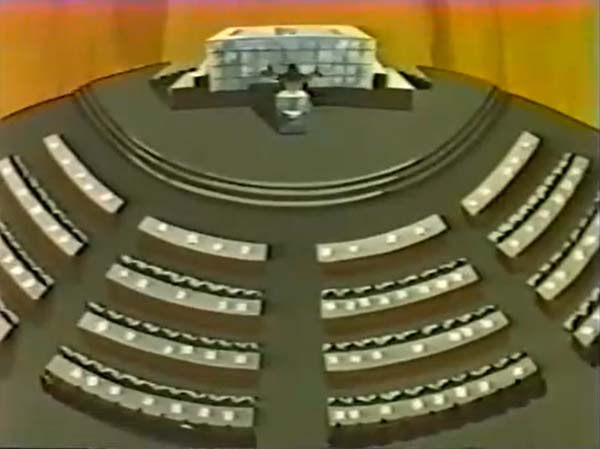 It's amazing how often this happens isn't it?

He disbands the UN, and explains to Boris that he wanted him to see all of this, so he knows what he gave up when he betrayed him. This is a great piece of characterisation - Doom is showing one of the few people he has ever cared about how deeply he feels in his own twisted way. However, this isn't Boris - it's another robot duplicate, who explodes in Doom's face, leaving only pieces behind! 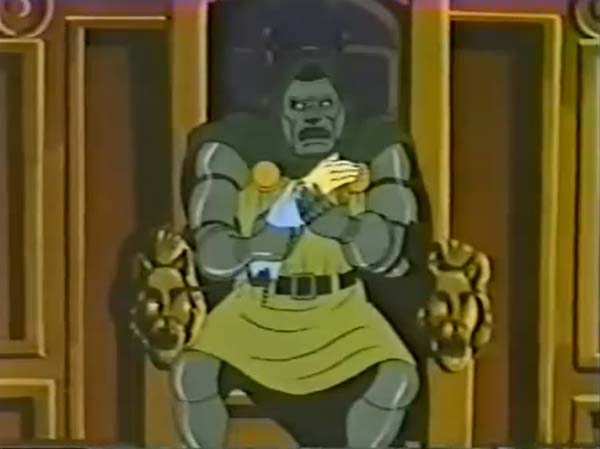 "A robot?!?" says Doom, finally getting a taste of his own medicine. "Hmm! It seems Boris, I taught you too well."

Meanwhile, down in the caves, Spidey meets up with the resistance, who are very pleased to see him. Together they head to the castle, where they taunt the robot guards into leaving their posts so that Spider-man can web himself inside. Somehow he manages to avoid all Doom's security and get into the throne room. Doom tries to blast him, but Spidey manages to reprogram the laser with a single web, so that it zaps Latveria instead. 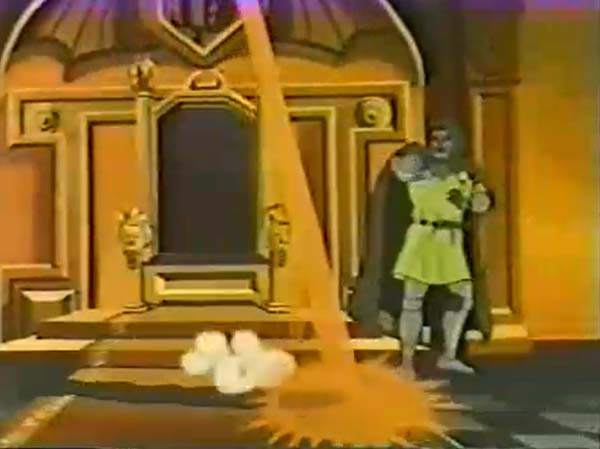 That was awfully clever of him! The laser hits Doctor Doom, who instantly explodes, as does the laser cannon, and then all the Doombots fall over. 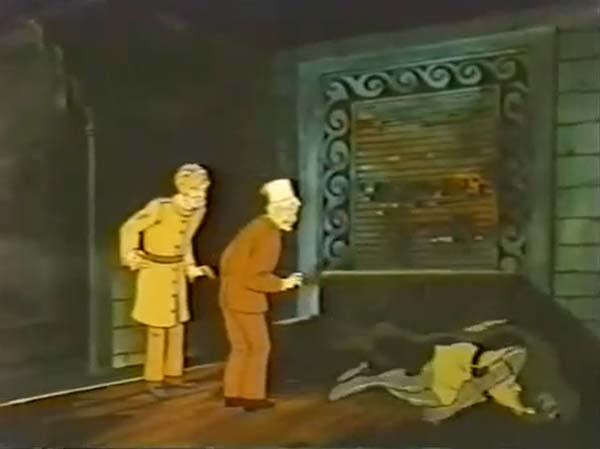 Oh, and the earth moves back into place too. Well done Spidey!

There's even more good news in Latveria, as Doom is now deposed and the quaintly dressed people carry Johann aloft through the streets as their liberator. 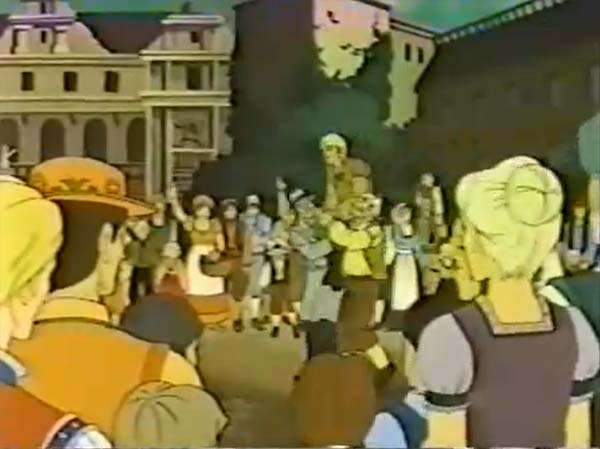 The episode ends with Spidey climbing up the side of the United Nations building as all the lights come back on again. "Some days it feels good being your friendly neighbourhood Spider-man", he says, and that's it - the end of the show and the end of this storyline. It's a great way to mark the climax of what has been far and away the best ongoing portrayal of Doom we've seen - I would say - in any portrayal outside of the comics. I wish there'd been another series!


The Doom Report
Last time in the "Spider-man" cartoon we saw Doctor Doom flying away from New York after his latest plan (very similar to his usual plan: take over the world via blackmail of the UN) failed... or did it?

This episode picks up not long after the last one, with the freed revolutionary leader Johann fleeing from a bear. He's saved by a group of people who, going by their clothes and the way they say "Sacre Blue" are meant to be French. 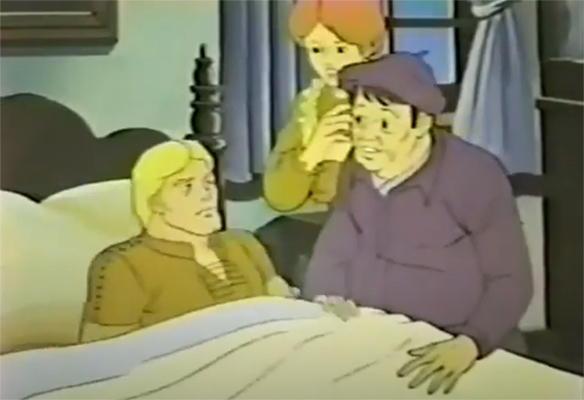 France, a country reknowned for its wild bears!

As we saw last time, it was Doom's faithful manseervant Boris who freed Johann, and for some reason he thinks it's a good idea to confess this to his boss. "I have served you faithfully for 30 years" he says, and Doom agrees that this is the first time he has failed him. "We will speak of it no more," he says. "Leave me now."

Just as we're thinking "Eh? What? Doom being reasomable?" he zaps the floor beneath Boris's feet with his gauntket, sending him down to the dungeons. "If we were not old friends, I would not have missed." 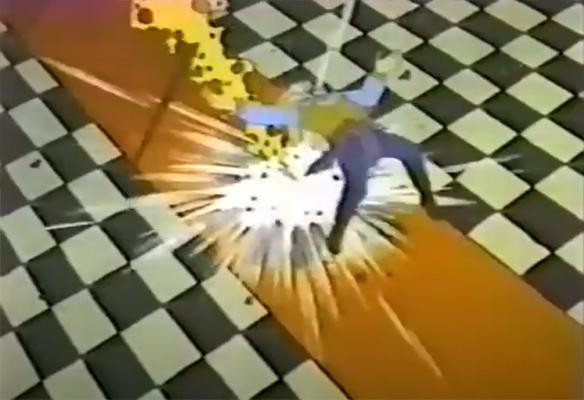 That's more like it! Johann, meanwhile, has made it to New York. He meets with some members of the Latverian undergound, who are a bunch of massive racial stereotypes - they're a group of gypsies, including both a fortune teller and a fiddle player! 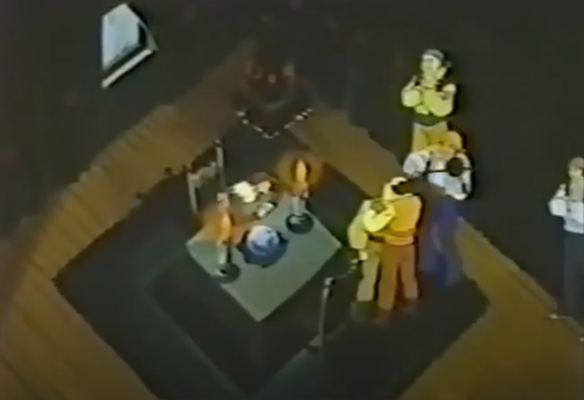 Joachim, their leader, asks for the names of the people who Johann would like to contact back home, and then when Johann sets straight off to talk the newspapers Joachim recommends The Daily Bugle because, as he tells the fortune teller, the Daily Bugle is very unlikely to report anything bad about Doom. Oh no! The underground is secretly in Doom's control!

Once again with these stories, the cartoon's titular hero takes a back seat to Doom, and Spidey only appears five minutes in, foiling a bank robbery which - oops - turns out to be a movie set. What are the chances eh?

Then it's straight back to Johann, who is surprised to find J Jonah Jameson refusing to print his story, declaring that "Doctor Doom is the greatest man who ever lived!" Peter Parker hears the story and takes Johann home with him, where he sets up a recorder to record his story. When it's done he pops the tape round to the Bugke for Betty to type up (because that obviously is a woman's job...) and returns home to find Joachim and the fortune teller have entered the house. Once they hear where he's been they go back to the Bugle to kidnap Betty. Peter discovers this and gives chase as Spider-man, rescuing Betty just before the group of racial stereotypes drive their car into the river. 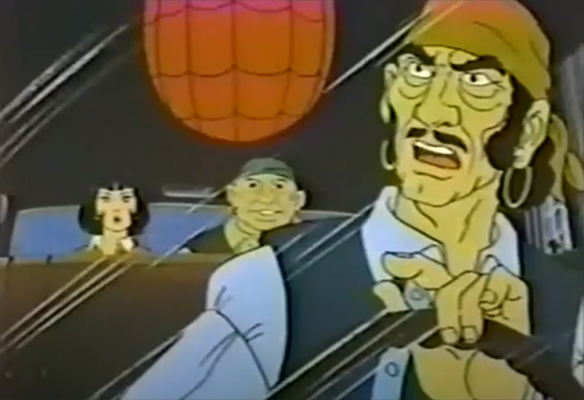 Peter and Betty hand the story on to other newspapers, who happily run it on their front pages, next day. This includes that prestigious periodical, Newspaper News! 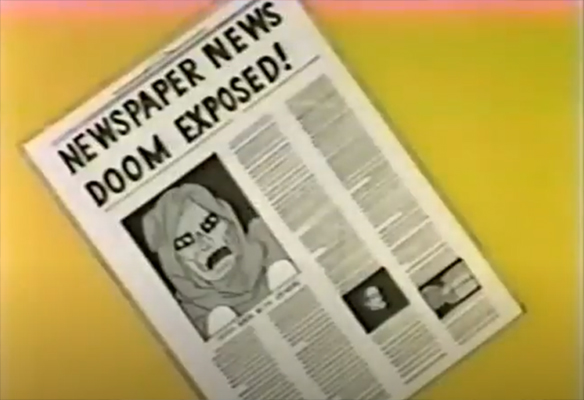 "I hear the UN's going to put Doctor Doom on trial" says Peter, demonstrating once again that the UN in this universe works very differently to ours!

Johann rings to tell Peter that he's leaving for Latveria tonight to begin the revolution, so Spidey dashes off to join him, suspecting that the Latverian spies are involved. He's right, of course, and as soon as they take off Doctor Doom takes radio control of "The Doom Special", via comlink.

We haven't visited the United Nations yet, but that's soon rectified when go over to see the vote on Doom's trial (which seems to have happened at high speed) interrupted by Doom himself, appearing on the video screen above them. 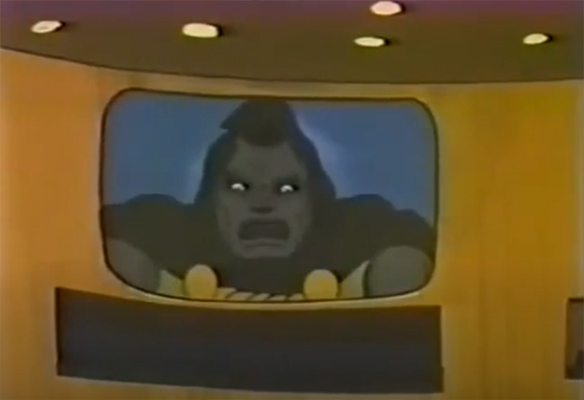 I'm forever saying how similar these cartoons are to the comics in their portrayal of Doom, and this use of video appearances is a great example of that. He threatens the UN with "giant Tesla coils" which can "produce rays anywhere on earth" - rays which can provide food or, if he is not obeyed, "rays for death!"
A process blog about Doctor Doom in The Marvel Age written by Mark Hibbett