... And Dust To Dust!
Is it me, or is Secret Wars suddenly Quite Good Fun? After about nine issues of it being utterly awful, it was quite a surprise last time to find myself actually enjoying it. Maybe getting close to the end meant that the creators felt they could finally get stuck into the proper story... or maybe it's just that Doctor Doom's in it a lot more now!

The front cover echoes the cliffhanger from last time, with Doom standing before the astonished heroes, unmasked. At last! We're going to see what he really looks like, and it is... quite pleasant? 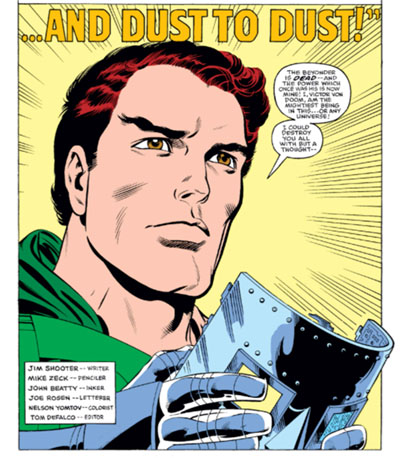 For a character whose face we very rarely see, Doom's features are remarkably consistent, right down to his untamed eyebrows. The heroes are wary of this new version of Doom, as are the villains who are watching from close by. There is a LOT of discussion about what to do, as seems to be the rule for this comic, before Molecule Man decides he's had enough and sets off to kill Doom. First of all he rips out the piece of ground the superheroes are standing on and chucks it into space, and then confronts Doom, who reacts very nonchalantly. 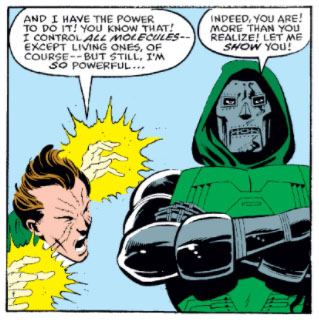 He uses his new cosmic powers to show Molecule Man "the foundations of eternity" which do not look quite as exciting as one might hope. As I've said before, Mike Zeck is not really the best artist for this sort of thing, and depicts The Foundations Of Eternity as a vector-based arcade game from the 1980s with some pink gloop on it.

Doom removes Molecule Man's mental blocks so that he can now do pretty much anything, and he starts off by taking all the villains back to their base. The heroes, meanwhile, make their way down from the edge of space where Molecule Man chucked them and gather together for yet another long talk where they tell each other things they all already know about how they got there.

The villains are now sat around in Volcana's house in the chunk of Denver that the Beyonder pinched as part of Battleworld, where Molecule Man hits upon a plan: he's going to get them all home simply by flying the suburb through space back to Earth. 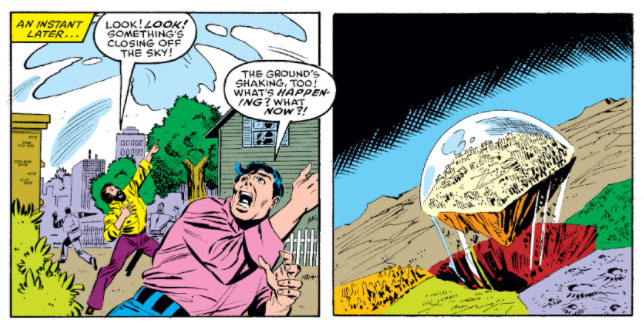 In the general scheme of things this sounds pretty sensible to me. We then get some more of the awful Colossus sub-plot, with him zooming off to see Zsaji on a flying moped. When he arrives at her village, a few pages later, he creeps into her room, terrifies her, and then gives her some flowers which, I assume, he picked up at a nearby 24 hour Space Garage. 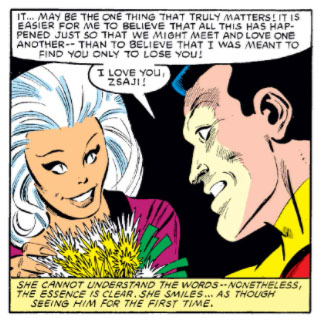 Later still we find him smooching with her on a hill, wearing just his superhero pants and big boots. 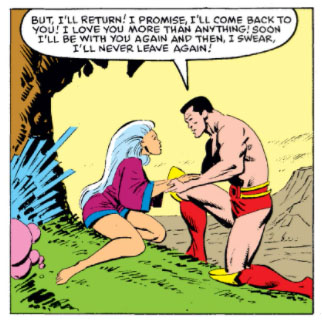 While all that's going on Doom sneaks into the heroes' base to collect Klaw and leave a summons in twenty foot high writing on an internal wall. Why he does this rather than teleporting them I do not know, but then I do not have Cosmic Powers so I suppose people who do roll differently to you and I.

The heroes go to see Doom as asked, and he tells them that he is a changed man, and that when he slayed The Beyonder "in a way, Doom died as well". 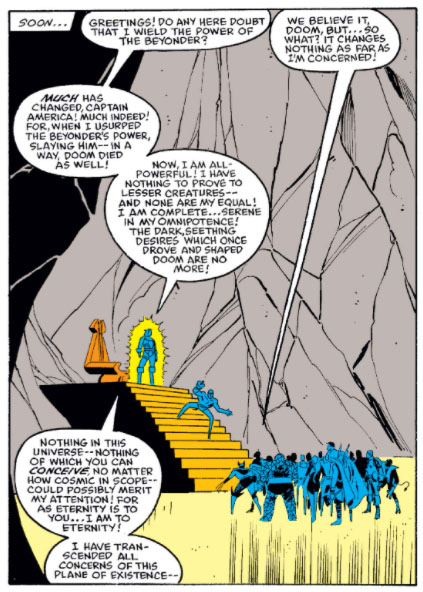 This is actually Quite Interesting in character terms, as he goes on to say "Now I am all powerful! I have nothing to prove to lesser creatures... I am complete... serene in my omnipotence! The dark, seething desires which once drove and shaped Doom are no more!" I think that that shows a pretty good understanding of what makes Doom tick. His need to constantly prove his superiority to others has come up again and again in this blog, and indeed in the Research for my PhD, so it's great to see it being echoed by Doom himself, and Jim Shooter, here.

He says he's going to set right some of his most recent crimes, and kicks off by restoring Kang The Conqueror to life. He then offers the heroes anything they like to make up for his Being Doctor Doom so much, and Spider-man suggests (very sensibly) asking him to send them home. Mr Fantastic, rather huffily, says there's no need to get Doom to do it as he, Reed Richards, is perfectly capable of doing it himself actually. Clearly the competition between him and Doom isn't as one-sided as it's sometimes made out to be! 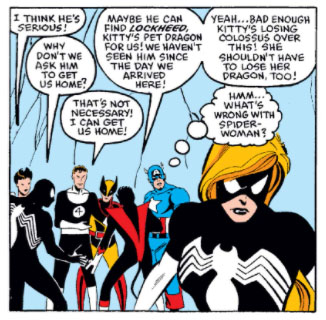 Captain America says thanks but no thanks, and the heroes all leave. When they get outside he takes the register and realises that Spider Woman is missing so goes back into Doom's new palace to find her. He stumbles into Doom's fancy living quarters, and they have a nice chat about Doom's past.

While they're chatting (there sure is a lot of chatting in this series) Klaw is sent to find Spider Woman, and gets zapped by the same Mysterious Thingy that zapped both her and Hulk. With all that done the heroes head back to their base again, and it's time for that most exciting of all set pieces in the whole Superhero genre: a big meeting! 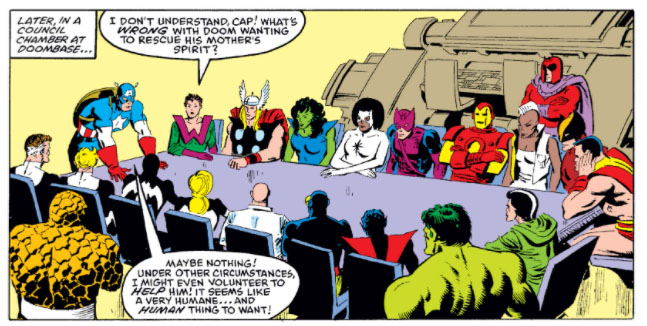 The top item on the agenda is whether Doom is evil or not now, and whether they should go and fight him because of it. Everyone sticks their oar in and everyone agrees it's a good idea to have a fight with the cosmically powered super-being who's recently offered to send them home. Only Colossus doesn't speak, and Captain America says that he must give his opinion because "it must be a unanmimous vote... or we do nothing!" I am very glad Captain America does not run meetings that I attend, otherwise they would never end.

Just to put more pressure on Colossus, he adds that this could be very dangerous. "If we do decide to confront Doom, it's possible that we might be annihilated on the spot by a bolt from the blue!" 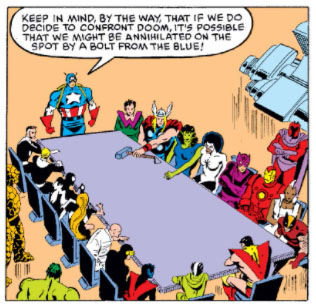 Ha ha, good one Cap, as if that would happen! Colossus has a bit of a cry about the fact that saving the Universe might mean he can't creep into the darkened bedroom of a woman he's only just met, and then very bravely agrees with the plan. It's unanimous: they have decided to confront Doom!
A process blog about Doctor Doom in The Marvel Age written by Mark Hibbett