With Foes Like These...
Today we're looking at yet another single panel flashback appearance by Doctor Doom, and once again it's all to do with Secret Wars.

When this issue came out it was about 18 months since the last issue of the original "Marvel Superheroes Secret Wars" series, but its importance to the shared Marvel storyworld is clear from the way it keeps on popping up, explaining costume changes, changes to team line-ups and, as here, the introduction of new characters. A big chunk of this story is about the relationship between Titania, who got her powers on Battleworld, and long-time Thor villain The Absorbing Man. We've looked at stories about quite a few couples recently, like Cloak & Dagger, Dazzler and The Beast, and Volcana and Molecule Man, and they have been pretty much universally awful, as if they were written by a very angry alien teenager who had based all their knowledge of human relationships on daytime soap operas and furious poems about how they're happy on they're own so please stop asking if I've got a boyfriend/girlfriend. In many cases I've expected to see an editorial note clarifying the point that they never asked to be born, GOD YOU'RE SO BORING.

However, Tom deFalco manages to write this pair, and all the other relationships in the issue, as if he's had at least a nodding acquaintance with human beings and how they work, while the art looks very pleasant in a late 80s/inked by Bob Layton sort of way, not least because it's inked by Bob Layton. We find ourselves thrown into the middle of several stories all going on at once, as seems to have been the trend for continuing series at this point, with Flash Thompson on the run from the police, Titania and The Absorbing Man arguing about their attempts to go straight, Peter Parker's ongoing work problems and weariness with superheroics, MJ's career in modelling, and the ongoing mystery of The Hobgoblin. 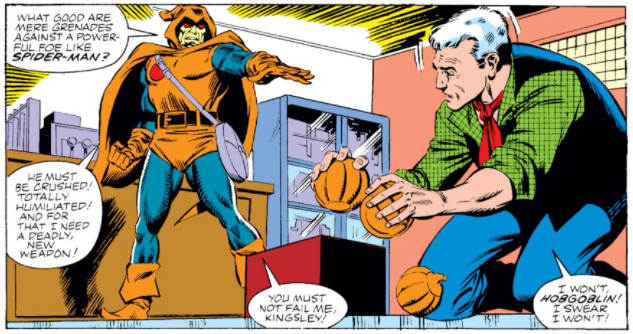 There's a LOT going on, also including a guest appearance by The Wasp, a Policeman With A Secret, and a big fight at an airport. It's all very nicely written and drawn, but dipping into so many stories without much explanation and with no resolutions at all feels rather alienating. Jim Shooter was very keen on the idea that every comic was somebody's first comic, and should be written with that in mind, and though this is very much not my first comic it does feel as if the only way to get anything out of it would be to read the entire run of the series for a couple of years either side, and there's nothing interesting or exciting enough to make me want to do so.

To put it another way: this comics feels like another harbinger of 90's Comics!

It's interesting that this is all done in a single panel, with a note just pointing out that it happened in Secret Wars, as if that's all the information that's needed to explain what's going on. There's an expectation that anybody reading this will know what Secret Wars was, and so no further explanation is necessary. I guess that was probably true, and to be honest I didn't notice this assumption at all the first time I read it. I'm not always onboard with the idea that you HAVE to explain every single thing in a story, as sometimes it's exciting to be thrown into a fully functioning fictional world and have to work out what's going on for yourself, but here it feels more like a lack of concern for anybody who's not already on board. As I say: here come the 90s!

That's the lot for Doom this time, but stand by for more Doom in a single text than I think we've ever had before, as next time we finally get to "Emperor Doom"!


The Lady And The Unicorn
I've spent a lot of the past four years banging on about 'The Marvel Age' as a distinct period in superhero comics, and have gone so far as to Empirically Define it as being all American superhero comics with cover-dates from November 1961 (the first issue of Fantastic Four) to October 1987 (the last month with Jim Shooter credited as editor on all Marvel comics). If you ever see me out and about in The Real World I will be more than happy to bang on about it in person as well, or you can see me talking about it next month at Factually Accurate Stand-Up, but the basic idea is that this covers the time period in which Marvel emerged as first the creative leader in superhero comics, then the market leader, and then finally lost that creative lead under Jim Shooter.

One question that has arisen from this is 'So what comes next?' My standard answer is 'Not my problem', but if I was forced to answer I would probably suggest something similar to what people call 'The Dark Ages', when Marvel went bust, gimmicks were everywhere, and big name artists like Rob Liefeld came to the fore.

We get a little hint of this future in today's comic, mainly due to the artwork by Art Adams. I don't think he's usually roped in with people like Liefeld and Jim Lee, but his hugely detailed, super-stylised work, especially when drawing women, comes as a bit of a shock after reading a quarter century of Kirby-inspired superheroics.

I must admit that I dropped out of superhero comics around this time, mostly because I was a student and couldn't afford to buy them anymore, but whenever I popped into a comic shop during my time of absence I can't say I was hugely impressed by what I saw. Looking back now, I can appreciate this style of art as something exciting and dynamic, even though I don't really like it myself, but what I can't get over is how turgid the writing would become. This issue's written by the great Bill Mantlo, for example, but the pages are packed with heavily Claremont-inspired dialogue that's drenched in metaphors and high emotions that, for me at least, is really difficult to read. Again, I know other people like it, but this style of prose has made some of the recent comics (especially "Beauty And The Beast"!) hard to get through!

The actual storyline, as far as I can make out, sees Dagger wanting to join the circus but Cloak thinking she's wasting her talents. There's also a smarmy boyfriend and Cloak is... maybe evil? 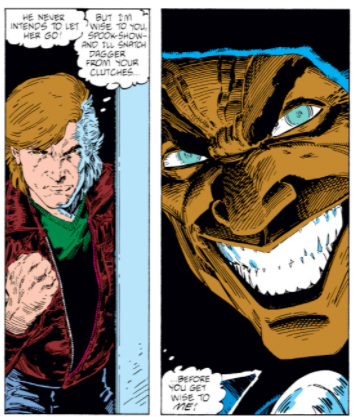 The story includes that really annoying thing where superheroes, who live in a superhero world where weird things happen all the time and there is literally a person called Nightmare who controls dreams and a version of Satan who steals souls, just shrug off Terrible Feelings and Dire Omens as "just a bad dream". Come on guys, this is your ninth issue, get with it! 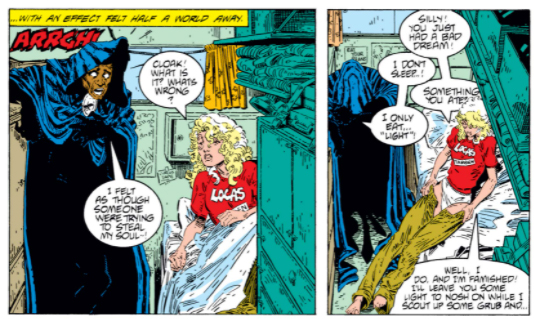 Also, Dagger seems to have forgotten that Cloak doesn't eat, which seems a bit insensitive. Anyway, some mobsters turn up and there's a big gunfight, so the circus fights back in an appropriately circus-like way, with strong-men and human cannonballs. 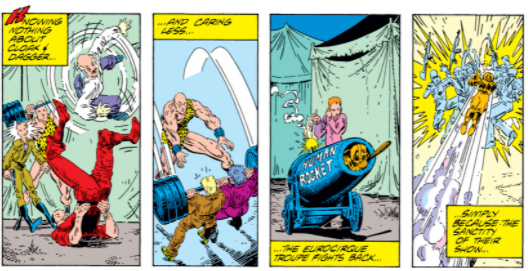 The post-Marvel Age period was known for its "Grim 'n' Gritty" nature, and that is very much on display here when the gunfight between mobsters, clowns various and an elephant ends, as it so often does, with the accidental death of a unicorn. 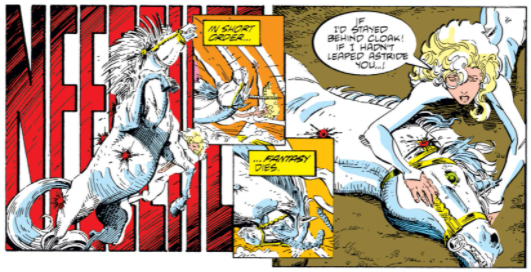 Heavy stuff! Dagger zaps the unicorn-murderers and then she, Cloak and the smarmy boyfriend teleport away to continue on their neverending quest to do whatever it was they were meant to be doing all along. And that's the lot, except for one last panel which - finally! - tells us why this comic is in a blog about Doctor Doom.

As Douglas Wolk recently pointed out in an episode of his (excellent) Voice Of Latveria podcast, Doom popping up right at the very end of a comic is something that happens an awful lot. Sometimes he's used as a big final twist, like in Strange Tales #167 and Fantastic Four #196, while other times, such as here and in Champions #15 he's used as an enticement to come back next time. It's certainly worked here, as we'll be back in a couple of weeks to see what happens when Doom meets Cloak and Dagger, but before then we're off to see yet another Secret Wars flashback with Spider-man!
A process blog about Doctor Doom in The Marvel Age written by Mark Hibbett