Blog: It's Beginning To Feel A Lot Like Christmas

First of all, sorry to anyone who came to look at the site this morning and found it claiming to have DISAPPEARED. My service providers had a "scheduled" maintenance this morning which a) they certainly didn't tell me they were going to have and b) went on for three hours longer than they eventually claimed it would. Still, we're back now, and with some GRATE news:

The Christmas Singles have arrived!

ZANG! Yes, I know I said this was going to be a download ONLY release, and it is, but we still needed a few copies for sending out as PROMO, and it is THESE that have arrived this morning. I've got to say, the people we use for small amounts of CDs (Short-Run in Bristol) are AMAZING. I only sent them the master CD on MONDAY, and they're here already! This puts me WAY ahead of schedule for sending them out, probably a couple of weeks before the release date of December 8th.

There will be a LOT more to be said about this, but for now here is the COVER: 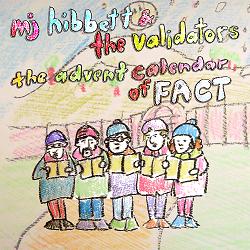