Welcome back, FACT FIENDS, for some cold hard MATH-based SCIENCE about where and when all these gigs have been happening.

Let's first of all take a look at what day of the week they occurred on. It's generally acknowledged that Saturday is the BEST day of the week to ROCK on, with Friday the second best as on those nights people are ready to PAR-TAY due to the lack of work next day. Sunday is thus the WORST as nobody wants to go out then, with Monday not far behind. THUS if we grade the days of the week from 0 (Sunday) to 6 and then perform an AVERAGE we should be able to chart the auspicious NESS of gigs during any particular year, as follows: 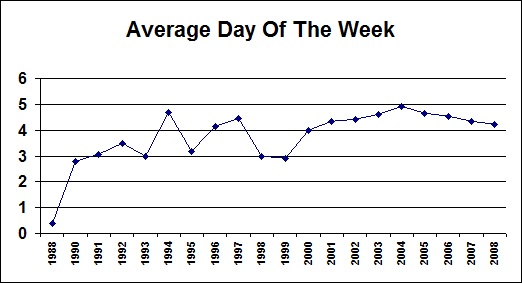 Oh dear! It rather appears that i PEAKED in 2004 playing, on average, early on a FRIDAY, and have since steadily declined to late on THURSDAY. How could this be?

Well, one pretty major factor is the sheer NUMBER of gigs I've been doing, as we can see by this handy NEXT graph, showing gigs played by year: 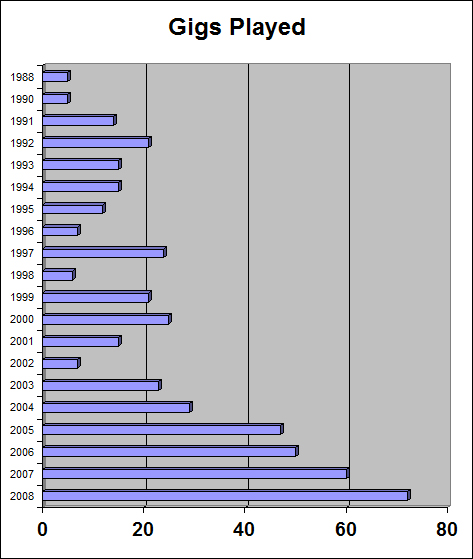 YOINKS! Here we can see that the apparent decline coincides fairly precisely with the sudden SURGE of GIGS. Up until 2004 I had hovered around the 20 gigs a year mark for... well, for the previous decade or so, but then suddenly LEAPT ahead to playing 47 gigs in 2005, 50 in 2006, 60 in 2007 and, this year, a whopping SEVENTY TWO. Quite apart from being REALLY A LOT OF GIGS, it also makes it much harder to score highly on average because there simply aren't enough SATURDAYS to go round!

SCIENCE! This year has also seen eight Totally Acoustic Nights, which are always on a Tuesday, and of course that week in Edinburgh which went on for... Well, for a whole week, which would also explain the continuing drop in average day.

So I'm not terribly worried about this "decline" - INDEED it seems to be holding up a lot better than, say, THE ECONOMY, once you take into account the massive increase in ROCK ACTION and as we saw yesterday, even with so many more gigs I am still having SLIGHTLY MORE FUN! But where, I IMAGINE you are desperate to know, did all this GOOD TIMES occur this year? NEXT STAT TOMORROW!