I knew we were in for a good night in Lewisham last night when I arrived at The Fox And Firkin to find THIS standing outside: 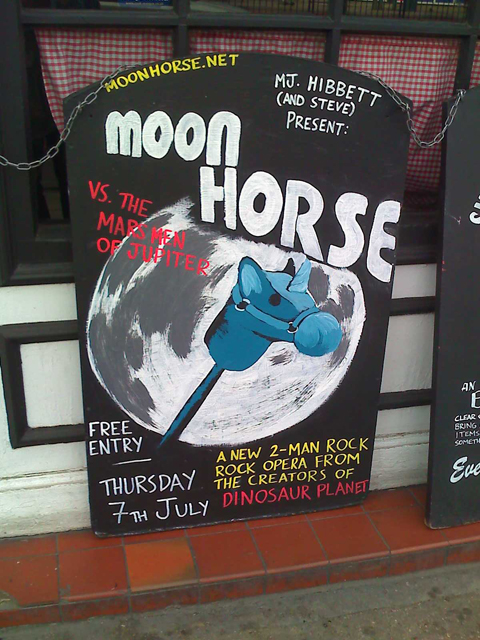 GRATE, isn't it? Mr S Hewitt arrived at the very same moment (we had unknowingly come on the same train) and we entered the pub for a much-needed PINT - needed ESPECIALLY in Steve's case as he had been ABROAD drinking Continental Lagers. There was catching up a little bit of discussion of THE SHOW (we hadn't done it for over a FORTNIGHT, which is the longest time with Moon Horse either of us have gone since we began rehearsals!) before PALS VARIOUS arrived and CHAT commenced.

I was a little NERVOUS about the whole thing - we'd not gone through it for a couple of weeks, so I was unsure ANYWAY, and then we found that my guitar pick-up was playing up again, so I'd need to be miked up. This isn't a problem really, but the need for amplification ANYWAY was a bit of a worry. We usually do these shows Totally Acoustically because it allows for much more LARKING ABOUT, but The Fox is quite big AND not exclusively being used as a venue for US, so we needed it.

In addition we'd discussed some CHANGES, to try and speed things up/cut the running time a little, but hadn't really had time to go through them properly. Neither of us were entirely sure WHICH we were going to change and which we'd leave as they were for now.

All these things combined to make the start of proceedings SHAKEY - I realise now it probably wasn't helped by us spending the introduction saying "This probably isn't going to be all that GOOD" (paraphrasing, but still) - and for the first ten minutes ago I was thinking "Hang on! This is RUBBISH! OH NO! WHAT HAVE WE DONE!" In discussions with my colleague afterwards it turns out I was not alone on stage in thinking this, but as we got into our stride the LARFS started to come and FUN started to be had. In fact, by the time we got to Episode Two we, and indeed the audience, were THOROUGHLY enjoying ourselves, and the final Episode was a FESTIVAL of GUFFAWS.

Crikey tho, it just shows how important it is to Start Confidently! But once that hurdle was over, as I say, it went surprisingly well. I was especially gratified, once again, by how much everyone seemed to like TIDDY... which, once again, led to me being Genuinely Upset when, during "Only A Robot", Tiddy's BIG MOMENT, everyone was laughing at the ANTICS going on behind me. We were like some kind of Little And Large for the 21st Century - the temptation to say "Eddy! Stop spoiling my song!" was almost overwhelming.

Afterwards everyone seemed VERY keen - "funnier than Dinosaur Planet" seemed to be a general consensus, which was MOST PLEASING as that had been the Core Intent! Interestingly the big NOTE we got from Mr Johnny Yeah was that we should do PROPER Tap Dancing during the Tap Dancing Interlude. We'd always PLANNED to do this, but never really got round to it. Clearly some TAP VIDEOS needed to be sourced from YouTube this weekend!

So yes, all in all it was ACE - we learnt a LOT about what we need to do with the show, which is the whole POINT of Previews, I guess - and were also relieved to find that yes, it IS funny and DOES sort of work.

The most interesting thing for ME tho is how SILLY the whole thing is, and how we - or rather, I - are quite happy to be LOOSE about the whole thing. I must admit that I was a bit STERN about sticking to THE SCRIPT for a lot of the time doing Dinosaur Planet but this time around I find that I'm not too bothered at ALL when we deviate or change bits. Maybe it's because we have MATURED as a DOUBLE ACT... or maybe it's just that I haven't already LIVES with this one for a year, nor RECORDED the whole thing already for an album!

Anyway, we finished off the evening with an INTERVIEW for Kooba Radio with Mr J Yeah and then we headed out into the night. Based on our DLR discussions I have drafted an EIGHTH (8th!) version of the script, ready for us to give it a go in CROYDON on Tuesday. We're playing The Green Dragon, do pop along if you're around that area, it is pretty much guaranteed to be DAFT!